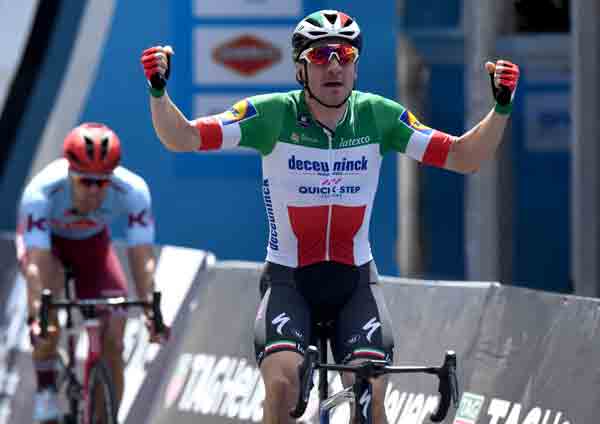 Viviani was able to stay with the lead group over four tough climbs and emerge from the slipstream of Deceuninck-Quick Step teammate Michael Morkov in the final metres to pip Ewan at the post.

Lotto Soudal rider Ewan was unlucky to find himself boxed in at the start of the final sprint and while he finished fast, he ran out of road to overhaul Viviani who finished in 3hr 54min 35sec. Deceuninck Quick-Step rider Elia Viviani of Italy celebrates with the trophy after crossing the finish line to win the men's event at the Cadel Evans Great Ocean Bicycle race in Geelong from Lotto Soudal’s Calab Ewan of Australia on January 27, 2019.

The 163 kilometre (101 mile) race, which starts and finishes in Geelong, outside Melbourne, and takes in the world-renowned Great Ocean Road, has seen a different nationality win each year since its inception in 2015.

Viviani came to Australia on a mission after being beaten into second last year by Jay McCarthy, who could only finish eighth this time, and he was over the moon.

“It's feels amazing. I was really focused on this race,” said Viviani. “I was really happy with the performance of the team.

“I have to say thanks to the best team in the world, with Michael (Morkov) doing a fantastic lead-out for me. With his help, I'm always confident of taking the win.”

The Italian added on Twitter: “Boom! What a way to end this Australia adventure with the boys.”