An ugly act of religious fanaticism in Sweden - GulfToday

An ugly act of religious fanaticism in Sweden 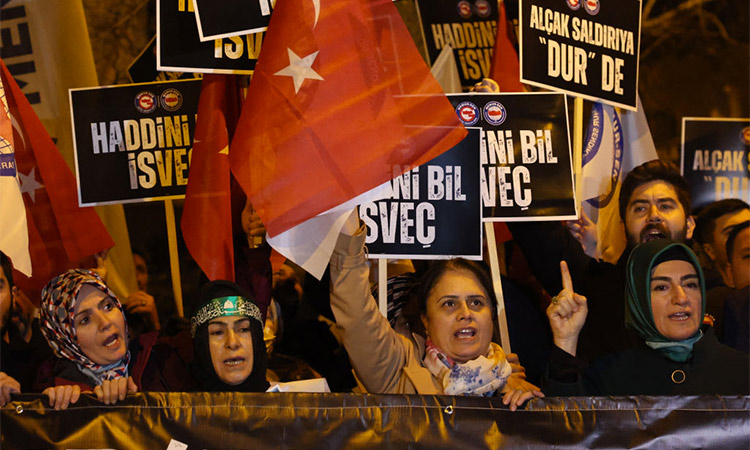 Protesters chant slogans during a demonstration outside the Sweden’s embassy in Ankara. (AFP)

The extremely provocative act of right-wing extremist Swedish politician Rasmus Paludan burning the copy of Holy Qur’an in front of the Turkiye embassy in Stockholm on Saturday was an act of political hara-kiri for Sweden. Turkiye President Recep Tayyip Erodgan was opposing the entry of Sweden into NATO because he argued that Sweden was harbouring Turkish rebels, mainly Kurdish, in the country. Turkiye, a member of NATO, the only non-European country, and admission of members into the Western military alliance is based on consensus. The lone objection of Turkiye has turned out to be a real hurdle for Sweden. Paludan’s act of burning the Holy Book had turned what was a political and diplomatic stand-off between Sweden and Turkiye into a religious confrontation, not just against Turkiye but against the Islamic world of Arab, African, Asian nations.

Paludan is not a lone figure in the European political arena. There are many right-wing extremists like him who are actively engaged in racist and anti-Muslim, anti-ethnic stances. They spearhead a hate campaign, which as yet is confined to a small group, but it threatens to engulf liberal European democracies. The right-wingers use the democratic right to freedom of speech to spread hatred and fear, which in turn undermines the democratic political systems in the West.

It is to be remembered that European governments, including those headed by the liberals, had not allowed Turkiye to join the European Union (EU), though Ankara was keen on being part of it, because Turkiye was a Muslim country, and it was also non-European.

Paradoxically, Turkiye is respected as a member the military alliance, NATO, because security experts and diplomats in Europe recognise the geo-strategic location of Turkiye in relation to Russia, as also the fact that Turkiye was a key element in European politics through the 18th and 19th centuries because many of the Balkan countries were part of the Ottoman Empire until it broke at the end of the First World War, and Mustafa Kamal Ataturk turned Turkiye into a modern republic.

The Swedish government should have realised the consequences of Paludan’s act of cultural terrorism and how it would impact its image as a liberal democracy in the eyes of the world. A diplomatic tussle has been turned into a cultural and civilisational war. It is indeed the case that a majority of Swedish politicians, including the conservative elements, understand that the world is made up of different religions and cultures, and all should be equally respected. But if they fail to rein in the racists and religious fanatics in their country, then it would be disastrous for Sweden’s international relations.

The response of the Arab government and organisations to Paludan’s uncouth protest has been dignified and generous. Al Azhar Sharif, the oldest seat of higher learning in Cairo, has issued a statement saying that the burning of Islam’s Holy Book did not take away from the fact that the faith of the more than billion Muslims has only been strengthened further. The strongly-worded statement from the university said, “Grudges of the misguided criminals and actions of the promoters of fanaticism and sick souls, who have black records in the history of fanaticism, hatred, and wars of religion, will not affect the sanctity of the Holy Qu’ran.” It has urged the international community to condemn the criminal act. It also said that allowing such acts would “impede efforts to promote peace, interfaith dialogue and communication between East and West, as well as between the Islamic world and the West.”

What is needed now is a strong condemnation of Paludan’s politics of hatred by the other parties and politicians, as well as the Swedish government. The message should go out that European governments show zero tolerance towards hatemongers in their societies.