India has a Champion of the Earth - GulfToday 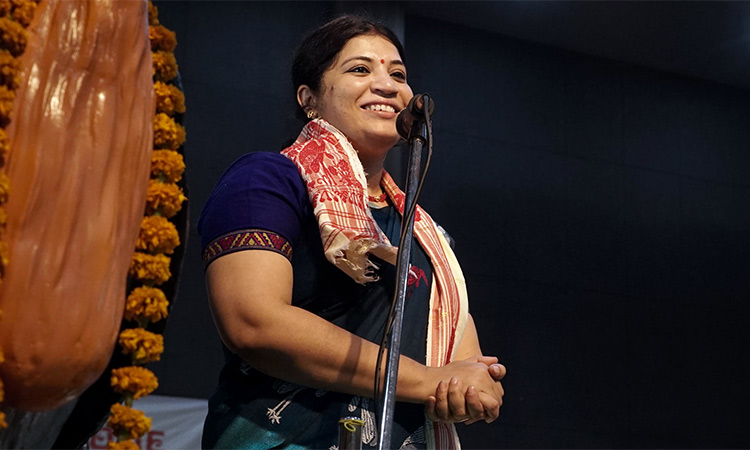 India’s Purnima Devi Barman, an Assam-based wildlife biologist, is one of the five ‘Champions of the Earth’ for this year, as announced by the United Nations Environment Programme (UNEP). The other honourees include Arcenciel (Lebanon); Constantino (Tino) Aucca Chutas (Peru); Sir Partha Dasgupta of the United Kingdom and Cecile Bibiane Ndjebet (Cameroon). In April 2022, Sir David Attenborough was also recognized with the prestigious Champions of the Earth Lifetime Achievement award. The annual Champions of the Earth award is the UN’s highest environmental honour. It recognizes outstanding leaders from government, civil society, and the private sector.

Barman has been working with local communities – women, specifically – in Assam for more than a decade now to conserve the greater adjutant stork, an endangered wetland bird whose numbers have been declining due to habitat destruction and cutting down of nesting trees. She won the award this year in the ‘Entrepreneurial Vision’ category, for her trail-blazing work in protecting these greater adjutant storks, called ‘hargila’ in Assamese. Hargilas are five-foot-tall birds that dwell in wetlands in some parts of southeast Asia including India and Cambodia.

“Purnima Devi Barman’s pioneering conservation work has empowered thousands of women, creating entrepreneurs and improving livelihoods while bringing the greater adjutant stork back from the brink of extinction,” said Inger Andersen, Executive Director of UNEP in a UNEP press release, “Dr. Barman’s work has shown that conflict between humans and wildlife can be resolved to the benefit of all. By highlighting the damaging impact that the loss of wetlands has had on the species who feed and breed on them, she reminds us of the importance of protecting and restoring ecosystems.”

There are only 1200-odd hargilas remaining in the world, as per a 2016 IUCN Red List update which lists the bird as ‘Endangered’. In India, hargilas are found in Assam and Bihar. Assam is home to the largest population – around 1000 individuals – of these birds, according to Barman.

The UNEP website states that UNEP received close to 2200 nominations for its annual Champions of the Earth award in 2022, a new record. The UN’s highest environmental honour recognizes individuals and organizations from a number of fields, including civil society, academia and the private sector, which are blazing a trail in their efforts to protect our natural world. To highlight the importance of ecosystem restoration, nominations of pioneers whose transformative action is healing our planet were encouraged, affirming that humanity has the ingenuity and ambition to protect the environment and reverse ecosystem degradation. This follows last year’s official launch of the UN Decade on Ecosystem Restoration, a rallying call to urgently protect and revive ecosystems on every continent and in every ocean.

As the UNEP website highlights, ecosystems support all life on earth yet face grave threats. Every year the planet loses forest cover equivalent to the size of Portugal, with disastrous consequences for the climate crisis and biodiversity. Oceans are being polluted and overfished, with 11 million tonnes of plastic ending up in marine environments annually. Yet the challenge is not insurmountable. People around the world are stepping forward every day to pioneer innovative ways to restore nature and secure a healthy planet for future generations. The Champions of the Earth are helping to lead that push. Their initiatives confront the triple planetary crisis of climate change, nature and biodiversity loss and pollution and waste. They are a reminder that environmental sustainability is key to achieving sustainable development.

The Champions of the Earth award this year celebrated visionaries in three categories: (1) Inspiration and action; (2) Entrepreneurial vision; and (3) Science and innovation.

The award recognizes individuals and groups who are taking transformative action to change the world. To date, 106 laureates, ranging from heads of state to community activists, to captains of industry, to pioneering scientists, have been honoured as Champions of the Earth. Last year’s laureates included Barbados Prime Minister Mia Mottley, The Sea Women of Melanesia, Gladys Kalema-Zikusoka from Uganda and Maria Kolesnikova from the Kyrgyz Republic.

The UN General Assembly has declared the years 2021 through 2030 the UN Decade on Ecosystem Restoration. Led by UNEP and the Food and Agriculture Organization (FAO) of the UN, together with the support of partners, it is designed to prevent, halt, and reverse the loss and degradation of ecosystems worldwide. It aims at reviving billions of hectares, covering terrestrial as well as aquatic ecosystems. A global call to action, the UN Decade draws together political support, scientific research, and financial muscle to massively scale up restoration.