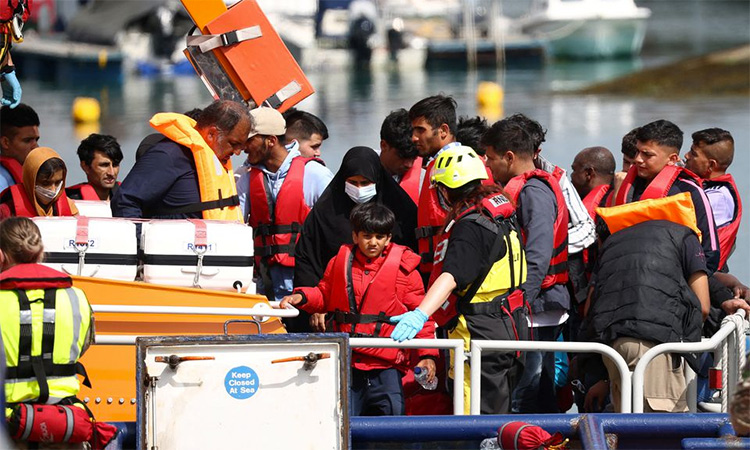 Migrants arrive at Dover harbour on board a Border Force vessel, after being rescued while attempting to cross the English Channel, in Dover, Britain. Reuters

Today’s immigration figures show the highest levels of net migration since records began, at about half a million over the year to June. Overwhelmingly, this reflects rising inflows from outside the EU. Unsurprisingly, this has already generated some hysterical reactions from the usual suspects. However, given trends in visas over the period analysed, it’s not a great surprise.

Record immigration is driven by special factors, not least the reopening of travel and the economy post-pandemic, and inflows from Ukraine (and to some extent Hong Kong). Moreover, the ONS has also changed its mind about what happened during the pandemic, revising down its provisional estimates by several hundred thousand.

So, today’s statistics are not as dramatic as they look. Over the three years to June 2022, net migration averaged about 250,000 annually, of which a bit over 200,000 was from outside the EU. This is not that different from the general post-referendum trend.

Nevertheless, the statistics do confirm my earlier analysis that predicted that the new, post-Brexit system would result in a reorientation of UK migration patterns from the EU to the rest of the world, with workers and students from South Asia and Africa substituting those from the EU.

But the public debate about what this means for the UK economy and labour market is confusing and contradictory, to say the least. Some in the government — including the home secretary — appear to believe that the new system is far too liberal, and was “created to increase” work-related migration.

Nick Timothy, Theresa May’s former chief of staff, is particularly exercised that too many people are coming from “poor countries”. Meanwhile, there is a clear consensus among business groups that the new system, and in particular the end of free movement, is leading to labour shortages, which are inhibiting growth.

In fact, the data suggests both are wrong (or right). There are indeed “labour shortages” in some sectors that were heavily dependent on EU-origin workers, especially accommodation and hospitality. But work-related migration flows overall have not declined: there has been a sharp increase in those coming to work under the new health and care visa, more than offsetting falls in EU migration; while other sectors such as ICT and professional and business services have seen more modest rises.

This readjustment, from EU to non-EU migrants is broadly what the new system was designed to achieve: it’s a feature, not a bug. Indeed, in sharp contrast to trade, where it is almost universally acknowledged that Brexit has, as predicted, damaged the UK’s economic performance, the UK’s post-Brexit migration is delivering more or less what Vote Leave promised (even if not necessarily what all Brexit voters wanted). As the Office of Budget Responsibility has pointedly observed, immigration is about the only area where policy is contributing to higher economic growth. Politicians seem to be unwilling to acknowledge this. Indeed, when asked directly about labour shortages, the prime minister waffled hopelessly about small boats, while Keir Starmer seems to believe that businesses prefer skilled workers from abroad and simultaneously depend on “low pay and cheap labour”. But the longer-term impacts on the UK economy of this shift will be profound.

Will the shift towards higher-skilled occupations and sectors help increase (as intended, and as most economists would expect) not just the size of the economy, but GDP per capita and productivity? Or will the UK, stuck in a post-Brexit low growth rut, become less attractive to the “brightest and best”; who of course have other options? Meanwhile, how will other sectors adjust – by reducing employment and output, or by increasing productivity through investment and training, and perhaps increasing wages? So far, at least, there’s little sign of the latter. Not only are real wages falling for almost everybody, but pay in the most affected sectors doesn’t appear to have performed any better. As economists have long argued, the idea that ending free movement would magically boost the wages of low-paid workers was never very realistic.

Nevertheless, amid the general doom and gloom over the UK economy, the figures are good news. The end of free movement doesn’t mean the UK is closed to migrants; it’s just open in a different way. The long-term effects will be profound.