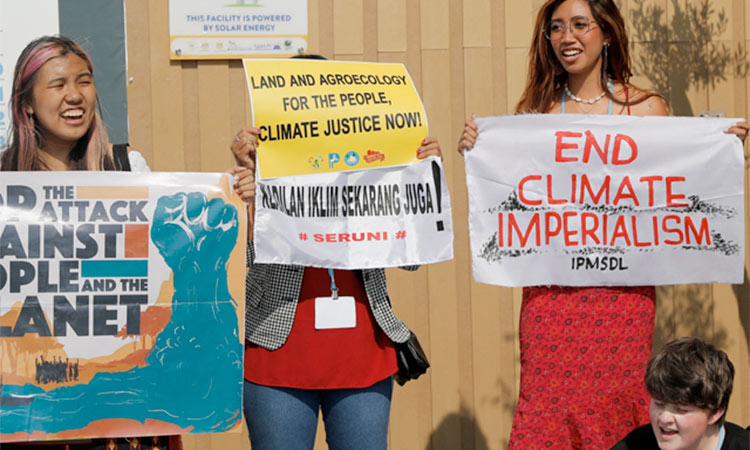 Youth activists during a demonstration at the Sharm el-Sheikh International Convention Centre, during the COP27 climate conference in Egypt.

The November 2023 UN climate change conference, COP28, hosted by Dubai is certain to be an historical gathering because it will have to build on Egypt’s disappointing COP27. The Dubai summit is supposed to “stocktake,” or assess recent progress and press for implementation of measures to save the planet.

The 1994 Conference of the Parties, COP1, brought together the 197 signatories of the UN climate change treaty in order to establish limitations on emissions harmful to the planet. Subsequent summits have expanded to limit emissions to 1.5 degrees Celsius above pre-industrial levels but the world’s biggest emitters have not met goals they set for themselves, exacerbating global warming and creating a climate emergency.

Egypt’s COP27 — which drew 25,000 people from around the world — was dominated by the issue of an estimated $500 billion in “loss and damage” to developing nations by global warming caused by the rich industrialised countries. The summit, held between Nov.6-18, went 36 hours beyond its closing session because the US and China, for example, did not want to be compelled to contribute to a “loss and damage” fund promised 13 years ago at COP 15 in Copenhagen, Denmark.

As the time for debate in Sharm al-Shaikh ran out, the European Union put forward a proposal for a such a fund with a “broad donor base” which could include China, the Gulf counties and Saudi Arabia, which are wealthy but still classified as developing countries. While $2.3 trillion is needed by 2030, the fund is, so far, empty, and contribution levels have been left to be negotiated in Dubai, a year from now.

This accord was the main achievement of COP27. The summit also reaffirmed the longstanding commitment to limit global warming to 1.5 decrees Celsius specified in the 2016 Paris agreement but downplayed this target. There was however, no criticism of those who have not honoured this commitment despite the leakage into the atmosphere of 40 billion tonnes of carbon dioxide since Scotland’s COP26 a year ago.

The third significant gain was the pledge extracted by US climate envoy John Kerry from 150 countries to join the Global Methane Pledge, a 30 per cent cut in methane by 2030.

On the negative side, there was no mention of plant and animal species losses due to rising temperatures, no reductions on the production of coal, oil and natural gas, and no advice on how to adapt to unusual heat, drought, floods, rising sea levels and crop destruction.

UN climate chief Simon Stiell argued that time was short to implement agreed targets and criticised plans that governments had submitted on cutting greenhouse gas emissions by 2030. He said these proposals did not combine to limit global temperature rises that adhere to scientific norms. “The [country plans] just don’t add up,” he said. “Keep your eye on 2030. That is our horizon.”

China, the largest global emitter has made a commendable effort to shift to green energy technologies, but that country continues to depend on and build coal-powered power plants. The US, the second largest emitter, has not begun to make the transition from polluting emissions to clean energy and has suffered drought, forest fires, floods, hurricanes, and heavy snow and rainstorms while climate change deniers oppose and to counter emissions regulations and slow the shift to solar, wind and water power. Britain’s climate has grown warmer and weather increasingly unstable while Australia has faced drought, fires and floods. Canada’s average temperature has risen by 1.7 degrees Celsius, leading to extreme weather events, deforestation and melting glaciers.

Carbon Brief has revealed that the US, Britain, Australia, and Canada have “fallen billions dollars short of their ‘fair share’ of climate funding for aiding developing countries” in the  adoption of green technologies and phasing out of facilities which emit polluting gases. The four pledged in 2009 to contribute a total of $100 billion a year by 2020. This has not exceeded $83 billion in recent years and is not expected to meet the original commitment before next year.

The US contribution, based on long-term emissions, should be $40 billion but it donated only $7.6 billion in 2020. Australia and Canada provided about a third of funding while the UK supplied three-quarters, with $1.4 billion short.

By contrast, Switzerland gave four times more than assessed; France and Norway more than than three times the amount; Japan supplied more than double. The finance from Japan and France was largely in loans while the US, Canada, Australia and the UK extended mostly grants.

Commenting on COP27, head of the Elders group and ex-Irish President Mary Robinson stated, “In a year of multiple crises and climate shocks, the historic outcome on loss and damage at Cop27 shows international cooperation is possible, even in these testing times. Equally, the renewed commitment on the 1.5 global warming limit was a source of relief.

“However, none of this changes the fact that the world remains on the brink of climate catastrophe. Progress made on mitigation since Cop26 in Glasgow has been too slow. Climate action at Cop27 shows we are on the cusp of a clean energy world, but only if G20 leaders [of industrialised states] live up to their responsibilities, keep their word, and strengthen their will. The onus is on them. All climate commitments must be transformed into real-world action, including the rapid phase out of fossil fuels, a much faster transition towards green energy, and tangible plans for delivering both adaptation and loss and damage finance.

“We avoided backsliding and made progress in Sharm el-Sheikh. Now leaders must stop sidestepping and fulfil their promises to safeguard a liveable future.” They could be held accountable next November in Dubai if they fail.