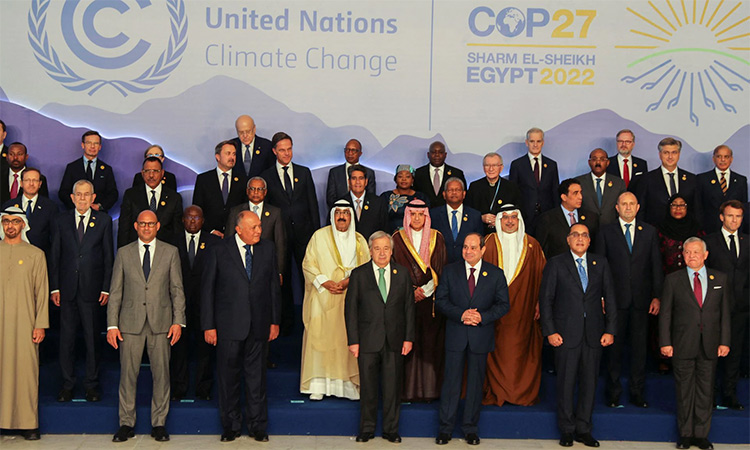 Leaders of COP27 member countries pose for a family photo during the climate summit in Sharm el-Sheikh, Egypt. Reuters

The rich and industrialised countries have long resisted and skirted the issue that the poor and developing countries are paying the price for the acts of commission and omission by the industrialised, developed and rich countries of the West.

But the point was brought on to climate agenda for the first time in decades at the end of the climate summit at Sharm El-Sheikh in Egypt when it ended in the early hours of Sunday morning, a day later than the scheduled conclusion on November 18.

It has been agreed that a fund will be set up for the “loss and damage” that poor countries are facing due to extreme weather conditions, a consequence of climate change. The south Pacific island-nation Tuvalu finance minister Seve Peniu said, “Three long decades and we have finally delivered climate justice.

We have finally responded to the call of hundreds of millions of people across the world to help them address loss and change.” Pakistan’s environment minister Sherry Rehman was quite emphatic that the establishment of the global fund to help loss and damage in poor countries is no charity.

She said, “It is clearly a down payment on the longer investment in our joint future.” Of course, the quantum of the fund is yet to be determined. It is to be noted that the 2009 promise of developed world to contribute $100 billion to help developing countries to transit to green energy technologies remains a dead letter.

The developed countries had their own agenda at COP27, and they wanted to specify the restrictions on carbon emissions on the part of all countries which would have placed a great burden on the economic development of the poor countries.

The mood of the dissatisfied and discontented West was reflected in the statement of the executive vice president of the European Union (EU) Frans Timmermans: “What we have in front of us is not enough of a step forward for people and planet. It does not bring enough added efforts from major emitters to increase and accelerate their emission cuts. We have all fallen short in actions to avoid and minimise loss and damage.

We should have done much more.” German foreign minister Annalena Baerbock echoed the unhappiness of the West with the outcome at COP27: “It is more than frustrating to see overdue steps on mitigation and phase-out of fossil energies being stonewalled by a number of large emitters and oil producers.”

The developed countries wanted the phrase “phase out” for coal but countries like India opposed it. The demand was not to single out coal as the culprit with even European countries going back coal in the wake of the Russia-Ukraine war. So, it was decided that all fossil fuels should be included.

But realists are pointing out that it would not be feasible to phase out fossil fuels completely in the near future and that green technologies of power generation and other energy uses are still to be worked out. The positive aspect is despite their reservations all the countries at COP27 agreed to the setting up of the global fund for loss and damage due to extreme weather events.