Truss is reassuring her backbenchers she is in listening mode - GulfToday

Truss is reassuring her backbenchers she is in listening mode 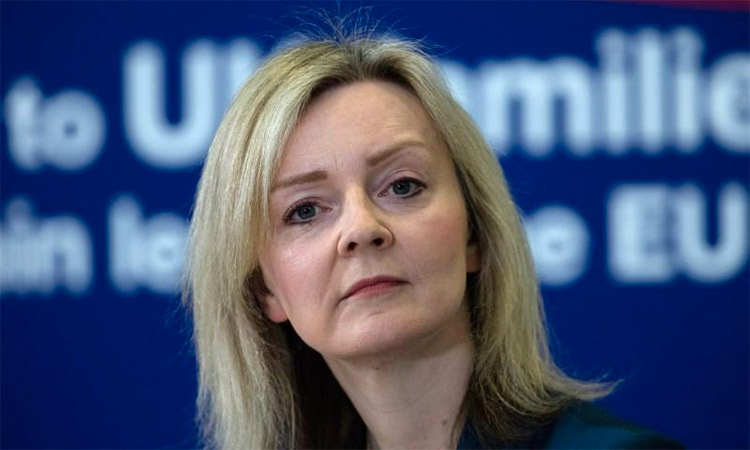 “This is reassurance week,” one ally of Liz Truss told me. There’s one problem: the financial markets, Conservative MPs and in turn, the public are far from reassured, despite the government’s more conciliatory tone. Last month’s mini-Budget already seems like a long time ago but it continues to haunt Liz Truss and Kwasi Kwarteng. They are struggling to repair their own damage, and convince the markets, Tory MPs and voters that they genuinely believe in fiscal responsibility (and are not just mouthing the words).

Their new, friendly mask cannot hide their true instincts, which were displayed in full technicolour in the mini-Budget. That’s why Andrew Bailey, the Bank of England governor, is in effect telling the government that the Bank will no longer bail it out, prompting another fall in the value of the pound. This might force ministers to act to prevent the collapse of some pension funds, adding to the government’s ever-growing list of spending commitments. Jacob Rees-Mogg, the business secretary, tried unconvincingly today to blame the market turmoil on the Bank raising interest rates by less than the US Federal Reserve, but there’s no escaping the fact that bond investors have decided that the UK has become a riskier bet following the mini-Budget. It’s not up to the Bank to correct that impression; the government needs to restore confidence and produce a credible plan for the public finances when the chancellor issues his medium-term fiscal plan on Oct.31.

The markets and a growing number of Tory MPs want Kwarteng to stage a further retreat on his remaining tax cuts – by no longer scrapping the proposed rise in corporation tax and lowering the basic tax rate from 20p to 19p in the pound. Both could and should be delayed. In a highly significant move, as The Independent reveals today, Truss and her team are now reviewing all the measures in the mini-Budget.

Although Truss and Kwarteng are ideological soulmates who have vowed not to repeat the disagreements of the Johnson-Sunak era, Number 10’s “review” is bound to cause some tension between them. A further retreat over tax cuts would be humiliating for Kwarteng. But Truss would hardly escape the fall-out. As one Tory MP put it: “They were both in their bubble, convinced the mini-Budget and its tax cuts were brilliant and that everyone else would love it. Now they’re taken aback by the reaction. How naïve can you get?”

As the penny drops, it’s dawning on ministers that there is no point in the chancellor promising huge spending cuts – up to £62bn, according to the Institute for Fiscal Studies – to balance the books because the markets would judge (correctly) that Tory MPs would never vote for them. Similarly, brave talk about supply-side reforms to boost economic growth has run into a wall of reality now ministers look at the messy detail; there are few magic switches to be flicked.

Truss is reassuring her backbenchers she is “in listening mode”. But critics are unimpressed by her “charm offensive”. Old jokes have been revived: MPs predict it will be more offensive than charming. Offering Tory backbenchers lunches or dinners at Number 10, an occasional chat in the Commons tearoom or addressing the 1922 Committee, as Truss is doing today, rarely moves the political markets.

She will doubtless say lessons have been learnt and promise her fractious, anxious backbenchers more say over government policy. I remember David Cameron and Theresa May saying the same, but it never really materialised. Although Truss appointed Greg Hands, a Sunak supporter, as international trade minister, that didn’t erase her original appointments of friends and acolytes and her virtual exclusion of Team Sunak.

Similarly, Truss and Kwarteng are belatedly love-bombing the institutions designed to provide reassurance, after foolishly undermining them and adding to the market turmoil – the Office for Budget Responsibility fiscal watchdog, the Treasury and the Bank (the latter through gritted teeth after Bailey’s comments in Washington last night).

Political capital and precious time were needlessly wasted on sacking Tom Scholar, the Treasury’s permanent secretary. Truss and Kwarteng agreed to install Antonia Romeo, a fellow reformer who would challenge “Treasury orthodoxy,” but Truss blinked at the last minute and appointed another Treasury man in James Bowler. The right call, but again the mask cannot hide the true colours and original intentions. No amount of warm, reassuring words will make Kwarteng’s sums add up. It is increasingly likely he will have to retreat over more of his reckless, unfunded tax cuts. As for Truss, can she recover from her catastrophic start? As the days go by, it’s getting more difficult to see how.