More guns everywhere do not make us safer - GulfToday 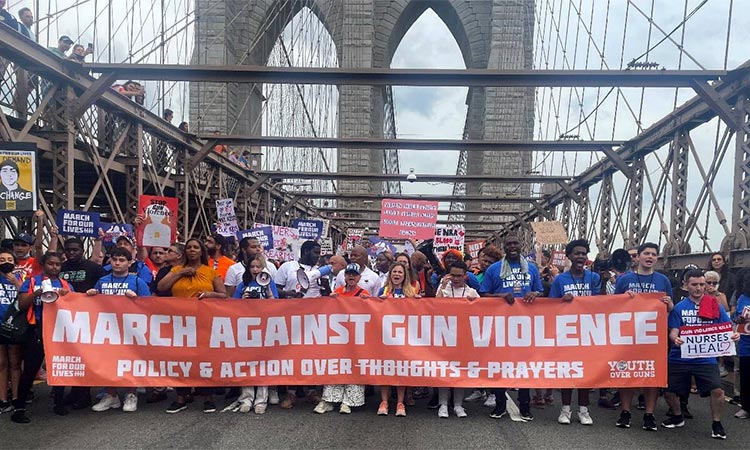 Demonstrators hold placards at a rally against gun violence in the United States. Reuters

During a recent campaign event in Harford County, Maryland, a woman asked Heather Mizeur, the 1st District Democratic candidate for Congress, about keeping guns away from dangerous people.

While she agreed with Mizeur that more could be done legislatively to ensure public safety in legal gun purchases, the woman expressed dismay at the endless flood of illegal guns used in crime in Baltimore. Indeed, that’s a huge problem, and an exasperating one. For years, police have said the majority of illegal firearms in Baltimore come from states with more liberal gun laws.

Last year, partnering with Bloomberg-funded Every Town USA to track the flow of illegal guns into Baltimore, Mayor Brandon Scott reported that more than 60% of firearms seized by police were from outside Maryland while 82% were from outside the city. So the woman who spoke to Mizeur in Havre de Grace was understandably frustrated, and she spoke for a lot of us: we are surrounded. There are more guns than ever in the United States, an estimated 400 million of them, legal and illegal. Look at the recent history: as gun laws became more liberal, with the full support of Supreme Court decisions that expanded 2nd Amendment rights, the country became more violent. Nearly 49,000 people were killed by guns (murders and suicides primarily) in 2021, according to the Centers for Disease Control and Prevention, and that’s considered a record for a single year.

Nearly 80% of US murders involved a firearm, according to the Pew Research Center. States with the highest rates of gun deaths are Mississippi, Wyoming, Missouri and Alabama.

In Baltimore, of course, the violence continues, with 254 homicides so far this year. “When will it stop?” asked a frustrated resident of a Northeast Baltimore neighbourhood where three women were shot.

When will it stop?

That question overwhelms me with pessimism, and a new report from the Johns Hopkins Bloomberg School of Public Health doesn’t make me feel much better. It found a correlation between legally purchased guns, liberal state laws and an increase in violence.

Using special modeling based on crime data, researchers at Bloomberg’s Center for Gun Violence Solutions looked at 34 states that liberalized their systems of permitting people to carry concealed firearms over three decades, from 1980 to 2019. In those states, in the first 10 years of liberalization, the average rate of assaults with firearms increased 9.5%. The more people were allowed to carry guns without restrictions, the more gun violence occurred. No one should be shocked by that finding, but the Hopkins report supports the idea that more liberal gun laws do not make us safer. And it’s not just illegal guns causing death and injury.

“In general, violent crime increased after states loosened concealed carry permitting requirements,” says Mitchel Doucette, a scientist in the Department of Health Policy and Management and director of research for the gun violence center. “Allowing more individuals to carry concealed guns in public — including some who would have previously been denied carry permits due to prior arrests or restraining orders — can increase inappropriate use of firearms in response to interpersonal conflicts, disputes or other situations.”

Some states, Maryland being one, kept restrictions on concealed carry permits. If you wanted a permit to carry a small, easily concealable handgun in Maryland, you had to apply for one from the Maryland State Police, and you had to have a good reason. Certain business owners and people who had been threatened or physically abused sought a concealed carry permit for self-defense. That always made sense. It was prudent.

But then, in June, the Supreme Court tossed aside the concept of “may issue” — versus “shall issue” — in the state granting of permits. The court ruled unconstitutional New York’s law requiring that people who wanted to carry a gun demonstrate that they had proper cause or special need. Permits can still be required, but the state’s authority is now greatly reduced. Maryland Gov. Larry Hogan wasted little time in making the gun-obsessed happy. He issued an order to bring state policy in line with the Supreme Court ruling, and a flood of applications for permits quickly followed.

To obtain a permit, Maryland will still require an effort, including a firearms training class, for one thing, and that might be the only good news in the Hopkins report. It found that states that kept some requirements for concealed carry permits — live-firearms training, screening of applicants for histories of instability or violence — did not experience quite as much violence as states with the most liberal laws.