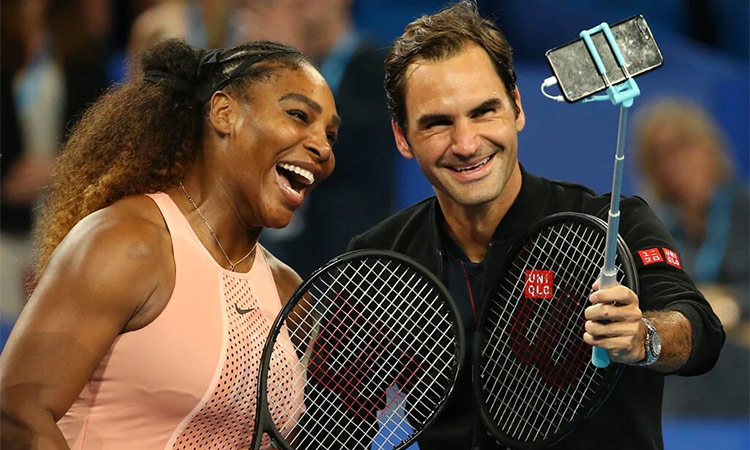 Serena Williams and Roger Federer have dominated the women’s and the men’s tennis for two decades this century. (Image via Twitter)

Serena Williams announced at 40 with 23 Grand Slam titles under her belt and a fighting career from 1999 when she won her first Slam title at the US Open that she would move away from tennis two weeks ago. Roger Federer announced his retirement at 41 with 20 Slam titles to his credit. The two have dominated the women’s and the men’s tennis for two decades this century. And each of them played the game differently.

Williams and black and woman, and she had to fight more battles on the way, first against champions of another generation like Jennifer Capriati and Lindsay Davenport, and her own contemporary, Martina Hingis, a champion in her own right. It was not easy for her. She was not only pitted against great and good players, but she had to carry the burden of her race as well. The umpires and linespersons would call wrong, and she had to pay dearly. She would rage and there would be outbursts, which a white woman player would never have to do. And there were the off-court tiffs with rivals like Hingis. It verged on the ugly.

But they passed. What we saw was Williams bringing power and passion to her play, and there was purpose behind that power and that passion. She came from a poor background, and her father trained her and her sister Venus to win and to make it big in tennis. The Williams sisters had no option but to succeed. And it was not easy for her to accept the inevitable that other players would come and push her out of the top place as she did others early in her career. So her loss to Naomi Osaka, the Haitian-Japanese-American player, in the US Open Final in 2018, and her anger and disappointment overshadowed the victory of Osaka. But it was a grand saga. She remained the Number One player in the ATP rankings for 319 weeks, and she stayed at the top for 186 weeks consecutively. She became an inspirational figure for scores of players from different racial backgrounds who came after her, including Osaka.

Federer was a different kind of champion. He won his first Slam title at Wimbledon in 2003. And he brought in a different style. He played the perfect game. There was no technical flaw in any of his shots, and he would play all of them with finesse. It all looked effortless as he served, volleyed and rallied. He was athletic grace personified. There was no show of passion or power. The passion was invisible, and the power could be felt but not seen. While Ralph Nadal showed immense power and Novak Djokovic displayed endurance of a rare kind, Federer remained unflustered, and played like a god who did not have to exert and who did not tire. And there were few controversies in the playing moments either on or off the court. What we forgot as we admired his superb play was that he was white and male. It was in the background and Federer never played it up.

But as we look back on the careers of Williams and Federer, we can see the gender and racial differences. Williams never emphasized her racial or gender identity. She played tennis with all she had, and Federer played without being conscious of being white and male. The two made tennis memorable, but their life-struggles were distinctly different. Williams had to fight against many odds, not just in terms of the quality of the game, but against racial and social hurdles which were invisible, but they were there. Williams overcame them without rancour. Federer had just to play the game. There were no other hurdles. It is the tale of two champions with different trajectories.