Can Charles put Queen’s legacy behind and craft his own? - GulfToday 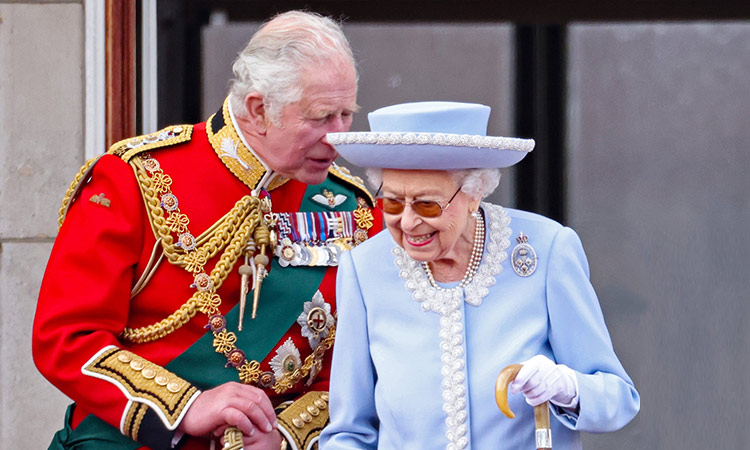 Prince Charles converses with Queen Elizabeth II during the RAF flypast on the balcony of Buckingham Palace during the Trooping the Colour parade in London. File/Tribune News Service

It’s quicker to list the similarities than the differences in character and personality between Queen Elizabeth II and her successor, King Charles III, but despite the basic singularity of their shared destinies, it is not such a long list:

Their mutual — and seemingly — perpetual duty to the royal role.

Their shared inclination and instinct for the traditional. Charles’ first wife, Diana, chafed at him for dressing and acting much older than his years and tried to get him to lighten up — at least shed the fuddy-duddy lace-up shoes and put on a pair of loafers, for heaven’s sake.

Their life’s work — the throne.

But from the cradle to the moment of wearing St. Edward’s Crown in Westminster Abbey, their lives and temperaments diverged.

Elizabeth, born in 1926, grew up as a princess, but was a long shot for the throne — she was the child of a second son. When she was 9 years old, her grandfather, King George V, told a friend that “I pray to God” that his feckless eldest son and heir — the future, brief Edward VIII — would never marry, and that “nothing will come between Bertie” — his second son — “and Lilibet and the throne.”

It didn’t happen quite as George V had hoped. His first son did get married, but before he did, he abdicated the throne within a year, thereby clearing the path for his brother, George VI (“Bertie”), to succeed him and his elder child (“Lilibet”) to follow.

Elizabeth’s teenage years coincided with World War II, most of which she spent safely tucked away at Windsor Castle, living then and during the years of postwar privation on rations and made-over clothes, supplemented of course by the royal farms and royal wardrobes. Charles grew up in an era of peace and plenty, in a luxury financed by his hefty income as the Duke of Cornwall. His mother, like many wartime children, was inclined to small economies like switching off lights, and deplored her eldest son’s extravagances. Elizabeth’s cousin, Margaret Rhodes, told a writer that the queen objected to the scale of his staff and personal comforts. The queen’s public life was planned for her months ahead; Charles’ was as well, but with enough flex to let him craft his public persona beyond that of a place-holding prince.

The queen was a devout, pray-on-her-knees Christian who took seriously her role as head of the Church of England and “Defender of the Faith,” a title the pope gave to Henry VIII before they broke up. Charles has been a spiritual explorer who once said he wanted to be a defender of faith, of all faiths.

She inherited her job at 25; he finally became king at 73, an age at which most people have already retired.

Here’s a story that’s probably apocryphal but possessed of deeper truth: Queen Victoria’s longtime in-the-wings son and heir, Edward, once told a cleric, the Dean of Windsor, “I don’t mind praying to the Eternal Father but I must be the only man in the country afflicted with an eternal mother.”

The new king thinks of himself as having an intellectual’s taste for serious, introspective, self-searching reading and for serious pursuits — philosophy and poetry — which bored his first wife and did not engage his mother, or his brash, confident father, for that matter. Elizabeth’s remedies for depression or bad times were work, fresh air and horseflesh. Charles the prince lived many incarnations: the serious university student, the royal chick magnet, the “action man” navy officer and polo player, the scholar of mysticism, the creator of philanthropies for young people, the amateur critic of modern architecture whose critiques brought mockery down on his head.

His passion extended to gardening. Even in a nation of devoted weekend gardeners, the news that Charles talked to his plants was another eye-roller. Yet (rather like California’s far-sighted Gov. Jerry Brown) some of Charles’ pursuits and interests — a greener lifestyle, for example — have turned out to be mainstream. However long his reign, these modern concerns will probably become its hallmark and mission.

Elizabeth, in part thanks to a respect even the tabloids accorded her, was able to keep most private family matters private. What went on in her marriage sometimes sped private mills of rumor but was not put on public display. Charles, on the other hand, had the misfortune to come of age and marry just as the press realized the royals were a flock of golden geese to be plucked.

As the Waleses’ lamentable marriage came undone, the world could see it for themselves. To tweak Diana’s phrase, there were four in this marriage: Diana, Charles, Camilla and the press. The incident that brought Prince Charles closest to utter despair was his secretly wiretapped private conversation with Camilla about wishing to become a Tampax to stay closer to her. The actual audio, like his wife’s wiretapped conversation with an old flame, could be listened to for a fee.

Charles’ mother was naturally reserved, and the public seemed to accept her stilted conversations as part of her personality. Charles admired wit and humor and tried to transcend his own shyness with a characteristically British deflection, such as when he interjected an awkward “whatever ‘in love’ means” in a TV interview with his new fiancee. Compared with his bombastic, confident father, Charles’ earnestness was sometimes criticized as that thing the British can’t stand: “whingeing,” complaining. In trying to tell his own story as his own man, Charles — to use a modern word — too often “overshared.”

Nonetheless, the “Diana Effect” made both the queen and Charles try harder to be warmer and more natural. His instincts were right when he read the public reaction to Diana’s death much better than the queen did, and defied her to insist on public mourning rituals, and Charles’ marriage to his second wife and first love, Camilla, seems to have given him a new confidence.

The subtext of British history is the friction between monarch and heir. Sitting right there at the family table is the living reminder of the sovereign’s mortality. George V was constantly at odds with the son and heir who briefly succeeded him and then abdicated.

The 18th century Prince of Wales, Frederick — father of George III, the king Americans booted out — was despised by both his father, George II, and his mother, who called him “the greatest ass, the greatest liar, the greatest canaille and the greatest beast in the world, and we heartily wish he was out of it.” Call it a mother’s juju: Frederick died young-ish, from complications of being hit in the head by a tennis or cricket ball.

Charles has to bear two burdens not of his making. His ears make him a natural target for caricaturists, while his mother’s features were more elusively bland. And his name is not the most felicitous in British history: The first King Charles, grandson of Mary Queen of Scots, was also beheaded. His belief in the divine right of himself generated a civil war. His son, Charles II, was such a libertine that although he had no legitimate children, he fathered enough wrong-side-of-the-blanket sons to populate the British aristocracy. Evidently, Charles’ parents just liked the name. (Now all the royal cyphers — the monarch’s initial and number, so ” C III R ” for Charles III Rex — will go up on all the royal properties, on post offices, on all the decrees and laws and regulations issued and done in his name.)

Unlike other Windsor men, Charles does not smoke. He exercises, eats moderately and practices temperate habits that may give him a longer reign than people expect. Like all the Windsor men, he needs a strong, focused, dedicated, disciplined woman he loves at his back. Unfortunately, that was not the first woman he married.

The 20th century had four kings. Two were wartime kings, one abdicated within a year, and the first of the four, Edward VII, pulled off diplomatic coups that stood Britain in good stead in World War I. Charles’ team has already been trying to diminish the catastrophic Diana era and its ugly ripples. Now it’s about crafting a legacy that, as king and head of the House of Windsor, he will have to build. 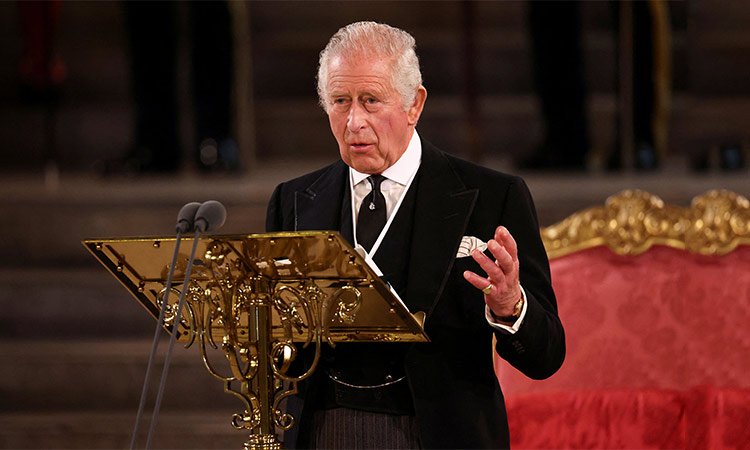 It will take quite a bit to get used to the change for the people in Britain, Scotland, Wales, Northern Ireland and Cornwall of living under Charles III, the new monarch who succeeded Elizabeth II after she passed away on September 8. For 70 years it was “Her Majesty the Queen”. They now must get used to “His Majesty the King”. 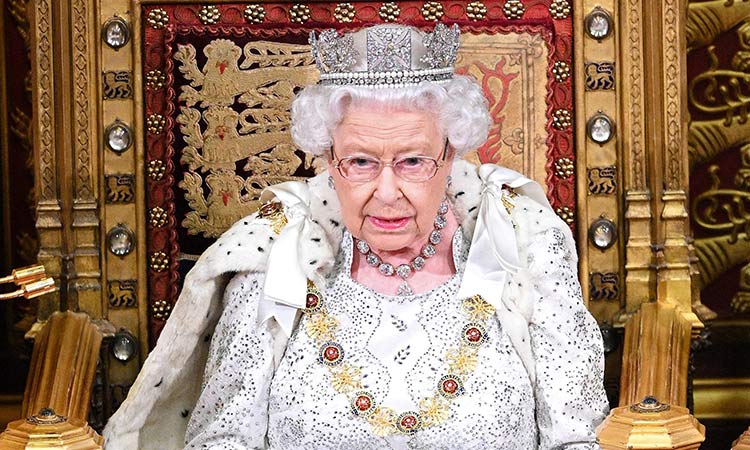