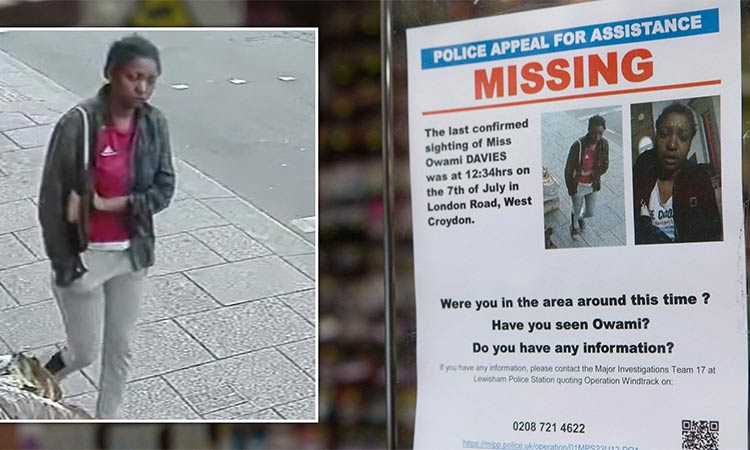 A missing notice gives out information about Owami Davies.

By contrast, news of the ongoing disappearance of Owami Davies, a Black woman from Essex, has paled in comparison. The 24-year-old student nurse hasn’t been seen for a month now, and overall news coverage has lacked consistency.

Mass media pays more attention when white people, specifically women, go missing, than when Black women do. This is not a new phenomenon and doesn’t just apply to the UK — it’s also evident in the US, Canada, New Zealand and just about every other white-majority country you can think of.

The disparity in how Black missing persons cases are handled by the media, and even the police at times, has been evidenced across numerous cases in recent months. The mother of Black student Joy Morgan, who went missing in 2019 and was later found murdered, told the BBC her case didn’t garner widespread attention “because my daughter was Black and because I was Black, I was not newsworthy”.

From the disappearances of Sabina Nessa and Blessing Olusegun to of sisters Bibaa Henry and Nicole Smallman before their bodies were discovered in a park, there’s a pattern in coverage or lack thereof. Nicole and Bibaa’s mum, Mina Smallman, criticised the lack of media coverage about her daughters’ disappearance during a vigil in their memory last August. Calling for racism in the press to be tackled, she said: “It wasn’t because I didn’t do interviews, it was because it didn’t get the airtime. I’m calling out all the editors and producers and the people who decide what’s put in print.

“I’ve met great journalists but you speak for 20 minutes and you get one minute on two dead Black girls. You spend 40 minutes talking on a Zoom call and get a paragraph in the newspaper. I’m calling it out for what it is, you decide what comes on the TV.”

In the case of Owami’s disappearance, the lack of media coverage is certainly concerning, despite the five arrests which have been made in connection to the incident. Ngozi Fulani, the chief executive of Sistah Space, a domestic and sexual abuse charity that supports Black women, said: “I’ve seen so many Black mothers have that double blow of a daughter or daughters missing or deceased and many people don’t care because those women are Black. We’ve ‘heard’ the deafening silence from mainstream media.”

Black people are almost five times more likely to go missing in England but are less likely to get media attention or engagement on social media, according to a recent study by the charity Missing People.

For the avoidance of doubt, a pervasive disregard for Black lives is the underlying reason for these dangerously inadequate responses to Black people going missing. Some people have further pointed to what is known as “missing white woman syndrome” — an affliction in the West which sees institutions place greater focus on the plight of supposedly more attractive Caucasian females over other groups. That’s a factor too. The phrase is thought have been originally coined by Gwen Ifill, a Black American news anchor who previously addressed the topic at a conference in 2004. Like I said — this ain’t a new problem.

What’s striking, too, is that when the few Black and Asian journalists working in the UK media industry point out this problem, they’re either ignored or penalised at work for doing so. Recognising these uncomfortable truths is not a matter of mere sensitivity — it is a matter of life and death. Meanwhile, I’ve had conversations with people who up until yesterday, had no idea who Owami Davies is, while the media is supposed to share information that’s in the public interest.

As long as predominantly white, privileged people run the newsrooms determining what is and isn’t news, while diversity remains woefully poor in these spaces, then you’re always going find skewed coverage of realities faced by racialised groups. Who can tell how many missing people could have been saved, and may yet be rescued, if this wasn’t the current state of affairs.