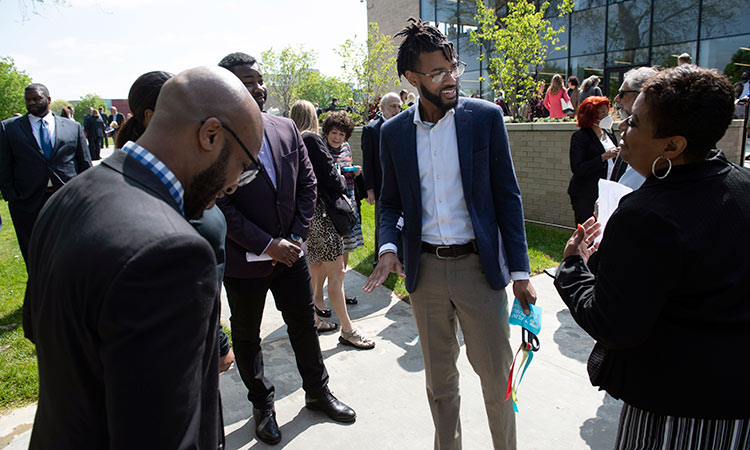 Isaiah Oliver carefully parks his car in the crumbling parking lot of North Flint’s Greater Holy Temple Church. The lot at the church was meant for parishioners coming to worship, not 18-wheelers carrying pallets of bottled water.

But as the city grapples with its water crisis, the church has been one of the main distribution hubs for donated water, food, clothing, and other essential items. That disaster exposed thousands to dangerously high levels of lead in 2014 when an emergency manager switched the city’s water source to save money. Officials failed to treat the water, a step that would have prevented pipe corrosion.

“The water crisis opened up our eyes to the needs in the city,” says Sandra Jones, who directs the RL Jones Community Outreach Center housed at the church.

With no easy access to a grocery store or social services, the center has met the evolving needs of residents — like providing COVID-19 vaccines through the pandemic.

On a visit this spring, “Mother Jones” as she’s known to many, embraced Oliver before they tour the center.

As CEO of the Community Foundation of Greater Flint, Oliver is well known throughout the city. He grew up here and took the helm of the foundation in 2017 after working there for nearly three years.

“If it were not for the community foundation, we wouldn’t exist,” Jones says. The foundation has supported the outreach center with more than $430,000 in grant funding over the years. Other foundations provide support as well.

Jones says Oliver and his colleagues understand the community’s plight because many have lived it. “They’ve been boots on the ground. They’ve got their ears to the ground,” she says. “If my water is not good, theirs isn’t, either. If I have housing around me that needs to be fixed, they do, too.”

Now as families recover from the water crisis and the pandemic, the foundation and Oliver are building on their reserve of trust and their proximity to the community. As the foundation’s first Flint native and first Black leader since it was founded in 1988, Oliver works to build bridges between marginalised people and wealthy donors.

“It’s so clear that Isaiah feels a real sense of accountability to his community,” says Susan Taylor Batten, president of ABFE: a Philanthropic Partnership for Black Communities, where Oliver is a board member.

Even more than the erosion of the city’s water pipes, “the erosion of trust was the biggest issue that came out of the water crisis,” Oliver said in an interview in his office. Rebuilding trust in institutions is a continuing process. Despite reassurances that the city’s water is safe, many residents still don’t trust the tap and drink bottled water instead.

The crisis also presented opportunities, Oliver says, to help others learn the value of community foundations and for his leadership to shine through.

“The exposure that we’ve had has given me a platform to talk about what we can do to support people in marginalised communities,” he says.

To show some of the work the foundation has supported, Oliver gave a reporter a tour of the city. As he drove, he shared stories of Flint.

The tour cruises through Civic Park, the first General Motors planned neighbourhood. Here homes were built for workers and their families. As jobs and workers left, and the tax base eroded, the neighborhood became a shell of itself. Residents are working to revitalise it.

On the south side, near the city’s cultural district with its museums and concert halls, are the grand mansions built for Flint’s elites when the city was a thriving center for GM’s manufacturing. Upper-income residents as well as some elected officials live in the neighbourhood today.

As the leader of the community foundation, Oliver, 41, tries to be the link between Flint’s pockets of wealth and disadvantage.

“I’m a bridge between those folks who have resources and those who need resources in order to get things done,” he says.

The bonds Oliver has built were evident as a who’s who of Flint gathered to dedicate a rebuilt public library in the cultural district. Funded by foundation grants, wealthy donors, and government dollars, the $20 million building is symbolic of the central role philanthropies play in support of Flint’s civic life.

Oliver could hardly walk a few feet without stopping for a hug, handshake, or fist bump with someone he knew. The same thing happened during the short walk to the farmers’ market as he greeted people by name as they worked at food stands or grabbed a bite of lunch.

For most of Oliver’s youth, he lived with his mother, who supported them with a part-time job and government benefits.

“I lived poor as hell, and I didn’t exactly know it,” Oliver says. “My mom protected me from that reality and allowed me to dream.”

After he graduated from high school, he attended Central Michigan University in Mount Pleasant. He graduated in 2003. Returning to majority Black Flint after living in the predominantly white college town helped him see some of the divisions there that hadn’t been as clear before.

In 2004, he was hired as an administrator at Mott Community College, where he focused on building partnerships with local organizations. In 2011, he ran for and won a seat on the board of Flint Community Schools. He served for six years, including one as president.

At the college, he became involved in a plan to improve literacy. Many students entering the college weren’t academically prepared for their courses. Representatives from schools, businesses, churches, and philanthropies began meeting to discuss how they could serve the area’s most vulnerable students. Oliver was asked to guide the discussions. During one of those meetings, Kathi Horton, then president of the community foundation, saw him in action.

“It was obvious he was a very good listener,” Horton recalls. “He was just masterful in bringing out everyone’s voices and helping the group get comfortable with the fact that there wasn’t an immediate consensus.”

Later Horton encouraged Oliver to apply for a job at the community foundation. In 2014, he joined as vice president. When Horton retired in 2017, Oliver was named CEO. As the community foundation became the recipient of millions of dollars from other foundations supporting water-crisis recovery, it was moving away from a top-down style of grant making.

“We needed to involve community members who before had not been involved in our grant-making decisions,” Horton recalls. Oliver had a reputation as a leader invested in making Flint a better place to live.

Last year, the foundation and its donor-advised fund holders made $9.6 million in grants, ending 2021 with more than $299 million in assets.

Improving literacy remains a grantmaking priority, along with increasing access to healthy food and supporting the well-being of children affected by the water crisis. The foundation has worked to keep racial equity as a focus through all of its work, including with its COVID-19 rapid-response fund and addressing the causes of the pandemic’s heavy toll on Black residents.