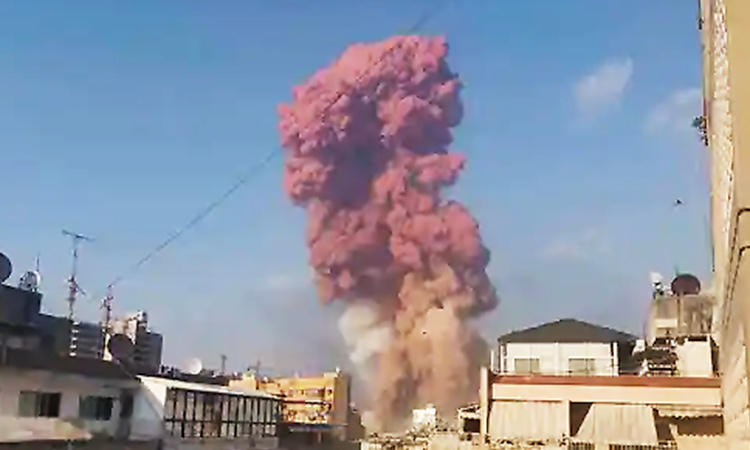 A scene of the Beirut port blast.

It is considered the most intense non-nuclear explosion. The 2,750 tonnes of ammonium nitrate that was stored in the Beirut port and exploded on August 4, 2020, which killed 200 people, injured 7000 and devastated large neighbourhoods near the port in Beirut has caused public outrage and a political crisis. But Lebanon’s wily politicians are not allowing the inquiry to go on. The politicians did not trust Judge Fadi Sawan and he was dismissed in February 2021, and then the politicians did not trust Judge Tarek Bitar. The investigation has been suspended since December 2021. The issue has been taken up by a Swiss organization, Accountability Now, and it has filed a $250 million damages suit on behalf of the victims.

The linkages to the Moldovan ship Rhosus which was destined for Mozambique, but the ammonium nitrate was offloaded at Beirut is owned by Spectrum, a British firm, which in turn is owned by Texas-based TGS, a US-Norwegian geo-physical services firm. So, the Swiss NGO had filed damages suit against the TGS in Texas. That is, the ammonium nitrate was not meant to be offloaded in Beirut, and the mishandling of the whole episode starts here.

Rhosus was impounded in Beirut over debt issues, and the rickety state of the ship and the danger that it could sink made it necessary to offload the ammonium nitrate at Beirut in October 2014. And the stored ammonium nitrate exploded on August 4, 2020. Many troubling questions come up. Why was the ammonium nitrate stored for so many years in Beirut, and why was it allowed by the Lebanese authorities? The families of the victims and the lawyers believe that the trucks issue and seismic analysis was a pretext, and the real motive was to offload the ammonium nitrate at Beirut. What the conspiracy is remains undetected. But there seems to be a nefarious deal between the authorities in Beirut and the ship-owners, which needs to be exposed. Wakim raises the question: “It was already at three times its capacity when it arrived in Beirut …so it doesn’t make sense why this boat was chartered to Lebanon under the cover of seismic data machinery transportation.”

With the loss of so many lives and injuries to thousands, and damage to property worth billions of dollars, this was no ordinary mishap. It is the incident that shook the people of Beirut and their anger against the politicians erupted. But the fractious politics of Lebanon are such that no inquiry into the mishap has been allowed to go forward.

Apart from the suit filed in Texas, there is another filed by the Beirut Bar Association in the United Kingdom’s High Court of Justice against Savaro Ltd., the company suspected of ordering the ammonium nitrate from the Georgian chemicals factory Rustavi Azot. Apparently, Savoro Ltd, is now inactive.

There are other cases that have been filed in France, Germany, and the Netherlands for the death of their diplomats in the Beirut explosion two years ago. As the issue gets entangled in international suits, what remains unanswered is the death and destruction that this chemical explosion unleashed.