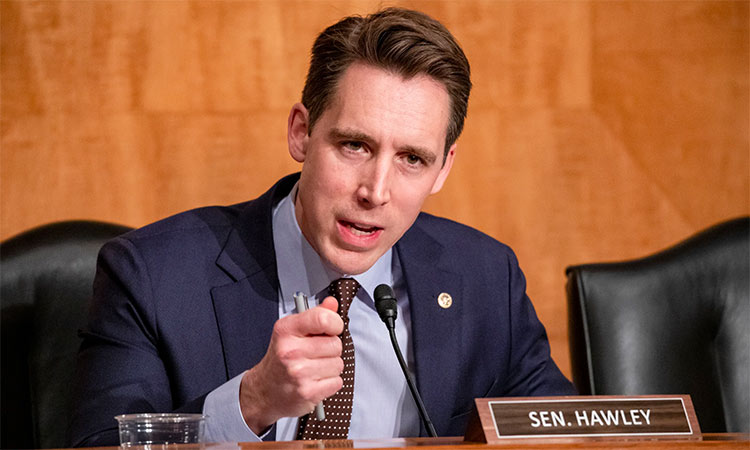 Friends, May 16, 2023 cannot come fast enough. Why? Because that is the release date of Missouri Senator Josh Hawley’s much anticipated book “Manhood, The Masculine Virtues America Needs,” courtesy of the conservative powerhouse Regnery Publishing. Regnery has already blessed us with the even-handed wisdom of Ann Coulter (”!Adios America!”), Sebastian Gorka (“Why We Fight”) and Mollie Hemingway (“Rigged: How the Media, Big Tech, and the Democrats Seized Our Elections”).

But, my goodness, do we men need this instructive manual from one of the most manly guys in the United States. I mean did you not see his raised fist of support just before the January 6th insurrection riot attempted murderous coup peaceful assembly of brave male patriots? I admit that just the idea of me doing something so macho makes me tremble with fear. But not our bro Senator Hawley.

According to the publicity team helping to promote “Manhood”: “The American Founders believed that a republic depends on certain masculine virtues. Senator Josh Hawley thinks they were right. In a bold new book that will no doubt become a bestseller, he calls on American men to stand up and embrace their God-given responsibility as husbands, fathers, and citizens.”

Thus the raised fist followed by the courageous vote in the Senate, along with another alpha male Senator Ted Cruz, against certifying the free and fair rigged election of President Biden.

Alas, I wish I had the kind of seminal courage that Hawley has. He recently was the lone vote against allowing those socialist, taxpayer-gouging countries of Finland and Sweden to join NATO. Thank God for his sanity. But, sadly, I am a limp balloon, a sad-sack, blue-state resident, a once-divorced, gender-confused weakling who has been neutered by bellowing feminists that have forgotten their place as apron-wearing, pie-baking fertility receptacles of virtue. Ah, the good ol’ days.

From Regnery: “No republic has ever survived without men of character to defend what is just and true. Starting with the wisdom of the ancients, from the Greek and Roman philosophers drawing on the lessons of American history, Hawley identifies the defining strengths of men, including responsibility, bravery, fidelity, and leadership.” Wow, Josh Hawley mentioned in the same breath as the Greeks and the Romans.

Unlike me — a kettle-chip-eating, double-wide-sitting couch potato who still foolishly lets his wife drive (occasionally, but still) and who will cook dinner a few times a week — Senator Hawley stays in tip-top shape through his disciplined regimen of diet and exercise. We all saw the video of the fleet-of-foot Senator dashing through the Capitol on January 6 during the peaceful demonstration of bear-spray-touting men that actually care about the future of our politically-correct, off-course, communist-leaning nation.  The lamestream media tried to sell us on the lie that Josh was running from trouble. But, in fact, what he was actually doing that wonderful afternoon was filling the Heroism Gap of such wimpy woke “men” as Senators Schumer and Durbin, and that weaselly little poor excuse for a Y chromosome, Vice President Mike Pence. Pence was last seen surrounded by his armed posse fleeing to a secure bunker. Coward! I guess Mike just didn’t care about democracy as much as Josh did. You see, our guy Josh runs toward the action, not away from it. It’s pretty obvious to me who I want in my foxhole when the libs take over. Hint: It’s not going to be some dude who refers to his wife as “mother.”

In a speech last year to the National Conservatism Conference that rivaled Lincoln’s Gettysburg address, Senator Hawley offered his astute perceptions about how men have been beaten down by the radical left”.

“The left is telling America and its men: You’re evil. You’re terrible. You must apologize and submit to your government masters to be reformed,” Hawley continued.