Trump’s Jan.6 plot is more shocking than you think - GulfToday 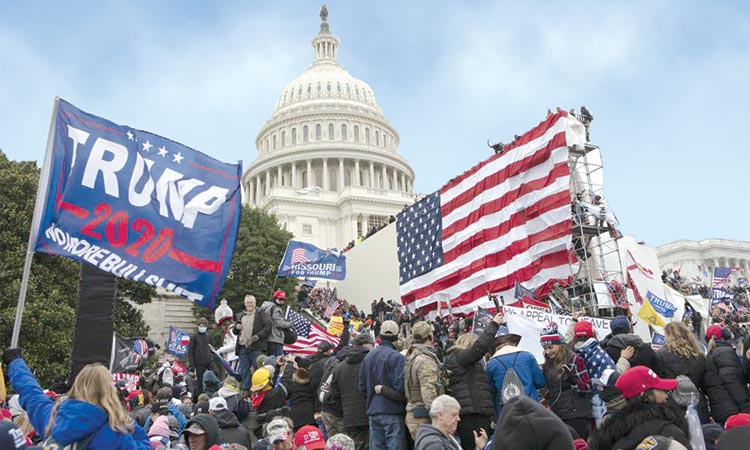 Violent insurrectionists loyal to Donald Trump stand outside the US Capitol in Washington on Jan. 6, 2021. File/Associated Press

On the morning of January 6, 2021, then-President Donald Trump was in a fit of rage. While backstage ahead of his “Save America” rally, he vented frustrations about his crowd size. He wanted the Secret Service to remove the magnetometers in spite of the fact his supporters were armed: “I don’t care that they have weapons. They’re not here to hurt me. Take the mags away. Let my people in. They can march to the Capitol from here. Let the people in. Take the mags away.”

Just when you think Donald Trump’s plot to overturn the 2020 election can’t get any more shocking, it does. It’s now clear why the January 6 Committee felt compelled to convene this surprise hearing. To come back from recess with a new hearing and only 24 hours’ notice indicated we were in for something big. But even with all the hype, I’m not sure anyone was prepared for what we heard today. Cassidy Hutchinson, the former Special Assistant to Mark Meadows, just directly implicated Trump in the violence at the Capitol on January 6 and revealed some violence Trump personally unleashed on a Secret Service agent.

In explosive testimony, Cassidy Hutchinson revealed that Trump was briefed on the intelligence reports about potential violence on January 6 and planned his rally anyway.

Trump knew that his supporters were armed with guns and body armor and directed them to the Capitol anyway. Trump violently assaulted his own Secret Service agent in an attempt to go to the Capitol himself.

Trump said Mike Pence deserved to be hanged. Trump knew that the Capitol was under siege and still sent a tweet attacking Pence. Trump was reluctant to do anything to stop the violence. And after it was all over, Rudy Giuliani and Mark Meadows sought pardons.

After already doing four closed-door depositions over 20+ hours with the January 6 Committee, Cassidy Hutchinson stepped forward publicly today to give Americans an inside look at what happened in the White House before and during the January 6 insurrection.

January 6 Committee Vice-Chairwoman Liz Cheney (R-WY) led most of the questioning. The testimony began discussing the evening of January 2, 2021. Hutchinson testified that after Rudy Giuliani met with Mark Meadows that evening, he told her that “we’re going to the Capitol” on January 6 and that Trump will be there and it will be great. Rudy said that Meadows knew about it.

When Hutchinson asked Meadows about Giuliani’s comments, Meadows said that “things might get real, real bad on January 6.” Hutchinson said that this was the first time she felt scared about what could happen that day. Top Secret Service Official Tony Ornato briefed Trump about intel reports of potential violence on January 6. Hutchinson said that as January 6 approached, she remembers hearing about the Proud Boys and Oath Keepers when Rudy Giuliani was around, but she didn’t specify further what the nature of those conversations were.

Hutchinson said that Trump asked Meadows to call Roger Stone and Michael Flynn on January 5. Meadows called both of them. Hutchinson said Meadows then wanted to attend the Willard Hotel “War Room.” She advised against it. He didn’t go, but “dialed in.” Still unclear what was discussed.

The focus of the hearing then lasered in on January 6. Liz Cheney played police radio transmissions revealing that there were rally attendees armed with AR-15s on the day of the Capitol attack. Cassidy Hutchinson said she and Tony Ornato told Mark Meadows that rallygoers were armed with knives, pistols, rifles, body armor, and flag poles that were turned into spears. She remembers Meadows did not look up from his phone.

Hutchinson says that Ornato also briefed Trump about the kind of weapons that rallygoers had. So this means Trump was well aware of how heavily armed his supporters were ahead of his Save America rally. That didn’t change the fact Trump demanded that his armed supporters be allowed into the rally and then allowed to go to the Capitol.

Hutchinson then revealed that Trump lawyer Eric Herschmann said it would be “foolish” to include the incendiary language about how the rallygoers had to “fight” for Trump in the speech. Trump didn’t listen. In fact, when Hutchinson told Mark Meadows that there was early violence at the Capitol during Trump’s speech, he “almost had a lack of reaction,” then said: “How much longer does the President have left in this speech?’

Hutchinson said that there were discussions about Trump having another speech at the Capitol or for him to enter the House chamber. White House Counsel Pat Cipollone had warned against Trump going to the Capitol with his rallygoers. Cipollone said they would look like they were obstructing justice or defrauding the electoral count and was also worried that they would look like they were inciting a riot.

This is when the hearing described presidential conduct I never thought I’d witness.

“I’m the president. Take me to up the Capitol now!” Trump demanded.  When Engel said no, Trump reached up to take control of the steering wheel. Engel grabbed his arm and told him they had to get back to the White House. Trump then lunged at Engel’s throat with his free hand. You read that right. The former President straight up attacked the head of his Secret Service detail because he refused to take him to the Capitol on January 6.

Hutchinson testified that the White House Counsel’s office, Eric Herschmann, and Ivanka Trump tried to get Trump to take more action to stop the violence. She claims that Mark Meadows was initially among a group of people who chose to “deflect and blame” instead of taking action. Mark Meadows’ casual attitude indicates he was not surprised by any of the events of January 6. This ties into Rudy Giuliani telling Cassidy Hutchinson on January 2 that Meadows knew all about what would happen on January 6.

Trump was reportedly “blindsided” by Cassidy Hutchinson choosing to come forward publicly and the testimony has left his former aides “speechless.” Rightfully so. What words can properly depict the gravity of this situation.

Trump said his armed supporters were not there to hurt him. Then who were they there to hurt? The evidence today indicated that the violence at the Capitol on January 6 wasn’t an accidental byproduct of Trump’s rally.

It was the point. Trump was clearly seeking to engineer a violent coup. These hearings have demonstrated just how unhinged and unique a threat to democracy Donald Trump is. Now, we wait and see if he’ll face accountability for it.