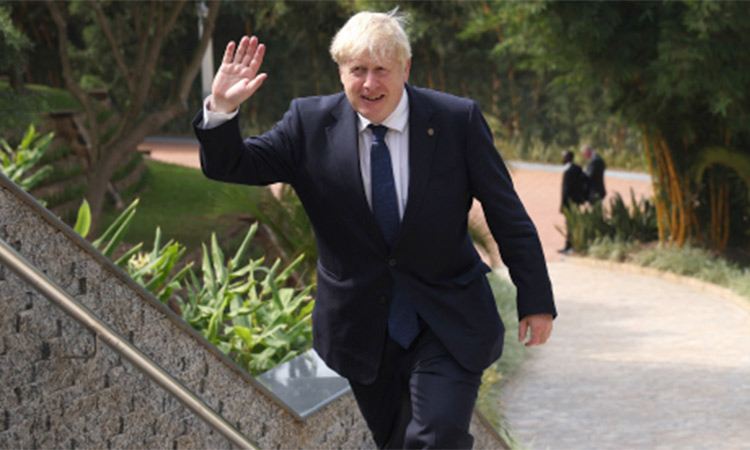 British Prime Minister Boris Johnson at the Leaders’ Retreat on the sidelines of the Commonwealth Heads of Government Meeting at Intare Conference Arena in Kigali, Rwanda on June 25, 2022.

Last weekend 56 Commonwealth heads of government and state met at summit level in Kigali, the Rwandan capital, for their first gathering in four years as Britain, the prime mover, struggled against court bans on the deportation of 130 “illegal” asylum seekers to Rwanda despite its legacy of genocide as well as ongoing repression, a dismal human rights record, and poverty.

While many Commonwealth members are not democratic and do not share common values and purposes as required for membership, Prince Charles attended on behalf of his mother Queen Elizabeth who is the formal head of the organisation. Ahead of this meeting, Prince Charles called the deportation plan “appalling” but went ahead with his visit to Rwanda which has also negotiated a deportation deal with Denmark. British celebrities urged Commonwealth chiefs to reject Britain’s plan, arguing it views Africa as a “dumping ground.”

The Commonwealth has expanded since it was founded in 1931 to maintain relations between Britain as its colonies after they had achieved independence. Although ruled during its Western colonial period by Germany and Belgium, Rwanda joined the Commonwealth in 2009, becoming the second Francophone country after Mozambique to gain accession. Others have followed.

Britain is not the first country to try to transport asylum applicants to Rwanda. Israel was and its experiment was a unhappy failure for all concerned. Between 2013 and 2018, Israel gave 4,000 Eritreans and Sudanese a choice of returning to their countries of origin, detention and a one-way ticket to Rwanda with $3,500 to spend while settling there. Instead of being granted asylum status and residence, most were sent to Uganda where they joined smuggling routes across Africa to reach Europe. Some made it while others drowned in the Mediterranean or were murdered in Libya. Instead of deterring migrants, thousands flocked to Rwanda and Uganda where they began their perilous journeys with people traffickers promising European destinations.

Amnesty International’s Steve Symonds told the BBC, “The risks of expelling people seeking asylum .. to countries they do not know and may have no connections with are especially acute.”

While Eritreans and Sudanese count as Africans, they are not Rwandans and do not share the same culture at the citizens of the country where they are supposed to make new lives. The refugees Britain wants to deport include Iraqis, Syrians, and Afghans who will never be able to feel at home in Rwanda as they could in Britain where there are thousands of citizens and residents from their home countries. Fifty per cent of those crossing to Britain have relatives there.

An Iraqi refugee who settled in Germany informed Gulf Today that Syrians who arrived in their tens of thousands in 2014-15 have not only integrated well but also help newcomers from Syria to learn German and organise their lives. My Palestinian friends from Syria who migrated to Germany in 2014 have been naturalised and have a state which they can call home for the first time in their lives.

Britain claims that its five-year Rwanda asylum programe is very different from the Israeli experiment. This aims to send refugees who arrive illegally in Britain after Jan. 1, 2022, to Rwanda for long-term settlement. Britain is set to pay Rwanda £120 ($148) million to accept the refugees and Kigali would receive further funds if deportees continue to arrive. Britain claims this programme will deter refugees from risking their lives by setting sail in small across the English Channel from France or Belgium. However, so far, this has not discouraged refugees. Asylum seekers who have been in Britain for several years have also been chosen for deportation to Rwanda.

During 2021, 28,526 people are said to have crossed in small boats. This is a dramatic increase over 8,404 in 2020.  Seventy-five per cent were men between the ages of 18-39 and 12 per cent were minors who were also 75 per cent male. The largest number were Iranians, followed by Iraqis, Eritreans and Syrians.  The scheme is to cost £1.5 billion ($1.84) a year with nearly £5 ($6) million a day spent on hotels — although this sum is reduced by accommodation costs to house in Britain thousands of Afghans who fled their country when the US and Britain withdrew from that country a year ago. Modern flats with facilties for children have been prepared in Rwanda for arrivals. Rwanda says it can deal with 1,000 asylum seekers in the trial period but argues it can absorb many more once the programme is implemented fully. However, the UN refugee agency does not believe Rwanda has the staff — lawyers, social workers, and interpreters, to deal with migrants. Britain claims it will closely supervise the scheme but since the UK has detained asylum seekers for years in poor conditions, little respect for their rights, and without processing their applications speedily, they do not trust the government.

Consequently, prospective deportees have lodged appeals against deportation with British courts and European Court of Human Rights, which is connected with the European Commission of which Britain is a member although it has withdrawn from the European Union. The European Court halted the first flight while it was on an airport tarmac ready to depart a few days before the Commonwealth summit convened.

Like other African countries, Rwanda already has thousands of refugees from African countries, notably Brundi and the Democratic Republic of Congo. Some are employed as labourers and household servants, but the majority are unemployed and subsist on a dole of £35 a month.

As Britain is 18th on the European list of per capital asylum seekers (while little Cyprus is first), why is London pursuing deportation to Rwanda. The answer is one word: “Brexit.” Having restricted the residency and employment of citizens of the European Union by ending British membership, the Conservative government insists that the country must exercise full control over its borders. The Rwanda scheme has the backing of a plurality Conservatives who are prepared to receive Hong Kong Chinese, particularly if wealthy, and Ukrainians fleeing Russia’s war. Afghans and Iraqis should have a claim on receiving asylum in Britain which, alongside the US, waged war on both their countries and transformed them into failed states.