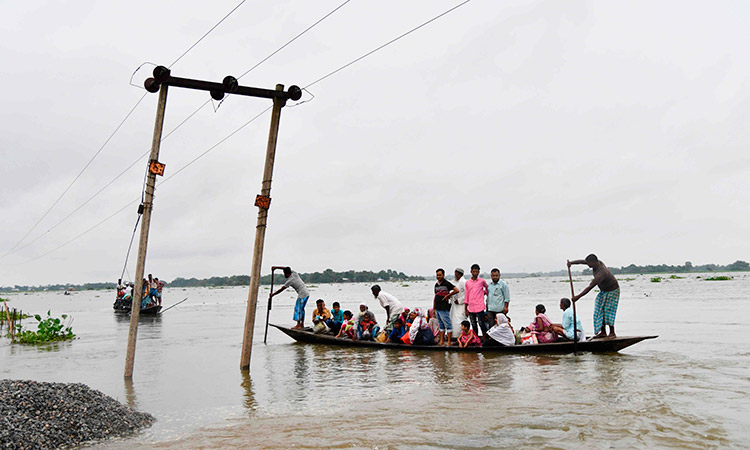 The northeastern state of Assam in India has remained one of the worst-hit regions across the country during the late pre-monsoon as well as opening monsoon months. The Weather Channel India (WC India) reports that since the beginning of June, Assam has recorded 556.6 mm precipitation — a whopping 89% ‘large excess’ as compared to its long-term average for the period between June 1 to 21 (294 mm). The India Meteorological Department (IMD) has predicted more heavy rains across Assam from in the next weeks.

Owing to these persistent downpours and the resultant floods and landslides, the WC India report states that statewide death toll as of June 21 has risen to 88! Over 5000 villages remain affected due to rivers flowing above the danger levels. The worst affected is the town of Kampur, which was completely submerged under water. The Indian army and paramilitary troops have been called in to help with rescue and relief operations, and many people have been evacuated. While the monsoon activity across India’s southern and central states has remained on and off since the start of June, the intense rains across Northeast India have prevailed throughout. Now, more heavy showers have been forecast over the region for the next five days. As per the IMD, moist southerly and southwesterly winds blowing in from the Bay of Bengal are set to dump widespread precipitation over Northeast India and the adjoining subdivision of Sub-Himalayan West Bengal and Sikkim for the next week and possibly beyond.

Record-breaking precipitation has resulted in the city of Bengaluru practically drowning in rainwater this past week. It has been the wettest June in a decade for the city that is located in the southern state of Karnataka. The IMD has indicated that June 2022 has already become Bengaluru’s wettest June in ten years! The WC says that since June 1 this year, Bengaluru has registered 198.5 mm rainfall, surpassing a 10-year-old record and making this month the wettest June in a decade. The closest second was when the city witnessed 191.3 mm precipitation in June 2016.

Just in May, the country was reeling under searing heat waves. The WC India says that the summer of 2022 saw an unprecedented rise in mercury levels, registering record highs in daytime temperatures across India and that one of the causes for this human-induced climate change. It quotes a recent study by the UK’s Met Office where it assessed that the spell of record-breaking temperatures in India may occur every three years now, instead of the previous time frame of 312 years. Its findings suggested that “human influence has increased the likelihood of extreme April-May temperature anomalies by a factor of about 100. By the end of the century, the likelihood is estimated to increase by a factor of 275, relative to the natural climate”.

The WC India report points out that while this is going to impact our lives in every conceivable aspect, one lesser-thought-about angle is the effect of this unparalleled heat on India’s growth and gross domestic product (GDP). Until 2017, approximately 50% of India’s GDP relied on work that involved exposure to heat, according to a 2020 McKinsey Global Institute paper quoted by the WC India report. It states that estimates indicate that by 2030, nearly 40% of India’s economy will still depend on heat-exposed work — putting India’s economy at the mercy of climate change shocks. The McKinsey study also stated that “an increase in lost labour hours due to rising heat and humidity could put approximately 2.5-4.5% of GDP at risk by 2030 – equivalent to roughly $150-250 billion”.

The WC India report also highlights a 2019 study by the International Labour Organization (ILO) titled ‘Working on a warmer planet – The impact of heat stress on labour productivity and decent work’. The ILO study said that worldwide, heat stress is expected to reduce total working hours by 2.2% (equivalent to 80 million full-time jobs) and global GDP by US $2,400 billion in 2030. India, the South Asian country most affected by heat waves, having already lost 4.3% of working hours (the equivalent of 19 million full-time jobs) in 1995, is projected to lose 5.8% of working hours (the equivalent of 43 million full-time jobs) in 2030 due to heat stress. The ILO report also noted that India’s agricultural and construction sectors would be affected most, with millions of migrant workers being impacted by the heat.