Should we raise unemployment to fight inflation? - GulfToday 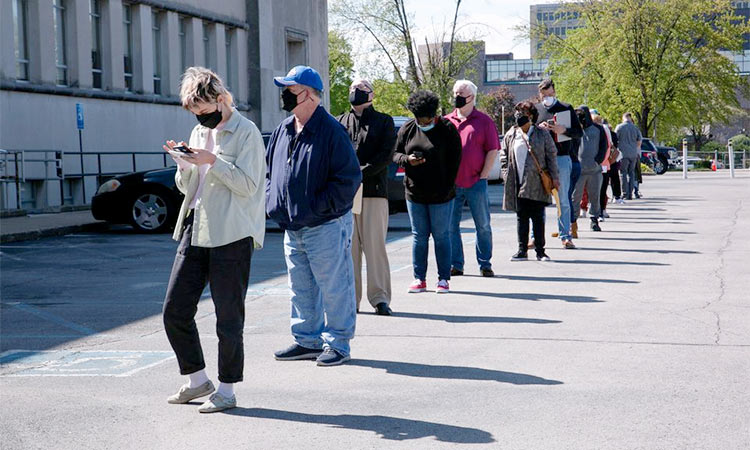 People line up outside a newly reopened career centre for in-person appointments in Louisville, US. File/Reuters

If economic history teaches us anything, it’s that when times get tough, working men and women get targets painted on their back. Current events give us a perfect illustration. The US is at or close to full employment with an unemployment rate of a historically low 3.6%, but inflation has been rising. So the argument that the remedy to higher prices is higher joblessness is being heard more and more often.

The most distilled iteration of this argument comes from former Treasury Secretary Lawrence Summers, who put it this way in a June 20 speech in London, as reported by Bloomberg:

Summers called these “numbers that are remarkably discouraging relative to the Fed Reserve view,” which is that tools in the Fed’s arsenal such as an increase in short-term interest rates might be enough to stage a “soft landing” for the economy — a reduction in inflation without provoking a recession.

But in June 2013, the last pre-pandemic month when the unemployment rate was 7.5%, some 11.8 million Americans were unemployed, 5.8 million more than last month, according to the Bureau of Labor Statistics. About 144 million were working, compared with 158.4 million last month.

So Summers is talking about 5.8 million to 15 million Americans reduced to joblessness in order to bring down inflation.

Summers’ words have been widely quoted not just because of his position as a former Obama appointee, but because he warned that fiscal policies early in the Biden administration would ignite higher inflation.

He appears to have been prescient then, it’s felt, so perhaps he’s correct now. (Whether Summers was right or wrong or perhaps right for the wrong reasons is a topic of debate in the economist community.)

Yet there are significant flaws in the explicit equating of higher employment with higher inflation.

Summers himself, during an appearance in May at Northwestern University, cautioned against overconfident generalisations about the economy.

Asked, “Do we need to get out of the hot labor market completely in order to bring inflation down?” he replied, “One of the things that I’ve learned over time is it’s best to think in terms of what’s most likely and what seems probable to you. All absolute statements about these things are foolish.”

Those were the “stagflation” years, brought to an end by the bitter medicine of interest rates higher than 20% delivered by then-Fed Chairman Paul Volcker.

It’s true that factors other than employment and wage gains affected prices during all those periods, but that merely underscores the variety of pressures that drive prices higher or lower.

Today’s inflation, as it happens, appears to derive less from excessive demand from consumers, as would be a reflection of full employment and its consequent upward pressure on wages, than from supply-chain blockages such as shortages of raw materials and merchandise. In economists’ jargon, it’s more “cost-push” than “demand-pull” inflation.

Indeed, in an economic analysis published Tuesday, Adam Hale Shapiro of the Federal Reserve Bank of San Francisco demonstrated that supply constraints, including “labor shortages, production constraints, and shipping delays,” as well as the war in Ukraine, account for more than half of the recent run-up in inflation, and higher demand only for about one-third.

Labor economists also question the narrative that higher wages are driving inflation, and consequently that bringing wages down through higher unemployment makes sense as a policy approach. Traditionally, wages grow about 1% a year faster than consumer prices — that’s an artifact of improving standards of living over time.

Indeed, the Bureau of Labor Statistics in its most recent report stated that hourly earnings rose by 5.2% for all employees, and by 6.5% for production and nonsupervisory employees, during the year ended in May. Over the same period, the consumer price index rose by 8.6%, with the largest contribution coming from energy costs, including gasoline and fuel oil prices.

“In short, nonwage factors are clearly the main drivers of inflation,” Bivens observed. Taking steps to quell inflation by rolling back employment would cause unnecessary hardship for millions, with little gain to show for it.

Using job losses to manage inflation is arises from what economists know as the Sacrifice Ratio — ostensibly the relationship between unemployment and inflation.

By the reckoning of former Obama economic advisor Jason Furman, in recent decades the ratio has been 6  percentage points — a 6% rise in unemployment over a year tends to bring down inflation by a single percentage point, as would two years of 3% increases, etc., etc.

Summers’ calculation of the relationship was somewhat looser, though every bit as mechanistic as one would expect an economist’s tool to be.

Among other issues, it places the entire burden of reducing inflation on unemployment, even though inflation is a multi-factoral phenomenon. It also treats the relationship between unemployment and inflation as an almost immutable constant.

This approach harks back to pre-Depression policy, when working men and women were regarded as just another economic input and downturns were valued as necessary medicine to preserve the financial wellbeing of the bondholding class. It was the era when the prescription for an economic downturn offered by Treasury Secretary Andrew Mellon, one of the richest men in America, was “liquidate labour, liquidate stocks, liquidate the farmers, liquidate real estate,” as Herbert Hoover described Mellon’s argument in his own memoirs.