Remember the names who asked for pardons - GulfToday 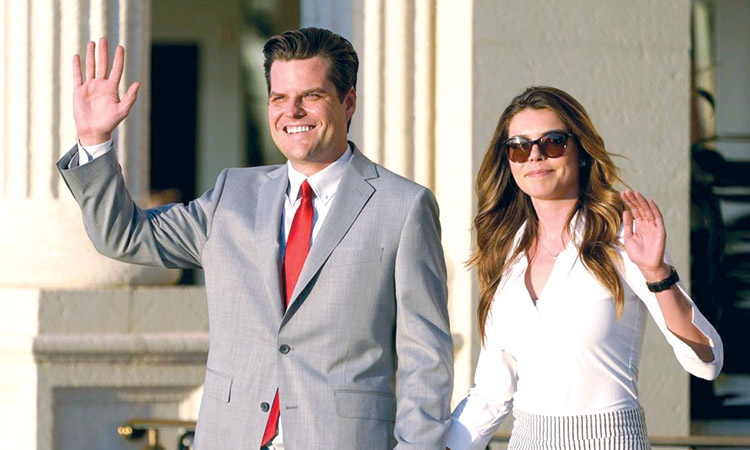 On December 27, 2020, there was a call between then-President Trump, Acting Attorney General Jeffrey Rosen, and Acting Deputy Attorney General Richard Donoghue. Trump’s pressure was relentless. They had to do more to investigate his voter fraud claims, he urged.

Donoghue responded by telling Trump that the Justice Department just can’t snap its fingers and change the results of the election. Trump snapped back, ominously demanding: “Just say that the election was corrupt and leave the rest to me and the Republican congressmen.” That was an exact quote. Donoghue took notes.

Today’s January 6 Committee hearing focused on the former president’s effort to twist the DOJ into his personal coup machine. The committee showed how Trump sought to force the DOJ to aid his multi-level pressure campaign to overturn the 2020 election. And when top officials refused, Trump tried to install someone who would — which culminated in an Oval Office showdown that could have changed the course of history. All this was occurred with the help of Republican lawmakers who later sought pardons.

The in-person witness testimony we heard was from Jeffrey Rosen, Richard Donoghue, and Steven Engel, the former Assistant Attorney General for the Office of Legal Counsel. These witnesses continued the January 6 Committee formula of featuring Trump-appointed Republican officials.

While he wasn’t in attendance, Jeffrey Clark, the man with whom Trump sought to replace Rosen, was the star of the hearing. Just hours before the hearing began, multiple news organizations reported that Clark’s home had been raided by federal agents in relation to their investigation into January 6. After hearing today’s testimony, it’s clear why the DOJ is interested in him.

Between December 23, 2020, and January 3, 2021, Trump either called or met with Rosen “virtually every day.” What Trump wanted to be done was nothing short of madness. In spite of being told by both Rosen and Donoghue in “blunt” terms that his voter fraud claims were “not true,” he persisted. He asked the DOJ if he could seize voting machines and appoint a special counsel (Sidney Powell testified that she was promised the job). Rep. Scott Perry (R-PA) even tried to get the DOJ to probe a conspiracy theory about how Italian satellites stole the US election. Donoghue called it “pure insanity.”

By the time of the call on December 27 where Trump asked the DOJ to just announce the election was corrupt, it was clear that Rosen and Donoghue were not going to do Trump’s bidding. Enter Jeffrey Clark.

Clark was an environmental lawyer at the DOJ who was introduced to Trump by Rep. Perry during a December 22 White House visit (a visit that was not authorized by the department.) On December 26, 2020, Rep. Perry texted Mark Meadows asking that Clark be elevated to AG. Rep. Perry also called Donoghue, lobbying for Clark. Clark then made a big move to further get Trump’s attention. Clark and his deputy Ken Klukowski drafted a five-page letter and emailed it to Donoghue on December 28, 2020. The letter falsely claimed the DOJ had discovered voter fraud and that multiple states needed to suspend their electors and certify an alternative slate of electors, which John Eastman and the Trump Campaign had organized.

Rosen and Donoghue refused to sign the letter. Donoghue told Clark, “What you are doing is nothing less than the United States Justice Department meddling in the outcome of an election.” After this, Clark continued to double down, culminating in a game of thrones in the Oval Office on Sunday, January 3.

Clark sent the DOJ into a frenzy early that Sunday by telling Rosen that had Trump offered him the role of Attorney General. According to White House call logs on January 3, they were already referring to Jeffrey Clark as Acting Attorney General by then.

Rosen moved with ferocity. He called Meadows to set up a meeting in the Oval Office for 6:15pm that same night. He asked then-White House Counsel Pat Cipollone, Steve Engel, and Donoghue to attend. Herschmann also called Rosen to tell him that he was going to attend the meeting. Donoghue called the assistant attorneys general to fill them in. All of them told Donoghue that they would resign if Clark was appointed.

The meeting began. Clark was in the room. Trump started by complaining that Rosen wasn’t “going to do anything to overturn the election” and that Clark would. The conversation lasted two and a half hours. Donoghue and Engel told Trump they would resign if Clark was installed, and they wouldn’t be the only ones. Donoghue said that every assistant attorney general would resign and that it would lead to hundreds of resignations in the department within 48 hours. Clark would be leading a “graveyard,” they said. Trump made his decision by the end of the meeting.

Trump didn’t appoint Clark, but he did proceed to stand on stage on January 6 and repeat the same voter fraud lies that his DOJ had debunked for months before inciting a violent mob on the Capitol. While Trump was watching the violence unfold in the White House, Rosen and Donoghue were restoring order. The DOJ sent 500 agents and officers from FBI and ATF, as well as US marshals, to the Capitol. Rosen spoke to Pence twice. Donoghue helped to reconvene the Joint Session of Congress at 8pm. Neither Rosen or Donoghue heard from Trump on January 6.

So what was the Republican congressmen’s role in all this? On December 21, several Republican lawmakers met Trump in the Oval Office to discuss how they could fight back against voter fraud. At the beginning of the hearing, Rep. Adam Kinzinger (R-IL) played footage of his fellow Republican lawmakers publicly pressuring the DOJ to do more to overturn the 2020 election. The clips included Rep. Jim Jordan (OH), Rep. Matt Gaetz (FL), Mo Brooks (AL), Paul Gosar (AZ), Louie Gohmert (TX), and Andy Biggs (AZ).

By the end of the hearing, this footage was put into perspective. Many of those same Republican lawmakers who pushed Trump’s efforts to overturn the election also asked for a pardon. The committee revealed a January 11, 2021 email from Mo Brooks asking for a pardon for himself, Matt Gaetz, and “every congressman and senator who voted to reject the electoral college vote.” Former aide to Mark Meadows, Cassidy Hutchinson, testified that Brooks, Gaetz, Biggs, Gohmert, and Scott Perry asked for pardons. Hutchinson says she also heard that Rep. Marjorie Taylor Greene (R-GA) asked the White House Counsel for a pardon. Jim Jordan asked for the status of pardons, too.