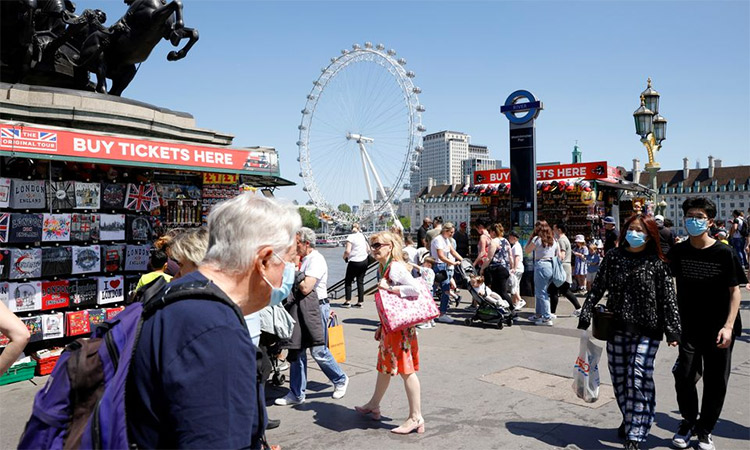 People walk on Westminster Bridge, with the London Eye in the background. Reuters

It’s not the Tube, though travelling on London Underground during a heatwave is a bit like taking a one-way ticket directly into hell, into Dante’s Inferno; the screams and cries of the damned all around you.

It’s not work, even though by mid-afternoon the air conditioning has warmed to a murky soup, and the long-sleeved shirt you wore to look “professional” is now sticking unpleasantly to your back, a little like the “to do” list you promised your boss by lunchtime.

It’s not even being in the centre of town, which for me would be London — though pushing through the crowds is exhausting, and being surrounded by the warm, lazy (does anyone else notice how slowly people walk when there’s a heatwave?) throb and hum of bodies can certainly make you feel suffocated, irate and stifled. It is the equivalent of a nightmare, one of those dreams where no matter how fast you pump your legs you only go backwards, or are rooted to the spot, like Stranger Things; like wading through fleshy treacle.

And, while we’re talking bodies, a sidenote: it’s interesting how as soon as it’s hot out, nobody cares. Suddenly, skin is an open battlefield, the streets suddenly buzzing with hidden scars and moles, tattoos and piercings. You see slivers of strangers you’d never expect to, close up — because we do a damn good job of masking ourselves at every other time of year, don’t we? But then the sun comes out and we all gain access to parts of each other that we wouldn’t share with even our closest confidantes, or outside of some other kind of steamy situation. It can be both a shock and a privilege.

Anyone who knows me will realise I’m a big fan of a caftan; the wider and more voluminous the better. I like to waft around in one from the 1970s, most days (when I’m not wearing a Victorian housecoat to WFH). Yet on days when the mercury reaches 34 degrees, as is so hellishly forecast, I’d do the school run in a bikini top and shorts and not even think twice about it. In fact, today – with several heat health alerts covering much of England, and temperatures predicted to rise to as much as 34 degrees in certain areas, making it the hottest day of the year so far — I am, and I will, and I’ll merrily wave hello at Bob the school caretaker as I sashay past him at the gate. But that’s where I must reach my inevitable, soul-crushing conclusion: because the worst thing to do in a heatwave — bar none? Host a playdate.

Yep: after school I won’t just have my usual two young children to feed and entertain, but four of them (one pal apiece) all clamouring for ice lollies, for a chance to play outside (which as any parent will empathise, only brings with it the hideous and unbearable task of administering sun cream, which is about as inviting as giving your pet cat a soothing bath).

They’ll want less cloths as possible within five minutes of entering the house, which is always awkward when — as is the case for me today — you’re hosting someone’s child for the first time, and you don’t even know their parents yet. With kids and summer heat you’re truly damned if you do and damned if you don’t: too hot indoors to sit quietly and watch a film (how I long for winter blankets and “duvet days”), too hot to go outside without risking sunburn — and if you have young kids but don’t have access to a garden but do want to go outside, then that means escorting four under-10s ON THE BUS INTO HADES (or the local playpark).

There, your feet will slowly steam on the asphalt as the kids you’re supposed to keep safe from harm risk third-degree burns by racing each other down the slide (whose idea was it to make playground slides out of metal?); they will fight to the death in the queue for a Nobbly Bobbly or a Feast, which will itself bankrupt you; you’re set back a cool £3.50 per Mr Whippy these days (show me a parent who doesn’t loathe the tinkly sound of the ice-cream van and I will show you a liar).

“Feral girl summer” is a thing, now, apparently – but if you’ve got kids then you’ve been basically going feral since day one. There’s no way you can be anything else, not in a heatwave.