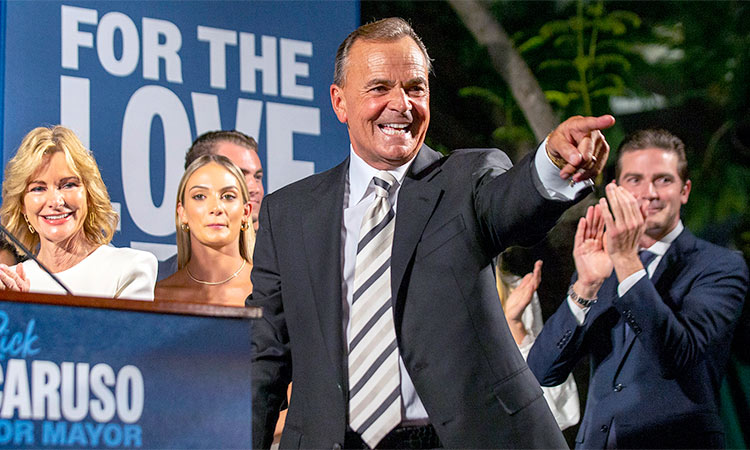 Rick Caruso, a billionaire real estate developer, vowed a tougher response to homelessness after he entered a runoff in the Los Angeles mayoral race. File/Associated Press

Shopping mall developer Rick Caruso can buy just about anything he wants without first balancing his checkbook. His $100 million yacht didn’t come close to breaking the bank, and the billionaire Brentwood resident has owned spreads in Malibu and Newport Beach as well, along with a Montecito hotel where rooms can run around $10,000 a night.

For all his money, though, and after spending roughly $40 million on his LA mayoral campaign in the last six months, he hasn’t been able to buy the lead.

In updated tabulations from the June 7 primary, US Rep. Karen Bass has leapfrogged Caruso, moving into the lead with 41% of the vote to Caruso’s 38%. In earlier returns, Bass had trailed by as many as 5 percentage points.

Jeffe said she went back and looked at 18 political races in California involving self-financed millionaires, including Silicon Valley mogul Meg Whitman, who spent $150 million or more of her own fortune in a run for governor against Jerry Brown.

“Of the 18, only one reached for the gold and caught it,” Jeffe said. “Arnold Schwarzenegger.”

Caruso looks sharp in designer suits and his shopping mall fountains never stop dancing, but he’s not a cinematic action hero, nor does he have the kind of name recognition Schwarzenegger had on the way to becoming governor.

Let’s not forget, though, that votes are still being counted, even if for the life of me I don’t understand how it can take so long, especially given the paltry turnout. There once was a TV show called “Mr. Ed,” starring a talking horse who could count, and maybe we should see if he’s available to help out. It could be days or even weeks before the county is done here, and that means the lead could change again, with Caruso and Bass trading the pole position.

What’s certain at this point is that the two of them are guaranteed a spot in the November runoff, and one of them is going to be the next mayor of Los Angeles.

But the last two updates represent “a significant boost” for Bass, and is bound to affect morale in her camp during the primary, said Raphael Sonenshein of Cal State LA’s Pat Brown Institute for Public Affairs.

If she holds on to the lead, Jeffe said, “a lot of wallets might open up” to help her take on another expected onslaught of Caruso advertising. Even before the latest update, Bass has been upbeat about running close to the lead — in polls and the early returns — despite having been outspent more than 12 to 1.

A couple of theories are circulating about whether Caruso’s advertising, which hit you everywhere but in your sleep, might have reached a saturation point, as in, good Lord, not him again. Or that in the closing weeks of the primary, anti-Bass ads attempted without any backing to link her to corruption, and there might have been a backlash.

On the day he voted in Boyle Heights, Caruso posed for a photo with supporter Griselda Chapa, who told me she was tired of waiting for career politicians to do something, and she told Caruso he was definitely going to win.

“From your lips to God’s ears,” said Caruso, who told Chapa he had prayed in church that morning with his pastor, and he intended to work hard for Chapa every day as mayor.

On his way to fill out his ballot, I asked Caruso if he was going to keep up the media blitz throughout the general election. He told me he didn’t know yet. He still had to discuss it with his team.

If he spent $40 million to get this far, I wouldn’t be surprised to see him top that in the general. But he might want to think about fine-tuning the spiel.

“When I first saw his ads on television, I thought these are good, well-produced, strong and with the right message,” Jeffe said. “But then I saw them so often I began to realise he’s not really telling you anything. Everybody’s going to do something about homelessness. Everybody’s going to do something about crime. But there were no specifics and his argument, to me, looked thinner and thinner.”

That’s the problem with elections waged this way — it’s hard to get past simplifications, and sometimes that’s the strategy. Keep it simple and don’t muddy the message.

But I’m not so sure that’s going to work in this election. The central issue — homelessness combined with the lack of affordable housing — has been framed for years, and as Jeffe said, we’ve heard multiple claims from people saying they’re going to fix it.

Bass’ first comments about her homelessness plan, when she announced her candidacy, landed with a disappointing thud, because it was a regurgitation of the same old, same old. She’s filled in some gaps since then, and her best argument is that she’s going to be able to shepherd the necessary forces as someone who has worked as a state and federal lawmaker and knows most of the local power players.

But I still want to hear more specifics on how she plans to house 20,000 people in her first year and how she intends to grapple with the legal, financial and real estate obstacles — along with a meth epidemic and mental health catastrophe — not to mention the fact that in the current structure no one agency or person is in charge. All the same questions apply to Caruso. He was smart, and right, to wage his campaign on the idea that our fearless leaders can’t get a handle on homelessness and messy streets, or corruption, and crime is rising.

But he grossly oversimplifies the challenges and has kicked sand in the faces of public officials whose help he’ll need to get anything done. He likes to say we need housing and he’s a builder, as if that’s the perfect fit, but here’s a thought:

He’s known for years that he wanted to be mayor. Given the epic shortage of affordable homes for working people and those teetering on the edge of homelessness, why didn’t he build something other than shopping malls, high-end housing and $10,000-a-night hotel rooms?

It would have looked great on his resume, and he might have gotten a greater return on his $40 million investment.

But with five months to go, this is anybody’s race to win. And Los Angeles stands ready, after too long a wait, for someone to take charge.

It’s a year of voting nervously, as the US outcome is set to dramatically change the course of history

My 2020 presidential ballot came in the mail recently. I plucked it from the mailbox and held it nervously, the way you might hold a fragile heirloom or a baby or a bomb. So much power in such a small package. Handle with care.