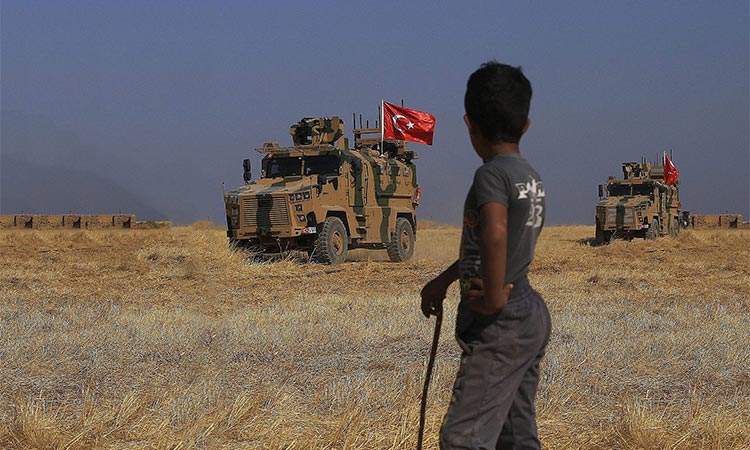 Turkish armored vehicles patrol as they conduct a joint ground patrol with American forces in the so-called "safe zone" on the Syrian side of the border with Turkey, near the town of Tal Abyad, northeastern Syria. File/AP

Turkey it seems is keen to open a fighting front on its border with Syria. The motive is a simple one of getting rid of the presence of the Kurdish-based Syrian Democratic Forces (SDF), which had successfully fought against the Daesh forces in the north of Syria. Turkey’s objection to the SDF is that it has elements of the banned Kurdistan Workers Party (PKK), which has been designated a militant organization by Turkey, the European Union, and the United States.

Turkish President Recep Tayyip Erdogan wants to create a 30-kilometre buffer zone on the Turkey-Syria border, and relocate the Syrian refugees in Turkey, most of whom fled during the Syrian civil war that erupted after the Arab Spring of 2011. President Erdogan has identified Tal Rifaat, under the control of SDF, and Manbij to the east, as the areas he wants Turkey to wrest from SDF. On Thursday, thousands of Syrian National Army (SNA) soldiers, the Turkey-supported force, drove through Azaz in the northern Syrian province of Aleppo, as a declaration of intent to launch military operations against the SDF. Russia has meanwhile asked Turkey not to launch the operation.

Turkey had already taken stretches of territory after fighting the Daesh forces as well as the SDF. But key cities like Tal Rifaat, Manbij, and Kobane are still with SDF, and Erdogan wants to take control of them. The SDF was once considered part of the coalition. A statement of the SDF earlier this month “confirmed the readiness of [SDF] forces to coordinate with forces of the Damascus government to confront any possible Turkish incursion and to protect Syrian territories against occupation.” Turkey has no other military ambition than to keep the Kurdish SDF away from its borders, even as it keeps a tight control over Kurdish rebellion inside Turkey. According to SNA, the government and the Iranian militias were reinforcing forces in the northern areas, and Russia too is doing the same.

Turkey however has no intention of occupying Syrian territory and going deep into the country. Its only concern is the presence of Kurdish SDF are its border, and secondly, it does not want the Syrian refugees crowding its cities, and wants to keep them near the Syrian border. And if this involves fierce fighting it does not want to pull back. Paradoxically, this would involve Turkey confronting Russian forces in the north of Syria even as Turkey is trying to mediate between Russia and Ukraine in the ongoing war in Ukraine. It shows that there are no definite dividing lines between friends and foes, that you can be friend and allies in one situation and could be arrayed against each other in another situation. The SDF, comprised mainly of Kurds, and should have been fighting the Alavite Bashar Assad government, but it has ended up fighting along with Assad as it had to face the Turks. The political lines in West Asia and Europe are indeed blurred, and it does not make things any clearer.

The Americans are keen to dislodge the Assad government and his Baath party as they had overthrown Saddam Hussein in Iraq, but Assad has turned out to be a tougher proposition. So the conflicts continue to rage, and it takes toll of the lives of ordinary people, and in this instance it the lives of common Syrians that is at stake. The civil war in Syria had created the Syrian refugee problem, and most of them are stuck in Turkey because European countries like Hungary and Poland are refusing to let them through to Germany. And there are no easy solutions to these knotty issues.