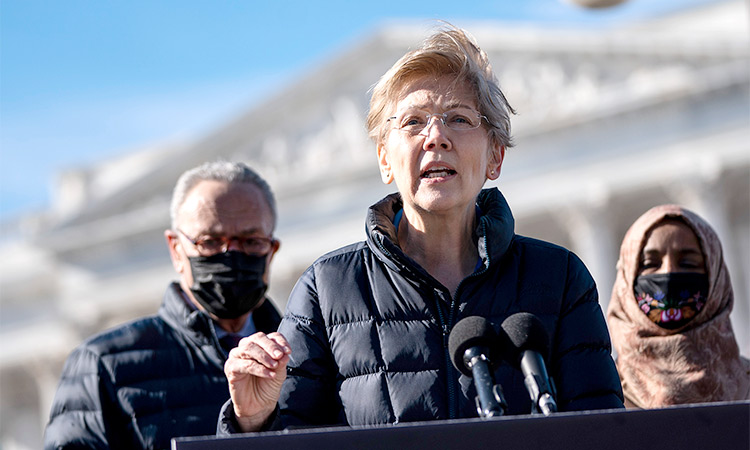 Sen. Elizabeth Warren, D-Mass, speaks during a news conference about student debt outside the US Capitol in Washington, DC. Tribune News Service

Sen. Elizabeth Warren may have entered politics as a Harvard Law professor, but her case for a massive elimination of up to $50,000 in debt for America’s 45 million student-loan holders is deeply rooted in a different discipline: math.

“It was not just a random number — it was a number to get the most relief to the most people,” the Massachusetts Democrat and 2020 presidential candidate told me in a phone interview Wednesday, racing between votes on a busy day on Capitol Hill.

With her trademark professorial patience and always backed up by the data, Warren made her pitch for a massive assault on America’s $1.75 trillion college debt bomb that would be substantially more than a $10,000-per-person trial balloon floated by Team Biden — but also not the total debt relief backed by some activists.

Warren said that among the various options, eliminating $50,000 per person brought the best results in reducing one of the worst aspects of the student debt crisis: its role in exacerbating the widening wealth gap in America between whites and African Americans, as the latter has been slammed harder with college loans. The senator said wiping out debt at the $50,000 level cuts the Black-white wealth gap by 27 percentage points — three times the rate if only $10,000-per-borrower is canceled, as some in the Biden administration have advocated.

But Warren also said that with debt relief at a level higher than $50,000, “the numbers become unwound” — meaning, basically, that you pick up too many med school or law school grads who borrowed large amounts knowing they’d make the future income to pay it back relatively painlessly. The goal, she explained, isn’t to forgive the debts of “Wall Street partners or plastic surgeons, who are going to do just fine.”

For Warren, who since her White House bid has been a leading voice in Washington for sweeping college debt elimination, the goal isn’t bailing out those doctors and deal-makers, but rather the people who comprise the largest pool of struggling loan recipients: middle-class folks, many of whom don’t have bachelor’s degrees, and many who were enticed to borrow substantially more than they can repay with their current jobs.

“The need to cancel student loan debt is enormous, and it starts with who is carrying this debt,” Warren said. “It’s hard-working middle-class and working-class people who are trying to get an education and weren’t born into the families who can afford to write a check for that.”

Warren was eager to speak to me because the issue of relieving the college debt burden, which has kept many younger adults from buying or renting their own place or even getting married, is rapidly coming to a head. Although all loan repayments have been on hold since the start of the pandemic in early 2020, President Joe Biden — who’d promised at least $10,000 in individual debt relief during his campaign — is expected to make a move by the second half of the summer to eliminate some of the $1.75 trillion debt load.

Last month, administration sources leaked to The Washington Post — but then quickly backed away from — the $10,000-per-person plan that would also be “means tested’ to make sure that a small percentage of the highest earners wouldn’t benefit. Although that plan would completely eliminate the debt of more than 10 million Americans, critics say its roughly $300 billion in overall relief would barely make a dent in the overall problem. With a final decision seemingly still up for grabs, Warren and her allies — including Senate Majority Leader Chuck Schumer and a fellow icon of the left, Sen. Bernie Sanders — are pushing hard for a much bigger number.

Warren’s weapon in this fight is data. She wants more Americans to understand that some 42% of debt holders don’t even have a bachelor’s degree — sometimes because they borrowed for other kinds of career training but often because of the stress of trying to complete a four-year degree in today’s environment. They “tried college but life happened — a pregnancy, or they were already working two jobs and couldn’t hold it together with classes, or their mom got sick (and) they moved to another town,” she explained.

But many among the other 58% who did get college degrees still struggle to earn enough to pay back the large amounts they were are forced to borrow in an era of runaway tuition. That’s especially true, Warren noted, for young people who attended for-profit universities, including the scammiest versions — like Corinthian Colleges, where Biden just wiped out all $5.8 billion in outstanding debt — where students were pressured to take out maximum loans for degrees that had little worth in the job market. Many for-profit schools, Warren said, “have been caught in plain old fraud.”

But misinformation about the nature of the student debt crisis remains rampant. I agree with Warren that most of this bad info is spread by Republicans “because they understand that student debt cancellation is broadly popular.” But I’d add that sometimes the GOP gets an assist from Democrats like Biden, who at a February 2021 town hall lashed out at $50,000-per-student debt relief, claiming it would help “people who have gone to Harvard and Yale and Penn.”

Coincidentally, Warren noted in our interview that only 12% of students at Penn are taking out loans — the well-endowed Ivies tend to offer more in direct scholarships — while that figure rises to 51% for state-supported Penn State and a whopping 89% for Lincoln University, a historically Black school. She said these disparities help explain why 6% of white borrowers still owe money after 20 years, but the figure is 95% for Black loan recipients. She dismissed criticism that canceling student debt would disproportionately help the wealthy, noting that labor groups like the AFL-CIO and the Teamsters support her plan.

The reason is clear: Higher education, and the promise of a better life, remains the American Dream for the wide middle class. Indeed, I pressed Warren on what could be done, even with a large-scale debt cancellation this summer, to solve the root problem of lack of college affordability and access — a frequent theme in this column as well as my new book that comes out in August — that caused the current crisis.

The senator argued that the Biden administration should also implement income-based debt repayment going forward, so that paying off future debt is based on how much graduates actually earn, as opposed to the current mismatch between loan amounts and real-world paychecks. But she also argued for what seems to me like the more natural — if politically fraught — solution: that Congress and state legislatures — which sharply cut direct aid to higher education after the 2008 financial crisis — again finance higher learning in the public sector. 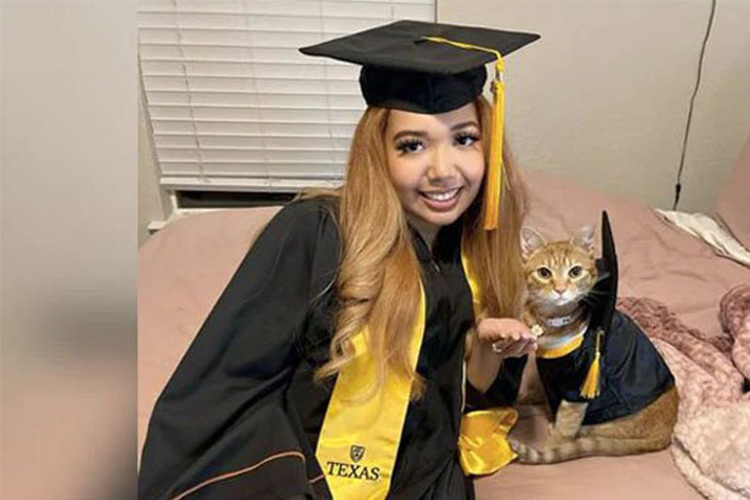 American student graduates with her cat

Explaining the reason, Francisca said that her cat Sookie attended all the online classes with her so in a way she also graduated with her. 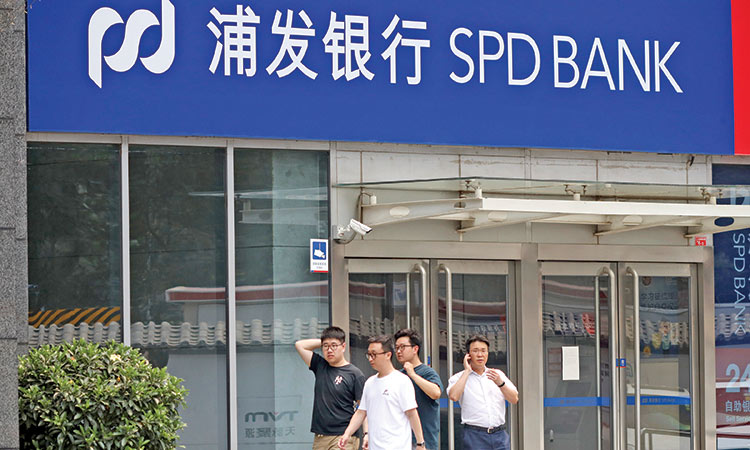