How many children have to die before America wakes up - GulfToday 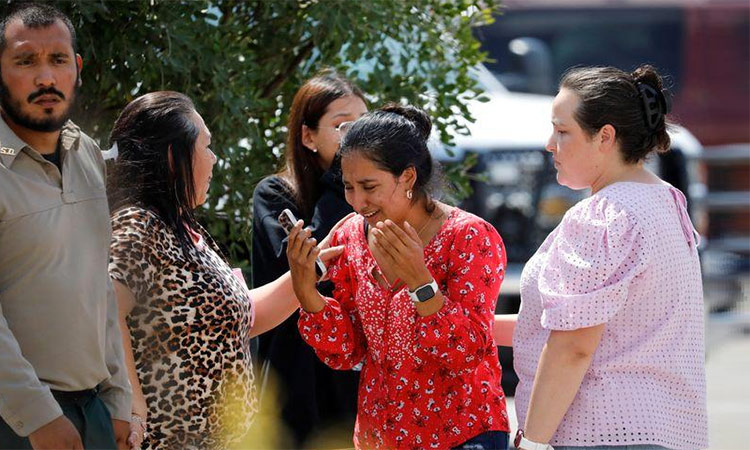 A woman reacts outside the Ssgt Willie de Leon Civic Center, where students had been transported from Robb Elementary School after a shooting, in Uvalde, Texas. Reuters


I just checked on my two children, asleep in their beds. They’re both under 10, and I’m fretting about the fact that one has a sore throat, the other asthma and a bad cough. Earlier today, they came home from school, full of chatter about their day. In America, there are parents exactly like me, with one crucial difference – they’re not tucking their kids into bed.

They’re mourning them. The news from Uvalde elementary school in Texas tonight is unthinkable. At least 19 children between the ages of five and 11 — the same age as my kids — and a teacher, dead after an active shooter was reported at Robb Elementary School in Uvalde, Texas, according to the district at the time of writing.

It is tragic, terrible — and enraging. This isn’t the first time I’ve had to write about the death of innocent children at the hands of guns in the supposed land of the free, and it won’t be the last. So what, now, is America going to do about it?

I remember reporting on the tragic death of Adam Toledo, last year. The 13-year-old was shot dead by police in an alleyway after being chased. Camera footage showed him moments before he was killed: arms in the air, oversized black Nike hoody, scruffy cap on backwards. The words on his chest, “Just Do It”, like a premonition. Just a boy. Moments later, he was dead.

Tamir Rice was a boy, too —just 12 when he was shot in 2014 in Cleveland, Ohio, by white police officer Timothy Loehmann. Tamir was reportedly carrying a replica toy gun — he was killed almost immediately, after police arrived at the scene.

Many gun violence victims are young, but there are older, terrible losses, too. Breonna Taylor – a medical worker – died after a botched raid on her apartment last year. George Floyd – it’s the two-year anniversary of his death at the hands of a white former Minneapolis police officer tomorrow, on May 25. Some names stick out. Many have rightfully sparked protest. But others will already be forgotten. Why?

Well, if these stories sound like numbers to you, if it feels like they blur, could that not be because they’ve become so commonplace as to be obscene? As to almost (though certainly never for the families) have become routine? The headlines merge into one, and the world sighs: a dozen or so dead. A tragedy at a university campus, a work place, a spa, a nightclub, a grocery store. Little more than two weeks ago, a gunman with a rifle and body armour opened fire at a supermarket in Buffalo, New York. Another day in America, another mass shooting. What a terrible waste of life.

Sometimes the victims are random. All too often, they’re members of Bame communities. How many fathers, mothers, medical workers and kids have to die before America wakes up? US President Joe Biden has already pledged to take action on gun violence – he announced a range of actions last year to aim to stop the sale of so-called “ghost guns”; and encourage the adoption of “red-flag” gun laws, denouncing gun violence in America as an “epidemic” and an “international embarrassment”. In April this year, he promised he would introduce a “comprehensive package” of measures to curb the killings.

If not now, when? Because he was right, there is a scourge blighting America – guns. And we’ll keep seeing parents mourning their kids, we’ll keep writing “thoughts and prayers” on social media, until America finally wakes up and scraps the Second Amendment, once and for all. Until then, more children will die. And we can’t do a thing about it.

The tragedy at Robb Elementary School, Texas last week has raised a number of questions: how can these shootings be prevented, how to identify seriously disturbed individuals and how to manage gun ownership? There are a number of suggestions ranging from tighter gun control to arming teachers but there is