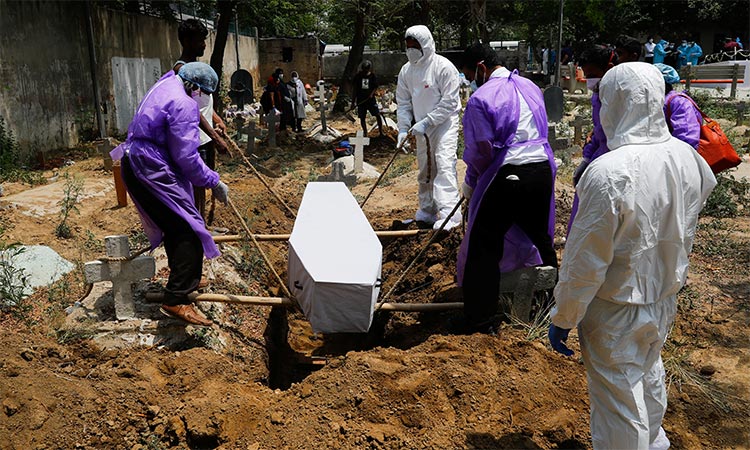 How many Indians died in the Covid pandemic that raged for more than two years? This has become a matter of dispute between the India’s federal and state governments on the one hand and the World Health Organisation on the other. Covid-19, as it was named, came to India directly from China’s Wuhan province, within days of its outbreak, through two girls from the southern state of Kerala who were enrolled in a medical college there.

More cases were reported later among passengers who flew in through the international airports from counties far and near. In a short period, India climbed to the third spot on the world Covid table, just below the United States and Brazil in the number of reported cases. It held that high spot for a log while but the country derived some comfort from figures that showed a comparatively low casualty rates.

WHO has now cast doubts on those figures. In a report released last week, WHO estimated that more than 4.7 million Indians may have died due to Covid in 2020 and 2021. This is nearly 10 times the officially recorded casualty figure of 480,000 for these two years. While WHO was working on the new report, the Indian government was aware of the methodology adopted and it raised objections. However, WHO saw no need to change the methodology.

This is not the first time that WHO has voiced doubts about Covid data furnished by a member state. And India is not the only country which has been put under a cloud of suspicion. According to the WHO report, the global Covid toll during 2020-21 was about 15 million – two and a half times the official figure of 6 million. This suggests that under-reporting was widespread but nowhere was it as high as in India. If the new WHO figures are correct, half of all the unreported Covid deaths occurred in India.  This raises the question whether figures from one country alone can contribute to a massive distortion of global data. The national data provided by the Indian government is worked out by adding up the data furnished by the state governments on a daily basis.

India has about two dozen states, several of them larger than most countries of Europe. If so many states distort figures at the same time the result can be gross distortion. Interestingly, several state governments joined hands with the Centre against WHO, forgetting party differences.

Leaders of two national opposition parties did not join their state governments in backing the Centre against WHO. Congress leader Rahul Gandhi and Communist Party of India (Marxisr) General Secretary Sitaram Yechury felt that the WHO finding must be taken seriously. In the beginning there was lack of clarity in official circles in India on how to count Covid deaths.

According to Indian officials, if WHO figures are accepted, it follows that more than 90 per cent of the deaths were not recorded in the first two years. That appears to be too high to be true.

Again, if Covid accounted for 830,000 of the 8.1 million deaths in 2020, as WHO says, non-Covid deaths that year were only about 7.3 million, whereas annual deaths in India have been above 8 million since 2007. This is a small discrepancy which can be explained as the result of the early confusion between Covid deaths and co-morbidity deaths. The decennial census operations, which should have been completed early last year, could not be held at all because of the pandemic. Hopefully, we will be able to have a better understanding of the Covid casualties when the census data is in.