America has taken its Arab allies for granted - GulfToday

America has taken its Arab allies for granted 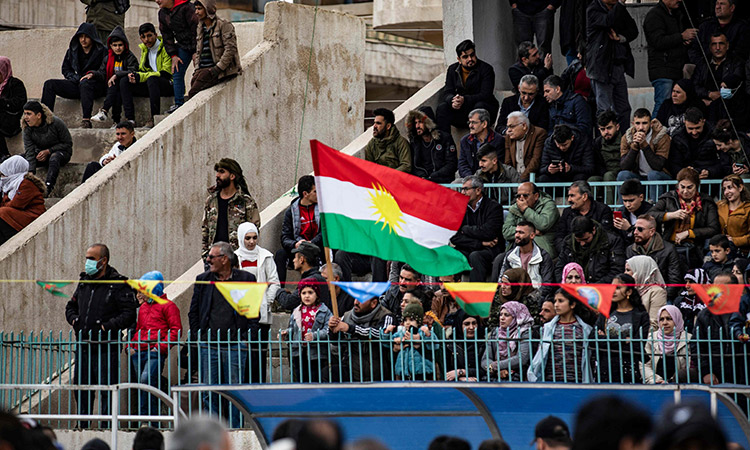 Syrian Kurds gather in the Baladi Stadium to commemorate the bloody clashes between members of their community and Syrian regime forces in 2004, in Syria’s northeastern Hasakeh province, on Saturday. Agence France-Presse

If confirmed, the Reuters’ report of the appointment of Juma Awad Al Badri, the founder’s brother, to lead Daesh could provide continuity in the core leadership of the decentralised movement and reclaim a measure of command and control.

As the head of Daesh’s Shura Council, Badri is a logical choice. He has chosen “Abu Hassan Hashemi Al Qurayshi” as his nom de guerre in line with Daesh practice as it alleges descent from Al Quresh, the tribe of the Prophet Muhammad (PBUH) and gives Badri “baraka,” spiritual charisma.

His brother Ibrahim Awad Ibrahim Ali Al Badri, known as “Abu Bakr Al Baghdadi,” established the precursor to Daesh in 2012, took control of the north central Syrian city of Raqqa in 2013, and appointed himself caliph in 2014 after his fighters swept across the border into northern Iraq and seized control of Mosul. The caliphate was demolished by a relentless campaign waged by Syrian, Iraqi and Western forces between 2014-19.

In October 2019, Baghdadi committed suicide in order to defy capture by US special forces when they raided his hideout in the northwestern Syrian province of Idlib.

The new caliph has, according to Reuters, wisely left Idlib and crossed into Iraq, his home territory. As Idlib is ruled by Daesh rival and Al Qaeda twin Hay’at Tahrir Al Sham which, it has been suggested, may have leaked intelligence on the men’s whereabouts to Turkey or the US-sponsored Kurdish militia controlling the northeastern region of Syria. This being the case, it is hardly surprising that the newly appointed caliph should seek sanctuary in his homeland where he may feel safer living among Sunnis alienated by the fundamentalist Shia government in Baghdad.

Why? The history of these radical groups begins with the 2003 US war on Iraq when Jordanian militant Abu Mussab Al Zarqawi established Al Qaeda’s branch in that country and mounted attacks on the provisional government, state institutions and the Jordanian embassy in Baghdad.

In June 2006 Zarqawi was killed in a US airstrike and the leadership was assumed by Egyptian Abu Ayyub Al Masri. This group morphed into Islamic State in Iraq and seized territory in that country. After Masri was killed, Baghdadi took over and the transformed the movement into Daesh.

In 2011, he ordered Abu Muhammad Al Golanni to set up a Syrian offshoot, Jabhat Al Nusra, to fight the Syrian government and establish an Islamic state in Syria. Nusra was branded a “terrorist” group by the US. In 2013, after Nusra had become the most successful of the multiple Syrian militant groups, Baghdadi ordered it to merge with Daesh, Golani refused and the two became bitter rivals.

Their memberships and activities diverged, deepening the division. Daesh, which recruited thousands of foreign fighters, focused on taking territory and establishing its false caliphate, which attracted tens of thousands of alienated Muslims from Western Europe to China. However, instead of creating a state conforming to the tenets and practices of Islam, Daesh’s rule was reactionary, brutal and cruel and led to the five-year campaign which led to its defeat and the dispersal of its surving fighters. Today 10,000 fugitive fighters roam Syria’s eastern desert and take refuge in Iraq’s north-eastern mountains. Although diminished and harried in its home territory, Daesh has exported both ideology and warfare to North and Subsaharan Africa, Central Asia, and South Asia.

Nusra/Tahrir al-Sham (HTS) took a different path. It relies mainly on Syrian and Iraqi recruits and remains committed to the fight against the Syrian government. Ironically, HTS obtained real estate by taking control of Syria’s Idlib province which hosts a variety of militant factions. HTS merged with half a dozen of these groups and dominates the Syrian Salvation Government which administers Idlib. HTS rules with an iron fist but not as harshly as Daesh. Under Turkey’s protection HTS has crushed more radical opponents and recruited or expelled Arab and foreign fighters based in Idlib. Still designated internationally as a “terrorist” group, HTS does not export its ideology or fighters. It strives to secure US recognition as a legitimate Syrian opposition movement and has had signal success as Idlib and Kurdish controlled areas in eastern Syrian are to be exempted from US sanctions imposed on the Syrian government, allies and supporters.

This is a very dangerous US directive. HTS remains an offshoot of al-Qaeda. Idlib is a breakaway province of Syria and a base for radicals in the Eastern Mediterranean. Idlib, the Turkish-held enclaves in northern Syria and the vast self-declared US-sponsored Kurdish “autonomous deprive region” in the east deprive Syria of territorial integrity and violate its sovereignty.

All too clearly Washington seeks to undermine Syria and render Damascus weak indefinitely. While HTS and the Kurds pursue separatism, Daesh maintains its presence, recruits young Iraqis, Syrians and Lebanese and continues attacks and spreads its ideology around the globe.

Meanwhile, the UAE, Bahrain, Oman and other Arab states have been restoring relations with Syria with the aim of promoting its reconstruction and revival as a core country in the Eastern Arab World. Without Syria, Lebanon, Iraq and Jordan cannot prosper and grow and instability will grow in the Levant and the Arab hinterland. Instead of listening to its Arab allies, Washington continues to go its own way without considering the predictable or unintended consequences for this region — and elsewhere.

The US has long taken its Arab allies for granted, ignored their interests, and pressed them to go along with its policies however harmful to their interests. The 2003 Iraq war was the most damaging, devastating and egregious of the campaigns the US has waged in this region. This was an unprovoked war of choice, unlike Russia’s assault on Ukraine which was the consequence of decades of Western dismissal of Russia’s constantly voiced existential concerns over the eastern-wards expansion of Nato.

If the US and Europe had made it clear years ago to Ukraine that it would not be admitted to Nato or the European Union, Ukraine might have been encouraged to follow the examples of Finland, Austria, Switzerland and Ireland by adopting politico-military neutrality.

All these countries are European-oriented, prosperous and able to make independent choices. Ukraine could have been like them. Instead, with misplaced Western backing, it chose to confront Russia and precipitated a devastating war which could lead to global economic recession.