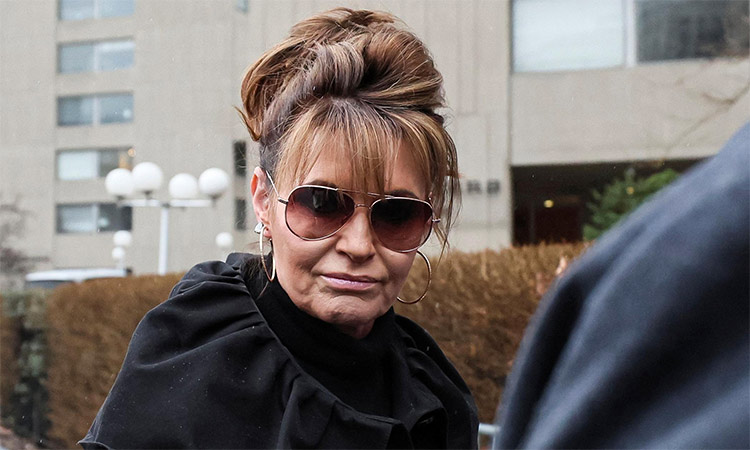 Sarah Palin arrives for the trial in her defamation lawsuit in New York. Reuters

Sarah Palin may have lost the first round in her libel suit against the New York Times after the jury concluded that the former vice-presidential candidate failed to prove that the newspaper acted with “actual malice” when it published an editorial linking her political action committee to the 2011 shooting of 19 people, including former Rep. Gabrielle Giffords, in Tucson, Arizona.

But when Palin appeals, her case has the potential to do more than reverse the jury’s verdict. It could fundamentally change the First Amendment by giving conservative judges what they have wanted for decades: the chance to overturn the Supreme Court’s landmark decision in New York Times v. Sullivan (1964) and its actual-malice standard. That would make it significantly easier for public officials and public figures to sue those who make inaccurate statements about them.

There was an unusual development in the Palin case. While the jury was deliberating, Judge Jed Rakoff announced that if the jury found for Palin, he would overturn that ruling. Several jurors learned of the judge’s decision before the verdict was rendered. The court of appeals and the Supreme Court will likely consider whether that improperly influenced the jury.

Nevertheless, that will not be the key issue in Palin’s appeal. Of much greater significance is an almost 40-year-old Supreme Court case involving a publication’s negative product review.

In Bose Corp. v. Consumers Union (1984), the court held that to protect the First Amendment, appellate courts have an obligation to closely scrutinize a trial court’s judgment when it rules against defendants in libel cases. Like Palin, Bose Corp. was a “public figure.” The trial judge ruled that the company was able to prove actual malice when its new speaker system was criticized in the respondent’s magazine. The court of appeals reversed, and the Supreme Court agreed with the appellate court.

Central to the Bose case — and Palin’s appeal — is the court’s interpretation of Section 52(a) of the Federal Rules of Civil Procedure. The Bose decision requires appellate courts to conduct a de novo review in cases involving the First Amendment to make sure that “the judgment does not constitute a forbidden intrusion on the field of free expression.” An appellate court must, in effect, retry the case by conducting an independent evaluation of the evidence to see if it justifies an exception to the usually robust protection the First Amendment provides for almost all forms of speech.

This goes against the way courts usually function. Appellate judges do not see witnesses in person to evaluate their credibility. They don’t have access to all the evidence the jury considered. They read briefs from the attorneys and hear oral arguments. Federal Rule 52(a) tries to prevent appellate judges from second-guessing the trial court’s evaluation of the facts by prohibiting the reversal of the lower court’s ruling unless it is “clearly erroneous,” a difficult standard to meet. The Supreme Court in Bose held that the First Amendment is too important to be subject to the clearly erroneous standard, and it noted that Rule 52(a) does not forbid a review of the entire trial record. But it did not answer a question of great importance: Can appellate courts conduct their own review when the media organisation wins at trial, as in the Palin case? Some legal scholars have argued that it is unfair to the plaintiff if such a comprehensive review takes place only if the defendant loses.

Bose is mainly about protecting the First Amendment. Justice John Paul Stevens wrote that the de novo requirement “reflects a deeply held conviction that judges — and particularly Members of this Court — must exercise such review in order to preserve the precious liberties established and ordained by the Constitution.” But he did not say that appellate courts can conduct an independent review only when the plaintiff wins at the trial level.

The crisis of democracy is a media crisis

This time last year, there was a cruel joke in circulation: The most spiteful year in recent memory would reset itself at midnight on Dec. 31, and we’d be forced to relive 2020 from the beginning. Funny, right? Not really. But we could tell the joke then because we finally

You know there’s a crisis in Westminster when the Americans care. Monday morning, an op-ed eviscerating Boris Johnson appeared in the Times, written by none other than Andrew Marr, perhaps the Grand Poobah of British political journalists. Crucially, though,