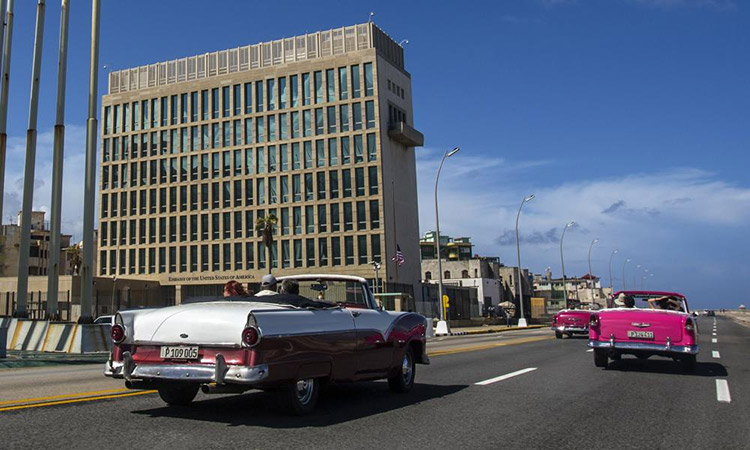 The US investigation into mysterious symptoms known as the “Havana syndrome” could provide Americans with long-overdue insights into the emerging threats of directed-energy devices.

Later incidents were reported in China, Russia, Colombia, Austria, Uzbekistan, the United Kingdom, Poland and other countries. While some theories blamed mass hysteria and even crickets, a rise in high-profile cases — including in and around the White House — compelled US officials to seriously consider a more nefarious and disturbing explanation: unseen electromagnetic weapons.

The official term for this syndrome is “anomalous health incidents.” A State Department spokesperson told me that “to date, no study, report or analysis has provided a categorical, comprehensive explanation.”

In October, President Joe Biden signed into law the bipartisan “Helping American Victims Afflicted by Neurological Attacks Act,” to provide care and compensation to government employees with symptoms. An official with the House Intelligence Committee chaired by Rep. Adam B. Schiff, D-California, told me the committee is “closely overseeing implementation of the HAVANA Act to ensure that all personnel receive the benefits and assistance they need.”

It may sound like science fiction, like the military’s UFO probe. But it wouldn’t be the first time US personnel were zapped by electromagnetic weapons. Between the 1950s and 1970s, the Soviets bombarded the US Embassy in Moscow with microwave radiation, prompting health concerns and this country’s then-classified exploration of such weaponry.

After the Cold War, debates about the technology’s dangers became the near-exclusive realm of people ridiculed as tin-hat conspiracy theorists. In 2001, then-Rep. Dennis Kucinich, D-Ohio, introduced legislation to ban the weaponization of “radiation, electromagnetic” or other energies against people, but it was dropped following media derision. Meanwhile, the US military continued developing such weapons, including the Active Denial System, or “Pain Ray.”

The US has been slow to respond to reported attacks against government personnel that many attribute to Russia. In January, a CIA report dismissed all but a couple dozen reports as having mundane explanations such as stress. But in a CBS “60 Minutes” report, “Targeting Americans,” which aired recently, CIA Director William Burns, whose colleague reported symptoms in India last fall, said he was taking reports seriously.

Watching this documentary, I thought about the thousands of private citizens who call themselves “targeted individuals” who’ve reported similar experiences, including perceived attacks by remote-controlled weapons causing long-term illness. They have been sounding the alarm for years about possible electromagnetic weaponry deployment on US soil, but they’ve been derided as delusional. Among them is my father.

A Mexican immigrant who worked in shipbuilding in San Diego before he was laid off, he believes the CIA experimented on him with electromagnetic weapons that caused him to collapse in pain and develop insomnia, among other things.

In his telling, which he’s never been able to prove, the CIA was testing the weapons’ ability to dramatically alter behavior — by targeting drug addicts with electronic intervention. (My father was using crack cocaine, and quit because of this perceived intervention.) Since telling his story in my memoir, I’ve received dozens of emails from others who claim they’re victims of similar electronic torture.

Investigations into the cause or causes of the “Havana syndrome” could offer some answers for these people, too. Of course, many are deeply skeptical of the CIA’s ability to uncover the truth given its history of secret psychological torture experiments targeting marginalized people starting in the 1950s.

The White House has not said whether the investigation would include cases involving private citizens. The victims’ legislation applies only to government personnel and their families. But Miles Taylor, a former Department of Homeland Security chief of staff in the Trump administration — who revealed his personal experiences of “Havana syndrome” symptoms in the “60 Minutes” report — told me he believes some testimony from private citizens is worthy of investigation, too.

“Authoritarian nation-states will go after their enemies regardless of whether they wear a government badge or not,” he said. “If these attacks are indeed being perpetrated by a nation like Russia, it wouldn’t surprise me if private citizens in certain capacities would be targeted for reasons that would advance the Kremlin’s agenda.”

Taylor hopes his “60 Minutes” testimony will encourage other victims to report. Many stay silent for fear of being perceived as mentally unstable. Since the report aired, he’s been contacted by multiple intelligence leaders and others with similar experiences. “I think we’ve only seen the tip of the iceberg,” he told me.

The investigation includes the State Department, the CIA and the departments of Homeland Security, Defense and Justice. They have until Friday to update their guidance for personnel. Earlier this month, Biden named the National Security Council’s senior director for intelligence programs, Maher Bitar, as interagency coordinator. But it’s not enough.

Mark Zaid, an attorney who has represented numerous government victims dating back to the 1990s, criticized the response as “completely disorganized and non-uniform.”

Zaid worries the legislation will be implemented unfairly, leaving people out. Olivia Troye, former Vice President Mike Pence’s homeland security and counterterrorism advisor — who also spoke to “60 Minutes” about her experience with the syndrome — shared similar concerns with me.

The Biden administration should create a centralized location for reporting cases, including by private citizens. The US can’t appropriately compensate victims without understanding the syndrome’s causes. That’s why investigators should scrutinize the United States’ own potential abuse of such technology, and collect testimony outside of US government personnel. Private citizens who’ve been reporting similar attacks since at least the early 2000s deserve to be heard.

Most of their claims may be baseless. But the health problems reported by high-ranking officials with no history of mental illness offer evidence that we should not categorically dismiss them.