Survey of river dolphins warns of threats to species - GulfToday

Survey of river dolphins warns of threats to species 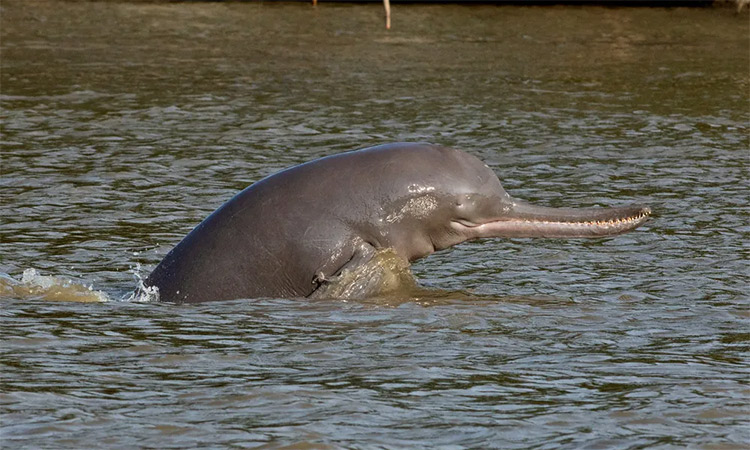 A November 2021 survey that claims to be the first such assessment of the Ganges river dolphin in the Mahananda river in India may help close the existing information gap in the International Union for Conservation of Nature (IUCN) Red List Assessment for the dolphin species.

As reported by Mongabay-India, in a population estimate of the Ganges river dolphin in the Mahananda river in Bihar and West Bengal, a total of 190 individuals were counted by two teams of scientists from the Wildlife Conservation Trust (WCT). The Mahananda is a 360 km river, one of the tributaries of the Ganges, which originates in Darjeeling and traverses through the Indian states of Bihar and West Bengal. The survey also marks the first baseline documentation of biodiversity, fisheries, and human use/misuse of the river, which will help in future surveys, biodiversity assessments, and conservation planning.

Mongabay-India points out that, according to the report, dolphin mortality due to entanglement in nets and oil-baited hook lines continues to remain a challenge in the river. The method of fishing with oil-baited hook lines is fatal for dolphins because dolphin oil is illegally obtained after killing live dolphins or using dead dolphins (their carcasses) to extract oil. Unregulated sand mining, pollution, solid waste dumping and construction of embankments for flood control have negatively impacted Mahananda ecology and the survival of dolphins and other riverine species.

The survey also marks the first baseline documentation of biodiversity, fisheries, and human use/misuse of the river which will help in future surveys, biodiversity assessments, and conservation planning.

The study was submitted to the Department of Environment, Forests, and Climate Change Government of Bihar by researchers at the Riverine Ecosystems and Livelihoods programme of the WCT. It presents the first ever population estimate of endangered Ganges river dolphins for the Mahananda River in India.

The Mahananda, until now, remained the only major Indian river where Ganges dolphins were known to be present, but whose status had never been assessed even once for the entire stretch. The survey covered a 250 km stretch of the river over 10 days.

The Executive Summary of the report states that the Mahananda thus harbours a significantly large resident and breeding population of Ganges river dolphins. The study states that the results of the survey are of immense significance for the imminent “India-wide” population estimation exercises being planned by the Wildlife Institute of India with state forest departments and other partner organizations.

It stresses on the need to assess the extent of dolphin mortality in fishing nets, to check whether illegal extraction of dolphin oil is prevalent, to investigate if the fishermen are part of the clandestine supply chains for the procurement and supply of dolphin oil, to study the impacts of sand mining on river turtles as there was a glaring absence, and to harness local community support for the protection of dolphins.

The Ganges river dolphin falls under the Indian Wild Life (Protection) Act and has been declared an endangered species by the IUCN. The dolphin is considered an indicator of freshwater ecosystem degradation. According to the Worldwide Fund for Nature (WWF), The Ganges river dolphin can only live in freshwater and is essentially blind. They hunt by emitting ultrasonic sounds, which bounces off of fish and other prey, enabling them to “see” an image in their mind. They are frequently found alone or in small groups, and generally a mother and calf travel together.

Its habitat lies within one of the most densely populated areas of the world. This has led to more dolphins dying as a result of accidentally being caught in fishing nets, also known as bycatch. The Ganges river dolphin is still hunted for meat and oil, which are both used medicinally. The oil is also used to attract catfish in net fishery. Industrial, agricultural, and human pollution is another serious cause of habitat degradation.

The Ganges river dolphin is important because it is a reliable indicator of the health of the entire river ecosystem. The government of India declared it the National Aquatic Animal in 2009.