McCarthy is spineless who nonetheless owes us truth - GulfToday

McCarthy is spineless who nonetheless owes us truth 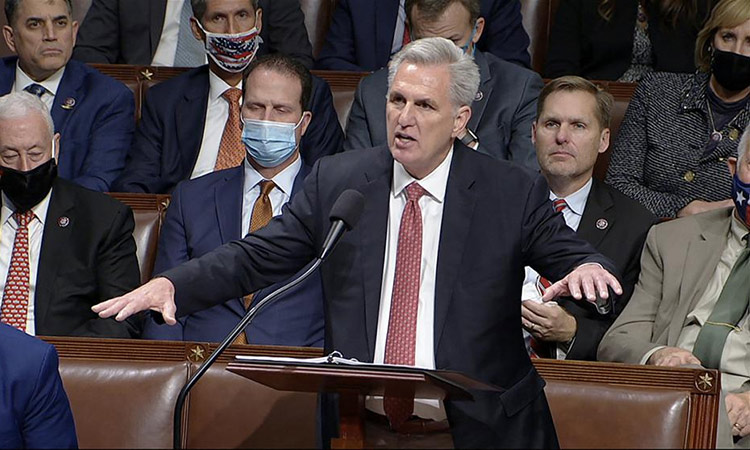 House Minority Leader Kevin McCarthy of California speaks on the House floor during a debate on the Democrats’ expansive social and environment bill at the US Capitol in Washington. File/Associated Press

Now that Devin Nunes has slunk off to the Trump-a-verse, is there anyone in Washington who is as transparently cynical, cowardly and dishonest as House Minority Leader Kevin McCarthy, the Republican shape-shifter from Central California?

Here is a man who blamed then-President Donald Trump for inciting the Jan. 6, 2021, insurrection … before changing his mind.

A man who was for a bipartisan investigation of the horrible events of that day … before he was against it.

A man who said he was willing to testify before an investigative committee about his conversations with Trump on that terrible day … before he decided not to.

On Thursday, CNN’s Don Lemon described “the duality of Kevin McCarthy — that’s a kind way of putting it.”

And now, because McCarthy is desperately trying to stay on Trump’s right side and become House speaker, McCarthy is threatening to retaliate against House Democrats for pursuing the crucial Jan. 6 investigation, for doing their jobs.

If Republicans do retake the House in November and McCarthy ascends to the top post, he said last week that he would strip Democratic Reps. Adam B. Schiff, Eric Swalwell and Ilhan Omar of their committee assignments.

Why? Because he would rather retaliate than legislate.

And, of course, in July, House Speaker Nancy Pelosi refused to seat two of McCarthy’s five picks for the House Jan. 6 committee. She accepted three Republicans and nixed two, the unbearable Jim Jordan of Ohio and Jim Banks of Indiana.

McCarthy, it should be noted, then picked up his marbles and went home. He withdrew from the process entirely and refused to appoint any of his members. In response, Pelosi invited onto the committee two Republicans who have not been cowed by Trump, Liz Cheney of Wyoming and Adam Kinzinger of Illinois.

Pelosi, by the way, was not just within her rights as speaker to refuse to seat Jordan and Banks. She essentially had no choice.

Jordan and Banks have both demonstrated zero interest in sussing out the truth about Jan. 6. Both were vocal critics of the committee’s very existence. Nominating them in the first place was simply further proof of McCarthy’s bad faith, fealty to Trump and obstructionism.

Jordan beclowned himself every time he opened his mouth during the House Intelligence Committee’s hearings on the first Trump impeachment. For his performance, Trump awarded him the Medal of Freedom.

But more important, Jordan has no business on the committee because he is a material witness to the events of Jan. 6. And so, for that matter, is McCarthy. Both have refused the committee’s invitation to testify, speciously claiming they have no relevant information to share — as if it’s up to them to make that judgment — that the investigation is an exercise in Democratic partisanship and serves no legitimate legislative purpose.

Contrast that to the House Republicans’ Benghazi hearings spectacle. Recall that McCarthy infamously admitted on national television that they were nothing more than political theater designed to dirty up Hillary Clinton. “Everybody thought Hillary Clinton was unbeatable, right?” he told Sean Hannity. “But we put together a Benghazi special committee, a select committee. What are her numbers today? Her numbers are dropping. Why? Because she’s un

trustable. But no one would have known any of that had happened, had we not fought.”

The refusal of McCarthy and Jordan to cooperate puts committee members in the uncomfortable position of having to decide whether to issue subpoenas to their own colleagues.

“I wish that he were a brave and honorable man,” Cheney said ruefully of McCarthy last week in an interview with CNN. “He’s clearly trying to cover up what happened. He has an obligation to come forward and we’ll get to the truth.”

At her weekly news conference, Pelosi said McCarthy “has an obligation, as we seek the truth, to help with that.”

Schiff, who used to be friendly with McCarthy, did not mince words: “By his own admission, Kevin McCarthy is a key witness to the events of January 6 and Trump’s response to the violence,” he said by email Friday. “Nevertheless, it should come as no surprise that McCarthy is refusing to cooperate with the Select Committee’s investigation, because McCarthy always puts Donald Trump’s interests ahead of the country. And from the very beginning, Trump and McCarthy have vigorously opposed any effort at accountability.”

Thankfully, the truth about Jan. 6 is already emerging in ways that are beyond the control of Trump lackeys like McCarthy and Jordan.

On Thursday, the Justice Department announced that 11 people, including Oath Keepers founder Stewart Rhodes, had been arrested and charged with “seditious conspiracy” in connection with the plot to invade the Capitol to prevent Congress from certifying President Joe Biden’s victory.

Contrary to sweeping Republican efforts to downplay the attempted coup, this was not a spontaneous act by dupes who let Trump goad them into criminal behaviour.

According to the federal grand jury indictment, the Oath Keepers, a right-wing militia group that recruited former and current military and law enforcement personnel, conspired to violently thwart the peaceful transfer of power.

The defendants, according to the Justice Department, organized into “teams that were prepared and willing to use force and to transport firearms and ammunition into Washington, DC”

The indictment quoted many of the Oath Keepers’ internal communications, many about weapons being stashed just outside Washington. “It will be a bloody and desperate fight,” wrote Rhodes in one. “We are going to have a fight. That can’t be avoided.”

There is no question now, a year later, that anti-democratic conspirators armed to the teeth were prepared to do violence to overturn the results of a fair and fraud-free election.

The fact that they failed does not make the attempt any less grave.

McCarthy needs to tell Americans what he knew, when he knew it and exactly what Trump told him on Jan. 6.

Otherwise, he has made himself into a confederate of the insurrectionists and fools who, as Biden so memorably put it, held a dagger to the throat of our democracy that day.

Democratic California Governor Gavin Newsom is facing a recall election next Tuesday. Thanks to the recall’s poorly conceived rules, a Republican 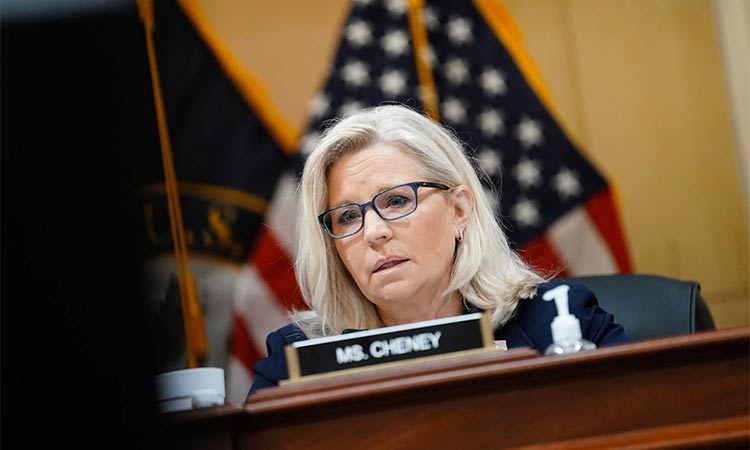 As the sun set in Wyoming, US Rep. Liz Cheney described her blowout loss as the beginning of a more consequential step in her political career. She summoned Abraham Lincoln, who lost elections for the House and Senate and still went on to become one of the nation’s most accomplished presidents.

The unexpected rise in inflation reported on Tuesday was an unwelcome blow for President Joe Biden’s Democrats, but a new Reuters/Ipsos poll shows Democratic voters just as enthusiastic as their Republican counterparts, pointing to a potentially close contest in November’s elections. Republicans remain favoured to win

There is as yet no clarity about the exact wins and losses for each side in the United States mid-term elections, where the whole of the lower house of the Congress, the House of Representatives, is re-elected, and one-third of the upper house or the Senate, and dozen or more state governorships. It looks like that the Republicans will have an edge in the House of Representatives, and the majority in the Senate could remain with the Democrats. But there is enough and more clarity about the major trends in these elections. The Democrats were not routed as was expected because of high inflation and the tottering economy.