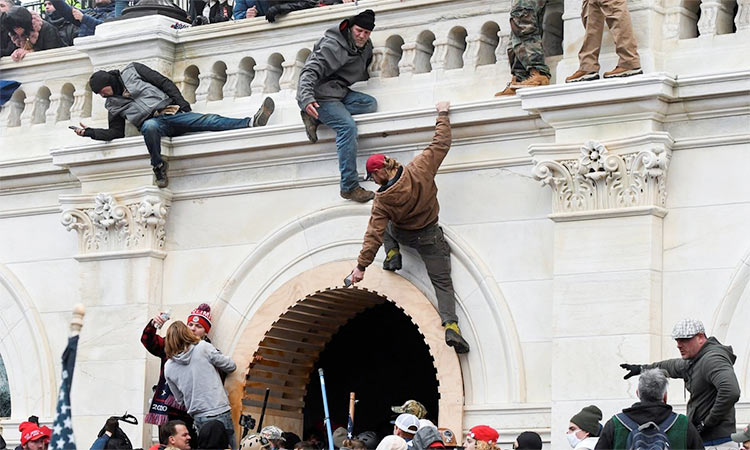 Supporters of President Donald Trump climb the West wall of the the US Capitol on Jan. 6, 2021, in Washington. File/Reuters


Last Thursday, when President Joe Biden delivered his address commemorating the violent assault on the US Capitol, he was accompanied by two vice presidents. One was his running mate, Kamala Harris, the first woman, the first Asian-American and first Black person to hold that office and whose election the would-be-insurrectionists wanted to block.

The second was Alexander Stephens, the former vice president of the Confederacy — the last time Americans violently opposed the government — whom the state of Georgia chose to honour as one of two notable people from the Peach State, as all states do. Stephens is perhaps best known for his odious “Cornerstone” speech, wherein he said about the Confederacy that “its foundations are laid, its cornerstone rests, upon the great truth that the negro is not equal to the white man; that slavery subordination to the superior race is his natural and normal condition.”

Stephens was nothing short of a traitor to the United States and the Union imprisoned him after they drove old Dixie down. But then Andrew Johnson, Lincoln’s successor as president, pardoned him and Georgia later elected him governor, an office in which he served until his death.

The Confederates deserve nothing but scorn and hatred. But after the end of Reconstruction, America moved on and let the seditionists who tried to destroy the Republic off the hook. And the veneration of the Confederacy — as well as other racists, enslavers and segregationists — is why talks about how history will harshly judge insurrectionists ring fairly hollow. Throughout history, Americans have chosen reconciliation rather than restitution and too often, it means whitewashing history in a way that venerates some of the worst people in our past. One only needs to look at some of the other people honored in the Capitol.

The Capitol insurrection was not the first time forces of white nationalism and reactionary politics tried to overthrow a government. In 1898, a group of white Democrats in North Carolina successfully overthrew the fusion government in Wilmington, which had been possible because of an alliance between Black Republicans and white populists.

The coup d’etat destroyed the offices of the Black newspaper in the town and successfully installed white members into the government of Wilmington. Not unlike the right-wing media machine that pushed the Big Lie, white-owned newspapers spread Democratic propaganda while Charles Brantley Aycock whipped up voters into a frenzy.

Instead of punishment, Aycock was handsomely rewarded with the governorship of the state. His likeness adorns the Capitol and for years he was remembered simply as the first “education governor” of the state, with his support for segregation waved off as a technicality.

When I was a student at the University of North Carolina, a dorm hall was even named for him (it was only recently removed.) Aycock’s veneration after inciting a coup was a potent reminder for Yankees like myself: North Carolina belonged to whites and it should stay that way.

South Carolina isn’t much better. Anytime I am on the Senate side of the Capitol, I am greeted by John C. Calhoun’s portrait perpetually scowling, as if the presence of Latinos, Black people and women repulses one of the most loathsome men to ever serve in the Senate.

Slavery had no better defender than Calhoun, who argued that “in the present state of civilization, where two races of different origin, and distinguished by color, and other physical differences, as well as intellectual, are brought together, the relation now existing in the slaveholding States between the two, is, instead of an evil, a good — a positive good.” On long days between votes, I count how many places in the Capitol bear his likeness (so far, I’ve found three).

The list of horrendous people who committed atrocities against their fellow Americans that are venerated in the halls of power in Washington are too numerous for me to list.

There’s the enslaver president Andrew Jackson, whose genocide of Native Americans earned him Tennessee’s statue. Mississippi found Jefferson Davis, the president of the Confederacy, worthy of one of its own. But perhaps the one that reminds me most of America’s priorities is not one of a white supremacist, a slaveholder, a Klansman or another would-be murderer; it’s the one of Gerald Ford, the president who pardoned Richard Nixon for his crimes in Watergate.

Michigan’s choice to honor Ford shows how America often values “moving on” from the crimes of elites in the name of unity, rather than holding those elites accountable in the pursuit of a more perfect union.

Ford was by all accounts a good man, which makes his valuing civility by pardoning someone who abused the presidency even more enraging. The refusal to hold Nixon accountable is the exact spirit that has allowed Republicans to let Donald Trump escape largely scot-free after he threatened the lives of Democrats and Republicans alike.