No room for defeat in Trump’s ego - GulfToday

No room for defeat in Trump’s ego 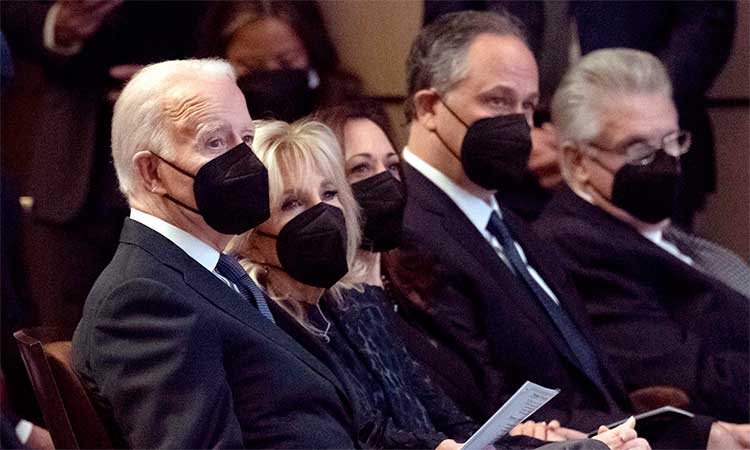 Writing in the Washington Post, self-identified conservative columnist Max Boot cited President Joe Biden’s comment in his January 6th address in the Capitol that Donald Trump “has created and spread a web of lies about the 2020 election … because his bruised ego matters more to him than our democracy or our constitution. He can’t accept he lost.” Indeed!

Echoing Biden, Boot says Trump’s “all-encompassing ego will not allow him to admit that he was repudiated by more than 81.2 million voters” and makes the point that his Republican backers “seem just fine with that.” Instead of offering voters a lengthy party platform during the 2020 election campaign, the Republican party issued a statement pledging to support Trump’s “America First” programme.

This revealed that the party, founded to elect Abrahim Lincoln, has simply become a cheerleader for Trump, no matter what he does or says or what US citizens believe.

However, a YouGov/CBSNews poll conducted at the end of last month, almost a year after the insurrection that gripped the Capitol in Washington, showed that 83 per cent of adults disapproved of the actions of the rioters. Eighty-one per cent of Democrats but only 34 per cent of Republicans expressed strong disapproval while 42 per cent said they “somewhat” disapproved.

An ABC/Ipsos poll revealed that 72 per cent thought the Capitol attack threatened US democracy although the figure was high because 96 per cent of Democrats took this view while only 45 per cent of Republicans did.

During and promptly after the outrage, Republican lawmakers where angrily critical of Trump for inspiring the riot.

They, along with Democrat colleagues, were trapped in the building before Capitol police whisked them to safety.

However, blaming Trump soon gave way to denial, blaming everyone but Trump, and trying to disappear the violent assault on the legislature and the threat to the election of Joe Biden to the presidency and the US democratic system of governance.

Instead of trying to rein in Trump, his loyalists sought to clear his name so he could persevere with his false claim that the 2020 election was “stolen.” Having made their commitment to Trump, they cannot accept he lost as this would also “bruise” their fragile egos.

Trump’s ego is fragile because he was bullied by his father into believing that his children must not become “losers.” Admitting defeat was not acceptable. Therefore, when Trump was confronted with his defeat in the 2020 presidential election, he cried foul and claimed the election was rigged and “stolen.” This line appealed to his followers who did not want to accept that their hero could be beaten and has sustained them for more than a year. Trump intends that the fiction of a stolen election should be retained through this year’s mid-term elections when all members of the House of Representatives and one-third of the Senate are up for election or re-election.

He has also been dropping heavy hints that he will stand again for the presidency in 2024 but he will wait and see that he has no chance of losing this election before he commits.

A second Trump term would be a disaster for both the US and the world community. He is widely seen around the globe to have been the “worst president” in US history.

As he had no real programme of his own, he pandered to the reactionaries of the Republican party by reversing progressive policies on the environment and climate change. This set back efforts in the US to clean up polluted land, rivers and air, and shift from fossil fuels to solar, wind and water energy. And, since the US is regarded as a global leader, Trump encouraged other countries to disregard limits on emissions and pollutants.

He denied the threat posed by COVID-19 early on, thereby enabling the pandemic to spread across the US — infecting 58.5 million and killing 832,000 US citizens — and to take hold wherever infected US citizens travelled outside their country.

While vaccines were developed in the US during Trump’s presidency, his dismissive attitude toward Covid — despite his battle to survive it and his decision to have the jab — led many of his followers to refuse vaccination and encouraged people elsewhere to reject vaccination.

In the US, there are millions of people who have long believed their political representatives in the capital do not take their concerns into account. Consequently, there is longstanding anti-Washington resentment across the country.

In recent decades this sentiment has combined with the alienation of politically marginalised white people who want to maintain white supremacy in a country where Hispanics, Asians, Middle Easterners and blacks have been gradually intruding into white space, securing university education, taking up professions still dominated by whites and enjoying prosperity.

Meanwhile, many whites with lower levels of education, remain trapped in less affluent urban or rural locations and in manual or semi-skilled occupations some of which do not yield high salaries.

Military reservists, policemen, and firemen were among the rioters.

This shift has produced racism among Republicans – but, apparently not Democrats — against any group which is not considered white. This includes light-skinned Asians and Muslims. The 2021 rioters at the Capitol were overwhelmingly white and a few individuals were particularly nasty to black policemen on duty during the insurgency.

While a strident minority of the Trumpites are violent and a large percentage consists of evangelical Christians, the majority is simply determined to stick by Trump whom they believe can reassert white control and keep non-whites in check.

Republican politicians who want to hold onto their seats in the House and Senate know they have to kowtow to Trump’s voters whatever this means for the good of the country and the survival of US democracy. For them, the good of the country does not mean sharing power with non-whites and democracy is a hollow concept that has done nothing for them.