Some anti-vaxxers opt for physical intimidation 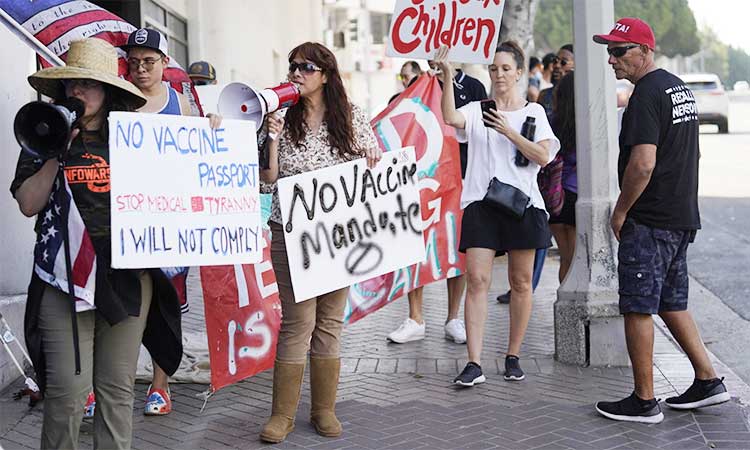 “It was a terrifying experience,” Kristina Lawson says. The president of the Medical Board of California, Lawson was recounting how she was stalked and intimidated by men who identified themselves as representatives of America’s Frontline Doctors, an anti-vaccine organisation.

Inside the parking garage attached to her San Francisco Bay Area law office last Monday evening, she says, four men jumped out of an SUV that had been parked head-to-head with her car.

Wielding cameras and recording equipment, they confronted her as she tried to get into her car to drive home.

That was at the end of a day that she said had begun with a white SUV parked across from her driveway, and a drone flown over her house.

“They watched my daughter drive herself to school and watched me walk out of my house, get in my car, and take my two kids to school,” Lawson wrote on Twitter. “That evening ... they ambushed me in a dark parking garage when they suspected I would be alone.”

She said the men identified themselves to her as associates of America’s Frontline Doctors, a prominent anti-vaccination group that has promoted nostrums to treat COVID-19 such as hydroxychloroquine and ivermectin, which have been found to be useless for the purpose, and opposes mask rules. She says the organisation’s logos were visible on their jackets and microphones.

The men told police that they just wanted to interview Lawson — but she says they had never reached out to the Medical Board’s press office or her law firm to request an interview. She says a private investigator working with the men told Walnut Creek police that “they are producing a video about me that will include footage of my house and neighbourhood and, of course, me.”

Lawson said through a spokesman that she “decided to go public about what happened to me to shed light on these reprehensible, unacceptable tactics of intimidation.”

Sadly, she’s not alone in feeling harassed. Anti-vaccination activists have become more intimidating and physical during the pandemic, in some cases driving public health officials to resign their posts.

“These threats have taken a toll,” the National Association of County and City Health Officials told US Attorney General Merrick Garland in an October letter.

“At least 300 public health department leaders have left their posts since the pandemic began, impacting 20% of Americans,” the organisation said. “In many cases, they have been verbally abused and physically threatened. Their personal information has been shared, their families targeted and their offices attacked. They have been politically scapegoated by some elected officials and either fired or forced to leave their positions for standing up for the health of their communities.”

The organisation called on Garland to step up assistance to local law enforcement agencies to improve threat assessments and enforcement.

In August 2019, California state Sen. Richard Pan (D-Sacramento), was assaulted in Sacramento after he introduced bills tightening the state’s rules for vaccine exemptions. The measures became law. Anti-vaccine activist Kenneth Bennett admitted the offense and posted a video of the encounter on Facebook. Pan was uninjured.

Pan on Wednesday condemned the stalking of Lawson and called for law enforcement to investigate.

The reason for the intensifying strategy of physical confrontation and intimidation isn’t hard to determine. Anti-vaccine activists and opponents of social distancing can’t point to scientific support for their positions, because their claims are fictional.

Instead, they resort to what’s known as the heckler’s veto — shouting down responsible health officials at public meetings, making them fear for their own or their families’ safety if they remain in their jobs, and physical threats. On Jan. 30, anti-vaccine activists forced the temporary shutdown of a vaccination site at Dodger Stadium with a mass protest.

In August 2020, Michelle Mello of Stanford and colleagues attributed the intensity of attacks on several other factors: “The general decline in civility in political discourse in the US, [which] has made ad hominem attacks commonplace and hollowed out traditional ways of grappling with value conflicts,” they wrote. “Social media amplifies such attacks....The environment deteriorates further when elected leaders attack their own public health officials.”

Pan has witnessed what he calls an “escalation of violence” in the anti-vax movement. In 2015, when he introduced a measure to eliminate personal belief exemptions from school immunization requirements, he, his staff and other legislators were subjected to death threats.

When he introduced a measure in 2019 to regulate the issuance of medical exemptions from vaccine requirements, anti-vaccine protests were stepped up, involving pounding on Capitol walls as if the protesters were trying to break into the chambers.

That was the year Pan was assaulted. In September, during debate on the bill, a protester flung a bag of human blood onto the Senate floor from the visitors gallery, forcing the chamber to be closed for decontamination. The Senate competed its work in a hearing room. The bill was passed and signed into law.

“The chamber had been open to the public for 150 years before that,” Pan told me, “and no one could find that that had ever happened before.”

In September, a House subcommittee heard disturbing testimony about attacks on public health officials. “I found, particularly during our recent Delta surge,” said Louisiana State Health Officer Joseph Kanter, “increased anger and threats made to me personally, some very ugly and with obvious intent to track down my family’s personal identifying information.”

Mysheika W. Roberts, the public health officer in Columbus, Ohio, told the panel how her state’s previous health director, Amy Acton, was subjected to “threats and antisemitic slurs at her home” after she advocated business and school closings early in the pandemic, prompting her to resign.

“Her designated replacement never assumed the job after her contact information become known and she was subject to harassment,” Roberts testified. “In January of this year, the state Department of Health’s assistant medical director had shots fired at her home. We are not immune.”

Other witnesses told of the difficulty of managing through the stress and burnout of unprecedented workloads, often without the support of political leaders who support the anti-vaccine groups or are wary of becoming targets themselves.

The attacks on public health officials seem to focus especially on women and those with ethnic backgrounds.

Orange County Chief Health Officer Nichole Quick resigned last year after a series of intimidating threats related to her advocating mask rules, culminating in a protester’s reading her home address aloud at a Board of Supervisors meeting. Quick was provided with a security detail when the protester’s comments were interpreted as a death threat.