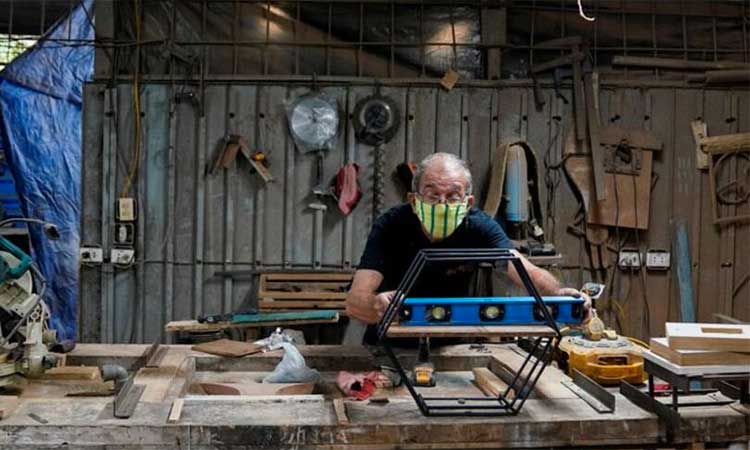 An employee works inside a workshop in Alamar, Cuba. Reuters

Cuban entrepreneurs Henry and Yendri Garcia have long peddled home-made ice cream in their small town of Bauta outside the capital Havana, but now they are dreaming big. Communist-run Cuba in August lifted a ban on private companies in place since 1968, a move that has Cubans scrambling for business opportunities. The Caribbean island’s state-dominated economy shrank 13% over the last two years during the coronavirus pandemic.

Thanks to that groundbreaking reform, the Garcia brothers, known as “ice cream guys” in Bauta, say they hope to move their small, home-based operation, cobbled together with patched up discarded equipment, to a larger facility and increase their workforce of 12 to perhaps 30 or more.

The government has already registered their “Helados Cid” operation as a private enterprise — one of around 900 small- and medium-sized businesses to have been incorporated since September, according to the Economy Ministry. “We’ve been recognised as a company and this increases our reach,” Henry, one of the two brothers, told Reuters. “There will be opportunities that were previously unavailable.” In one of the biggest economic transformations since Fidel Castro’s 1959 Revolution, Cuba is banking on the creation of hundreds — even thousands — of small businesses to help the economy rebound from the devastating impact of the pandemic, soaring inflation and crippling U.S. sanctions heaped atop the Cold War-era embargo.

The new rules, Henry said, mean they can now operate with foreign currency, obtain credit and sell ice cream to hotels, state-run shops and even online.

“My lifelong dream is to have an ice cream factory and an industrial-sized company,” Henry said. There are still plenty of hoops to jump through, according to economists consulted by Reuters. Regulations require companies to go through the state to engage in foreign trade, prohibit entrepreneurs from owning more than one company, and cap individual firms at 100 employees. “There are real shortcomings that I hope they will overcome quickly,” Cuban economist Ricardo Torres, a visiting professor at American University in Washington, said.

“But this is very positive. It marks a new era. You can begin to talk about a mixed economy,” he said. Since the economy minister announced the measures as part of President Miguel Diaz-Canel’s economic reforms in August, scores of businesses have incorporated, allowing them to partake in the state wholesale system, ally with state-run firms, and seek loans and investors. The businesses range in focus from construction, food processing, bakeries, and industrial repair to waterworks, online home delivery and software production. According to the government, some 40 percent are new initiatives while the remainder were already operating, but in legal limbo and with far more limited rights as self-employed “cuentapropistas.”

The government has said it expects to approve thousands more small and medium-sized private businesses over the coming months, such as Cuba’s well-known private restaurants, bars and hostels. Dforja is another small firm benefiting from the reforms. The Havana company of six swapped its focus from building restoration to making patio and indoors iron and wood furniture, with the hope of tapping the export market.

“The reforms have allowed us to mature and regularize the inflow of materials and sales of our product in coordination with state companies,” owner Luis Betancourt said outside his rustic workshop.

“Now we have to work hard and grow from a small to mid-sized company,” he said. Betancourt’s enthusiasm and grit in the face of a major economic crisis that has imports down 40% and inflation soaring is shared by seven Cuban entrepreneurs consulted by Reuters, who say that for the first time they are experiencing state support. But many stumbling blocks remain as Cuba’s nascent private sector takes root.

The pandemic, combined with the US sanctions that limit Cuban access to goods and financing, have cut deeply into “convertible” currency flows needed to import from abroad, where the local peso has no value, said Oscar Fernandez from Deshidratados Habana, which processes dried fruits.

The predicament has forced both state and private enterprise to seek alternatives, and often more costly sources of funding. Larger loans, Fernandez said, are hard to come by. “In our case, working with a state company set up to help small businesses, and a foreign financial services company, we managed to purchase machinery in Europe for a new small factory,” he said. “But I fear we are an exception.”