The conflict over land calls for tact, not force - GulfToday 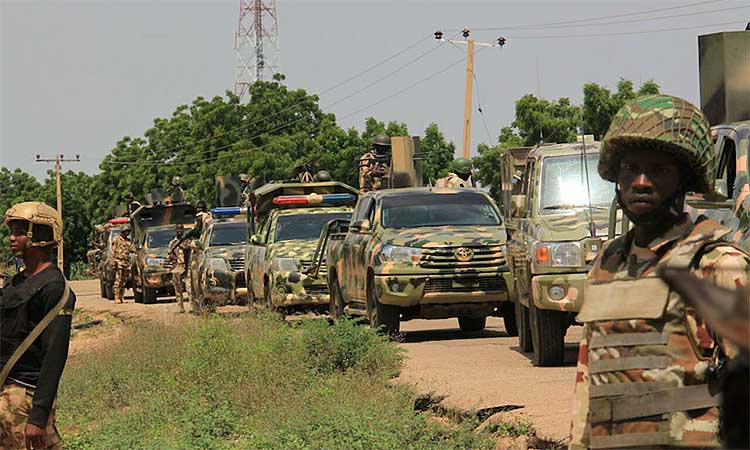 Nigerian soldiers on patrol in a restive area. AFP

The conflict in central Nigeria between herders and farmers, who belong to different ethnic groups, with the herders on one side called Fulanis, and the farmers on the other of Berom and Irigue tribal groups, is complex. The Fulanis are Muslim settlers from the north of the country, and the farmers are Christians who belong to the central and southern regions. The situation is seriously threatening national security in the same way that Boko Haram does.

The conflict has been raging since 2001 and continues twenty years later. While in the earlier period, the herders were under attack for encroaching on farmland, it is now the herders shooting down the farmers and destroying the village. And one of the reasons for this murderous confrontation is climate change. The herders are losing pasture lands due to urbanization, and they are migrating southward and encroaching upon farmland. It is a reenactment of the old historical conflict over migration and land. It would be difficult for herders and farmers to live together if they are competing for the same stretch of land.

The government must intervene to demarcate the areas for herders and farmers, but it is not an easy operation. There is politics, there is ethnic rivalry and there is religious rivalry. It is a problem that will bewilder the best of governments, and Nigeria, the most populous African country and with rich resources, has been battling political divisions of many kinds through its independent history since the 1960s.

The internecine and bloody conflicts that bedevil Africa have mostly been along ethnic lines. But the conflict in central Nigeria encompasses ethnic conflict and goes beyond. It is also about religious differences as had happened in Biafra in the 1960s Nigeria. But here in central Nigeria there is economic battle and climatic one as well.

Neither the herders nor the farmers can have their way because both pasture lands farmlands are getting scarcer. And it is mostly due to the impact of ecological degradation and climate change crisis. The solutions must be broader, holistic. They cannot be sorted out as a truce between people of different faiths and people of ethnic groups. In many ways, it holds a lesson for most parts of the world and to most conflagrations in the world. It is all about the sharing and preserving scarce resources, and here in this case it is about land, which is as scarce as any other resource. If the issue of scarcity is recognised, and it is nobody’s fault that there is not enough land for everyone and there is a need to share, then solutions can begin to emerge.

It may seem idealistic to argue that cooperation is better than competition and conflict that we are witnessing in the clashes between the Fulanis and members of the Berom and Irigue ethnic groups. Cooperation is a compulsion as competition leads to conflict and destruction.

Even if Fulani win over the Berom and Irigue farmers, the problem would not be resolved because if you were to turn farmlands into pasture lands, then there would be famine. And if the herders lose out, then it will cause disaster of another kind. It is the duty of the state to resolve disputes between groups living within its territory. The Nigerian state has not been able to fully fulfil its political obligation.

The conflict between Fulanis and the Berom and Irigue people is erupting from within the state. It is not an external threat. It would need more tact than force to settle the problem. The challenge posed by the extremist Boko Haram is different because the group wants to establish tyranny. In the case of Fulanis and Berom and Irigue it is a genuine economic clash.