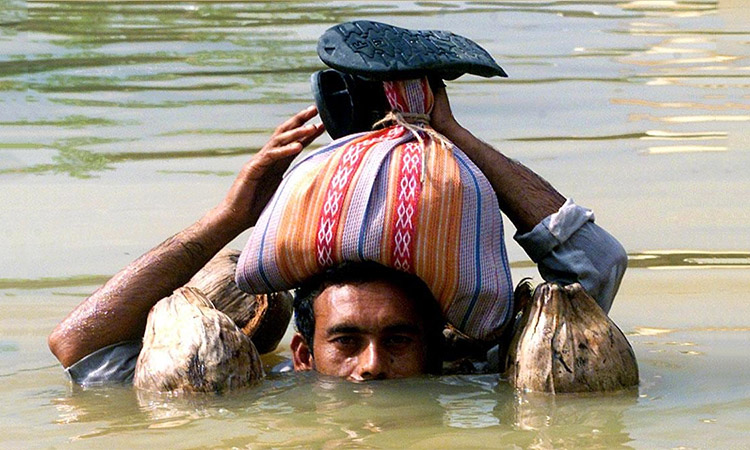 A man wades floodwaters on a street in a southern Indian state. File/Reuters

The rains are not romantic, as often portrayed by gyrating Bollywood stars, for the ordinary in some states of India. The extraordinariness of the element’s ferocity leaves them year after year in ceaseless grief. The rainy season means destruction and death for thousands of ordinary Indians. And the most unfortunate part of the horrible experience is that it is without fail an annual anguish, which is ruthless in character.

We have been grappling with reports of floods playing havoc with people’s lives. Dozens have died or have gone missing after flash floods hit the southern Indian state of Andhra Pradesh. Three buses were washed away during the deluge. Rescue teams pulled out a dozen bodies from the ill-fated buses. At least 18 people were missing, a media outlet reported. Analysts say unpredictable and extreme weather across South Asia is driven by climate change, exacerbated by damming, deforestation and excessive concrete development.

Scores were killed last month when heavy rain pummelled another south Indian state, Kerala. The authorities in the state halted entry to Sabarimala, one of Hinduism’s holiest shrines, due to heavy rain in the area.

Hundreds of devotees had been making the trek to Sabarimala since the shrine opened last week for the annual two-month-long pilgrimage season.

Rising water levels in the Pamba river, considered holy by the pilgrims, forced officials to stop devotees for a day, a leading newspaper reported. Prime Minister Narendra Modi spoke to Andhra Pradesh Chief Minister YS Jagan Mohan Reddy over phone and inquired about the situation in the state due to heavy rain. The chief minister explained about the high intensity situation in Nellore, Anantapur, YSR Kadapa and Chittoor districts due to the heavy rain and the steps being taken by the government. Reddy told the prime minister that Navy helicopters were being pressed into service.

The prime minister assured all help to the state in tackling the situation. Earlier, the chief minister told the state legislative Assembly that the state government would come to the rescue of the people hit by heavy rain and assured them of all help.

During a short discussion on the welfare of the farmers, he said he had directed the district collectors of Nellore, Chittoor and YSR Kadapa districts to be liberal and compassionate towards the needs of the people.

He said two Naval helicopters were dispatched to Anantapur and YSR Kadapa districts each for rescue operations. Kerala and Tamil Nadu have been witnessing heavy rainfall and floods in the past few days leaving a trail of destruction and displacing many families.

Congress party leader Rahul Gandhi, who represents Kerala’s Wayanad in Parliament, asked party workers to help the affected people. “Our brothers and sisters in Kerala are braving heavy rain,” the Wayanad MP said on Twitter. In the neighbouring Tamil Nadu state, its Chief Minister MK Stalin visited the rain-affected areas. He took stock of the situation.

Well, the governments at the central level and the state level should work towards a permanent solution to the yearly menace. Agreed, they can’t control the rain, but they can always channel its flow. True, we need the rain, but not the floods.

The big villain behind the yearly horror is not development, but unplanned development. Greedy builders invariably target the green cover, the removal of which means unimaginable damage to the environment.

Every time one revisits a forest area, one finds parts of it missing. Your guess is right. They are lost to housing colonies. But the roof above our heads will not make much sense if the air we breathe is foul and the much-desired rain becomes unwelcome due to faults in our system.