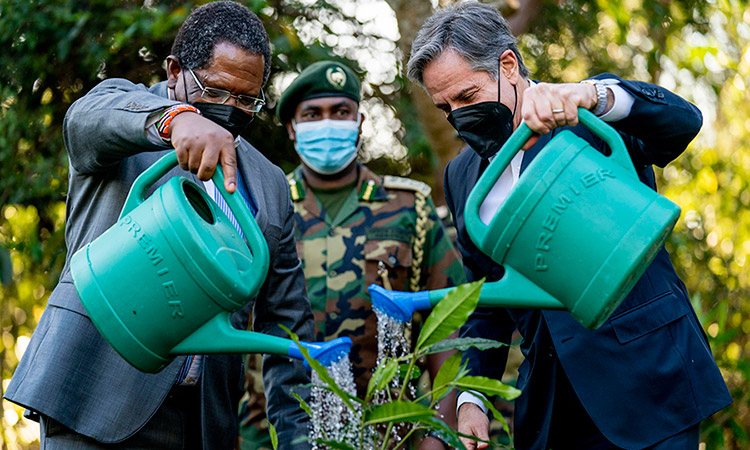 Secretary of State Antony Blinken and Kenya’s Cabinet Secretary for the Ministry of Environment and Forestry Keriako Tobiko (left) plant a tree together during a visit to the Karura Forest in Nairobi, Kenya. Associated Press

Blinken confronted authoritarianism, growing threats from newly energized extremists, and persistent challenges posed by COVID-19 and climate change, all of which have stubbornly resisted various US interventions.

And, nowhere on his three-nation tour last week — to Kenya, Nigeria and Senegal — was he able to escape obvious signs of the intense competition between the US and China: a geopolitical power struggle that has been playing out largely in China’s favour for the past two decades, especially in Africa.

Before leaving the continent at his last stop in Senegal, Blinken said he had been well received by all three leaders he met. But, he allowed that “we have to be judged on what we do, not simply on what I say.”

The limits of Washington’s reach have been evident for some time but have been highlighted in recent months as President Joe Biden has promoted an “America is back” narrative, intended to signal a US return to the international arena and institutions that his predecessor had eschewed.

In Nairobi, much of the secretary’s visit and drives through the Kenyan capital took place in the shadow of or literally underneath a massive, Chinese-financed elevated expressway construction project.

In Abuja, Blinken’s motorcade from the airport passed the giant and unmissable headquarters building of the Chinese Chamber of Commerce in Nigeria, where a top official spoke only partially in jest of playing the US and China off of each other and China’s attractiveness as a partner.

And, in Senegal, the capital, Dakar, was gearing up to host a major China-Africa trade and investment event less than 10 days after Blinken’s departure on Saturday.

While the Biden administration’s efforts to help African nations combat the coronavirus pandemic and encourage climate-friendly policies appear to be making some initial progress, the broader picture is less encouraging.

A new wave of authoritarianism has reversed some positive democratisation trends despite very public US appeals and protests that have been ignored or only partially heeded by leaders in Ethiopia, Sudan and elsewhere, who have appeared unconvinced or uninterested in the administration’s message.

He cited Ethiopia and Sudan as prime examples.

While Blinken did not go to either country on his trip, he raised the crises at each of his stops and, while he was traveling, top American envoys visited both Khartoum and Addis Ababa to press authorities there to back down on anti-democratic actions.

And yet, despite an agreement in Sudan announced on Sunday after Blinken returned to Washington, neither yielded unvarnished success.

In Sudan, conversations between military leaders and the top US diplomat for Africa, Molly Phee, were followed by a new and deadly crackdown on opposition protesters that Blinken was compelled to formally condemn in a statement.

In a hopeful sign, the country’s deposed prime minister, Abdalla Hamdok, then signed a deal with the military that will see him reinstated almost a month after a military coup put him under house arrest. But a key pro-democracy group dismissed it as “a form of betrayal” and Blinken himself was cautious, saying he was “encouraged” but still wanted to see more.

“I urge all sides to further talks and redouble efforts to complete key transitional tasks on a civilian-led path to democracy in Sudan,” Blinken said in a Tweet. “I also reiterate our call for security forces to refrain from excessive force against peaceful protesters.”

In Ethiopia, the US special envoy for the Horn of Africa, Jeffrey Feltman, was rebuffed by Prime Minister Abiy Ahmed in calls for an end to a humanitarian blockade of the northern Tigray region, home to rebels who are now advancing on the capital.

Meanwhile, perennial corruption, abuses of power and a lack of transparency continue to hobble African infrastructure, development and poverty alleviation initiatives championed by the United States.

And, although Biden has spoken of returning Africa to a place of prominence in US foreign policy, other priorities and urgent developments, including pressing matters in Europe, the Middle East, Asia and Latin America, have often crowded it out in the administration’s first 10 months in office.

On Friday, the White House announced that Biden would convene a US-Africa leaders’ summit next year “to strengthen ties with African partners based on principles of mutual respect and shared interests and values.” But the announcement was short on key details such as who would be attending and when it would occur.

And, it came as Blinken reached Senegal, the third and final stop on his first official trip to sub-Saharan Africa, which had been postponed from August, in a telling sign of priorities, during the chaotic US withdrawal from Afghanistan.

Apart from the attention it absorbed in Washington, the implications of the Afghan exit have left some of America’s friends, including in Africa, wondering about the resiliency of their relations with Washington. That has been a particular concern as China has swept in to fill a perceived void in U.S. interest in Africa and a preoccupation with other parts of the world.

That perception, fueled by the Trump administration’s indifference to Africa except through the prism of China’s rapidly expanding power, is something Biden and Blinken are hoping to change. For example, Blinken did not once mention China by name in what was billed as a major speech on Biden administration policy toward Africa that he delivered on Friday.

Yet China was never far from the top of the agenda.

“Our engagement in Africa, with Africa, is not about China or any other third party,” Blinken said in Nigeria. “It’s about Africa.”

“Our purpose is not to make our partners choose, it is to give them choices,” he said in Senegal. “And when people have choices, they usually make the right one.”

“We have a diplomacy of sovereignty from which we do not exclude anyone,” she said. “There is not only one choice. We have many choices.”

And, as Nigerian Foreign Minister Geoffrey Onyeama pointed out, his country and others want the best deals they can get, and often that means looking to China.

“A world of zero risk is not a world in which American diplomacy can deliver,” US Secretary of State Tony Blinken said as he introduced his plan for modernising American diplomacy at the Foreign Service Institute. Part of that plan, he