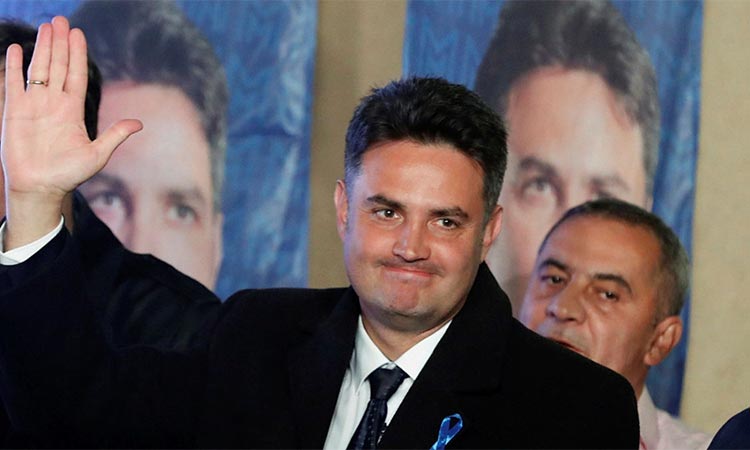 Hungary’s opposition leader wants to restore his country’s frayed ties with the West — and also has a message for American fans of right-wing Prime Minister Viktor Orban.

“Let me state very strongly for all Americans that to be a part of Putin’s fan club doesn’t make you a conservative,” said Peter Marki-Zay, a self-described conservative Christian running against Orban in next year’s elections, in an interview with The Associated Press.

Marki-Zay, the 49-year-old mayor of the small city of Hodmezovasarhely, is leading a diverse coalition of six opposition parties aiming to defeat Hungary’s hard-line leader and his ruling Fidesz party in parliamentary elections scheduled for April.

If elected, Marki-Zay says, he will reverse the closer ties Orban has pursued with autocracies in Russia and China, and improve his country’s relations with the European Union and other Western allies.

“I still stand for Western values, and we cannot accept a corrupt thug ... who betrays Western values and who is now a servant of Communist China and Russia,” he said.

Governing Hungary with a two-thirds majority in parliament since 2010, the right-wing populist Orban and his anti-immigration party have dominated the fractured opposition in all subsequent elections, and cemented their power through changes to election laws, stacking institutions with loyalists and dominating large portions of Hungary’s media.

While Orban’s critics in Europe have warned of an alarming erosion of democracy in Hungary as its relations with EU have frayed, some of his policies — like his staunch rejection of refugees and generous financial support to families with children — have attracted glowing praise from right-wing American commentators.

Fox News host Tucker Carlson broadcast from Budapest for a week this summer, and praised Orban’s migration policy and rejection of the EU’s liberal mainstream. Rod Dreher, senior editor of U.S. publication The American Conservative, spent several months in Budapest this year on a fellowship financed by a right-wing think tank close to Orban’s government.

But Marki-Zay, a devout Catholic with seven children and a former Fidesz voter himself, says that despite Orban’s proclamations of building an illiberal “Christian democracy” in the Central European country, he considers the leader neither a Christian, nor a conservative, nor even a democrat.

“Real conservatives consider Christianity to be something very much (the) opposite” of Orban’s policies, he said.

Orban’s party has accused Marki-Zay of being a left-wing candidate posing as a conservative, a charge stemming from his cooperation with several left-of-center parties in the opposition coalition.

Last week, Marki-Zay travelled to Brussels where he met with some key EU figures — spurring further accusations that he aims to undermine Hungary’s sovereignty in favor of adhering to EU dictates.

A fierce critic of the 27-member bloc, which Hungary joined in 2004, Orban has compared EU membership to the Soviet domination Hungary endured for 40 years, and has pursued close diplomatic and economic ties with China and Russia.

But agreements with those countries on major investment projects have both weakened Hungary’s geopolitical position and come at the expense of Hungarian taxpayers, Marki-Zay says.

He cites as an example a roughly $2.3 billion Chinese-led project to modernize the railway between the capital cities of Hungary and Serbia, part of China’s Belt and Road global trade initiative that is financed by the Hungarian state primarily from a loan from a Chinese state bank.

Another project - a no-bid contract awarded to Russia’s state nuclear energy corporation Rosatom to expand a Hungarian nuclear power plant at an estimated cost of over $11 billion - is “against the national interests of Hungary,” he said.

Sitting in his office in Hodmezovasarhely’s city hall, the candidate wears a blue ribbon on the lapel of his jacket, something he said represents an “anti-corruption fight” against the kind of governance that has plagued Hungary since its democratic transition from Communism in 1990.

Hungary has become a “country with no consequences,” he said, where corruption “has been totally centralised and it’s absolutely a part of the system. It is now organized by the government itself.”

If elected, Marki-Zay says he will immediately join the European Public Prosecutors Office, an independent EU anti-fraud and corruption body, and set up a domestic anti-corruption office in Hungary.

“Most people in Hungary recognise that there is a corruption problem,” he said. “I really hope that in the last four years I have already proven here in Hodmezovasarhely that not all politicians are corrupt.”

Running as an independent outsider with no past ties to Hungary’s liberal opposition parties, Marki-Zay has vowed to tackle corruption even-handedly, whether it was committed by those currently in government or by the earlier Socialist-led governments that are now in opposition. Two of the parties in his own coalition have been associated with past corruption cases.

Recent polling shows the six-party coalition in a tight race with Orban and his party, suggesting the race will be the closest since Fidesz took power 11 years ago.

Still, Marki-Zay says a media environment which favors the ruling party and an imbalance in financial resources will mean elections next year will not be free and fair. In an effort to safeguard next year’s ballot, the opposition coalition has launched a campaign to recruit 20,000 civilian vote counters to be present at every polling station in the country.

While Marki-Zay expects a highly competitive campaign, he believes that his conservative bona fides and political outsider status can mobilize both disaffected Fidesz supporters and undecided voters who are turned off by corruption.

“We have to get the truth to even the last house in the last village,” he said. “We have to give them true and credible information that they were robbed.”

Hungary is a landlocked country in Central Europe. Spanning 93,030 square kilometres (35,920 sq mi) of the Carpathian Basin, it is bordered by Slovakia to the north, Ukraine to the northeast, Romania to the east and southeast, Serbia to the south, Croatia and Slovenia to the southwest and Austria to the west.

Hungary has a population of 10 million, mostly ethnic Hungarians and a significant Romani minority. Hungarian, the official language, is the world’s most widely spoken Uralic language and among the few non-Indo-European languages widely spoken in Europe.

Budapest is the country’s capital and largest city; other major urban areas include Debrecen, Szeged, Miskolc, Pécs and Győr.