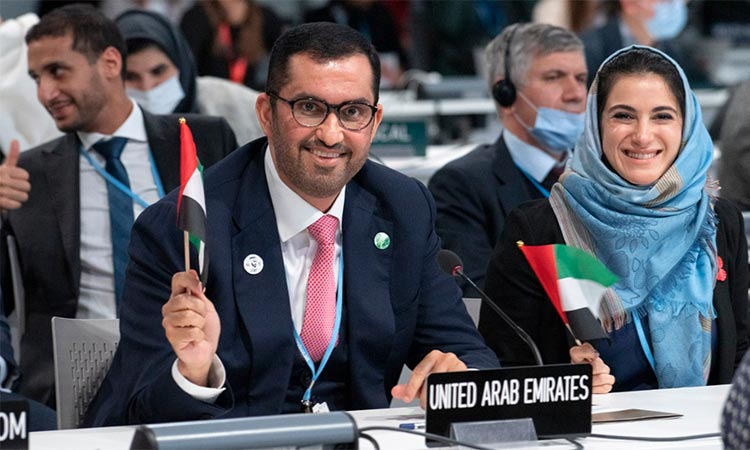 The UAE officials wave the national flag as they receive confirmation for hosting COP28 conference in 2023. (Image: Twitter)

The fact that the UAE is going to host the climate change summit COP28 in two years’ time is heart-warming to say the least. It shows that the nation is very concerned about global warming and seeks ways to curb the crisis, in tandem with many other countries.

“There being no objections; it is decided,” so declared COP26 President Alok Sharma the UAE’s win of hosting the highly significant session of the Conference of the Parties to the United Nations Framework Convention on Climate Change (COP 28) in 2023.

Clearly, the UAE knows full well the dangers of climate change that lie in store and which are increasing with the passage of time. Among them are floods, heatwaves, drought, heavy downpour… the list goes on.

In a report echoing the UAE’s anti-warming efforts, CNBC said that “playing host for COP28 would be an achievement in the climate sphere for the Middle East – the world’s hottest, driest and most water-scarce region. By 2030, temperatures are expected to increase more than twice the global average.”

The global recognition of the UAE’s climate action had been accentuated before by the man steering the helm of this pressing file in the United States, John Kerry, the United States Special Presidential Envoy for Climate. He was in the forefront of congratulations from world leaders and prominent environmental policy-makers to the UAE for its Net Zero 2050 Strategic Initiative, calling it an “incredibly important” step in combating climate change.

It goes without saying that climate action has become a burning issue for the future of humanity at large, and therefore the UAE has adopted a forward-looking vision decades ago to address it in the best possible manner. The ambitious Net Zero 2050 Strategic Initiative announced in October means Dhs600 billion will be invested in clean and renewable energy sources in the next three decades. The groundbreaking move comes in concert with the longstanding vision of the UAE and its people to make a significant contribution to global sustainability efforts while backing economic and human development both at home and around the world.

Global warming is dangerously close to spiralling out of control, a UN climate panel said in a landmark report recently, warning the world is already certain to face further climate disruptions for decades, if not centuries, to come.

The UAE has a strong reputation as a modern, inclusive, and forward-looking nation that despite its geological and desert climate, has remained fully committed to the global efforts to combat climate change and has taken bold actions to accelerate the energy transition.

As Sheikha Shamma Bint Sultan Bin Khalifa Al Nahyan, Founder and CEO of Alliances for Global Sustainability (AGS), says, “I am extremely proud that the UAE has seen its bid to host COP28 granted during the momentous occasion of COP26 in Glasgow. The UAE has been diligently tackling the climate crisis and global sustainability challenges for over three decades. The UAE’s Green Agenda 2015-2030, the National Climate Change Plan 2017-2050, the UAE Circular Economy Policy 2021-2030 and our ongoing environmental legislations and policies are all testament to our nation’s contribution towards making the world a better place.” That is the key term: ‘ a better place.’ Not one ravaged by natural disasters and heat, but where new industries and technologies will be rooted in innovation, where sustainability is key to growth.

It is well mentioned by Suhail Al Mazrouei, Minister of Energy and Infrastructure: “Clean energy is at the heart of our strategy to achieve carbon neutrality by 2050. In terms of achievements to-date in this context, we are proud to be the first country in the region to produce zero-carbon nuclear power, introduce carbon capture technology, and operate the first solar-driven green hydrogen producing facility.”