Ruling the nation of Afghanistan is a challenging task - GulfToday 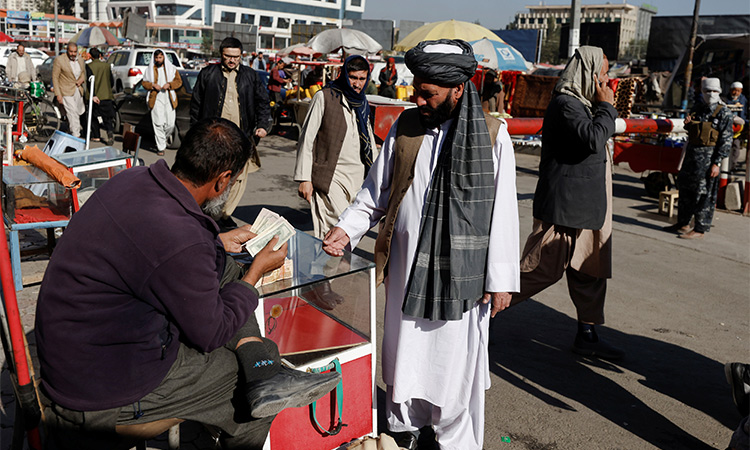 An Afghan currency exchange dealer checks banknotes in front of a man at a market in Kabul, Afghanistan, on Sunday. Reuters

The Taliban is all too clearly not yet up to ruling Afghanistan. Over the past two decades, that country and its citizens have joined the 21st century but the Taliban remains rooted in the distant past. Essentially a village based insurgency capable of waging war against the faltering US and its allies, the Taliban is not up to date when it comes to administering a country which has changed dramatically since the Taliban ruled between 1996-2001.

The US-sponsored government-built schools and health centres recruited and trained personnel to teach and treat ailments, and promoted the education and employment of women who had been relegated to their homes by the Taliban.

Radios, television, computers, the internet, and mobile phones were introduced and proliferated. Since nearly half of Afghans remained below the poverty line, US, UN and other agencies provided food, medical care, and schooling for needy Afghans in both the countryside and urban centres.

Seventy-five per cent of public spending was provided by foreign grants and loans. According to the World Bank, in 2020, aid flows represented 42.9 per cent of Afghanistan’s $19.8 billion GDP.

The Taliban is in no position to raise this amount of money. The UN Security Council sanctions committee reported that the movement gleans most of its revenue from the cultivation of poppies for making heroin and opium and the smuggling and sale of these drugs. The Taliban also allegedly extorts money from commercial firms and ransom for kidnap victims. Revenues were estimated at $300 million to $1.5 billion a year.

While this may be enough to fund a low-tech insurgency, it is not sufficient to run a country with a population of 40 million. If the Taliban is to secure international recognition, the Taliban can no longer base its finances on activities which negatively impact not only neighbouring countries but also harm people all around the world.

So far, the Taliban leadership has adhered to its narrow ideology and refused to alter the authoritarian, regressive behaviour it has always adopted. However, unless the leadership makes major concessions, the new rulers of Afghanistan will remain outliers ostracised by the international community and Afghans will suffer.

After signing Donald Trump’s February 29th, 2020, deal for US withdrawal from Afghanistan, the Taliban leadership had 17 months to get its act together and work out a plan for a post-US regime. The Taliban failed for several reasons. Its leaders were not all in one place. The spiritual-political leaders were based in Quetta in Pakistan and politicians negotiating with the US remained in Qatar while their hardline allies — and rivals — in the Haqqani network were in the field in Afghanistan. The men on the ground had both guns and money.

Even when some of the exiled leaders returned to Afghanistan after the US pullout, there was no early agreement on appointments to the interim government and how to proceed once this was accomplished after weeks of wrangling.

There still is no firm line of command. One minister can proclaim a policy one day and be contradicted by another the next. This means the interim cabinet has not laid down policies on key issues, creating confusion and consternation at home and abroad.

The issue that has captured the world’s attention is the Taliban’s regressive approach to girls and women. This could impede the de facto government’s bid for recognition. Afghan females living in rural and poorer quarters of cities are traditionally relegated to their homes and to the care of menfolk and children. Since Taliban leaders and foot soldiers come from the countryside they cannot easily and quickly change their misogynistic mindset. The Taliban, which desperately seeks international recognition, could be ostracised for failing to make the change.

While the Taliban has been compelled to permit women to return to jobs they are trained to perform — such as issuing passports — the Taliban argues it is not yet safe for girls to return to secondary schools and women to universities. The claim has convinced no one, because it was used to ban female education during the whole of its first period in power.

Before the Taliban’s return, UNICEF had tripled the number of schools functioning in Afghanistan, including in areas under Taliban control, with 10 million children in attendance, four million of them being girls. Since schools reopened, boys and girls have resumed primary education, but girls have been effectively barred from secondary schools and women from public universities while female teachers have been told to remain at home.

Both students and teachers are clamouring to return to school but are denied entry by Taliban gunmen who act as guards. The Taliban does not comprehend that a society cannot function properly and move forward unless its women are educated and educate their children.

The Taliban is not only imprisoned by its narrow vision and limited experience with modern ideas, moderates among its leaders are also constrained by hardliners and by the presence of more extreme groups, notably Daesh-Khorasan (Daesh-K), al-Qaeda, and radicals of the Pakistani Taliban who have stepped up their campaign against the Islamabad government since the Afghan Taliban took power in Kabul.

The Taliban’s efforts to provide security have been disrupted by repeated Daesh-K attacks, including the bombing which killed 170 Afghans and 13 US troops outside Kabul airport during the US evacuation.

Since then, Daesh-K has struck two Shia mosques at times of prayer, killing scores of Shias who are reviled by Daesh-K, and a Sunni mosque during the memorial service for the mother of the Taliban government’s deputy information minister. Daesh-K considers Taliban members “apostates,” and accuses the Taliban of abandoning jihad for a negotiated deal with the US. So far, the Taliban has failed – or been reluctant – to curb Daesh-K because it is tied to the Haq- qani network, which sits in the cabinet, and the Pakistani Taliban.

The Afghan Taliban has to challenge its detractors not seek to appease them. The Taliban’s rule and recognition depend on its evolution into a 21st century movement.