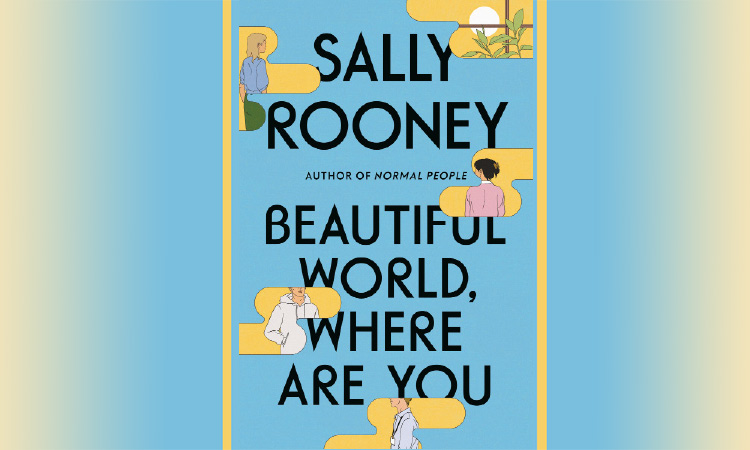 ‘Beautiful World, Where Are You’ by Sally Rooney.

Award winning Irish author Sally Rooney has caused a stir in the literary world by refusing a bid by a leading Israeli publisher to translate her best-selling novel. “Beautiful World, Where Are You” into Hebrew and bring it out in Israel.

This book, her third, sold more than 40,000 copies in five days when it was launched in early September. Rooney, 30, is regarded as one of the world’s most successful young authors and her earlier books have been translated into languages other than English and turned into BBC television series.

In explanation, she made it clear that she is not targeting Hebrew as a language but Israel itself. “It would be an honour for me to have my latest novel translated into Hebrew and [made] available to Hebrew-language readers. But for the moment, I have chosen not to sell these translation rights to an Israeli-based publishing house.”

Two earlier novels, “Normal People,” and “Conversations With Friends,” were released in Israel by Modan, which has close ties to both the Israeli government and military. Modan said that translations of these two books had sold very well in Israel.

Rooney stated, “I understand that not everyone will agree with my decision, but I simply do not feel it would be right for me under the present circumstances to accept a new contract with an Israeli company that does not publicly distance itself from apartheid and support UN-stipulated rights of the Palestinian people.”

While the Irish branch of the Jewish Voice for Peace welcomed her decision, pro-Israel commentators were harshly critical. She has been smeared by being called “antisemitic,” anti-Jewish, and, because she has not boycotted human rights violators China or Russia, hypocritical. Gitit Levy-Paz, a fellow of the pro-Israel nonprofit Jewish People Policy Institute, wrote, “The very essence of literature, its power to bring a sense of coherence and order to the world, is negated by Rooney’s choice to exclude a group of readers because of their national identity.”

She has shed Modan because she has, belatedly, joined the cultural ostracism of Israel mounted by the Palestinian Boycott, Divestment, and Sanctions Movement (BDS) designed to put presure on Israel to end discrimination against and human rights abuses of Palestinians living under its rule.

Two developments have motivated her to take a stand recently: Israel’s May blitz on Gaza, slaying 256 Palestinians and killing 13 in Israe, and reports issued by Israel’s B’Tselem rights organisation and Human Rights Watch. These reports, she argued, “confirmed what Palestinian human rights groups have long been saying: Israel’s system of racial domination and segregation against Palestinians meets the definition of apartheid under international law.”

In July, Rooney was one of scores of artists to sign a letter calling on governments to “cut trade, economic and cultural relations” with Israel and to end backing for the country’s military.

Rooney is in good company.  Longstanding BDS supporters include rock musician Roger Waters, filmmakers Mike Leigh and Ken Loach, US actor Mark Ruffalo, Canadian activist Naoim Klein, and author of “The Color Purple,” Alice Walker who has also refused to have her book published in Israel. Pakistani-British writer Kamila Shamsie also refused to grant an Israeli publisher rights to her novel, “Home Fire.” In 2019, she was honoured with the German Nelly Sachs Prize for her literary work but the award was rescinded due to her support for BDS.

Rooney was born in 1991 to a well-read couple and grew up in the small town of Castlebar where she joined a writers’ group when she was 15, realising then that she was determined to be a writer. She earmed her BA in English literature and MA degree in American literature at Trinity College, Dublin. She and her husband, John Prasifka, a mathematics teacher, dwell in Castlebar.

Rooney has only belatedly joined BDS and become an overt supporter of Palestinian rights. She had every opportunity to adopt this course of action for years. She was well acquainted with the cause as one of her fictional characters attends a pro-Palestine demonstration, a normal activity in Ireland.

She is Irish, lives in a country where 1,300 fellow artists, citizens and parliament support the Palestinian cause, and there is a strong Palestinian movement. Furthermore, as she claims to be a Marxist, she must mix with Marxists and leftists who are pro-Palestinian. Her recent declaration is, as the saying goes, “better late than never.”

BDS cofounder Omar Barghouti told The Intercept that the “first significant instance of cultural boycott against apartheid South Africa was a 1964 declaration signed by twenty-eight Irish playwrights who committed not to permit their work to be performed before segregated audiences in South Africa.”

In May, Irish lawmakers declared the construction of Israeli colonies in occupied Palestinian territory to be de facto annexation, prompting Israel to accuse Dublin of being “blatantly one-sided and simplistic,” the Irish Times reported.

In June, Ireland’s parliament went further by voting unanimously to condemn Israel’s “defacto annexation” of Palestinian territory in the West Bank and East Jerusalem, making that country the first in the European Union to adopt this line. In response, the Irish tricolour was hoisted over Ramallah’s municipality.

The Jewish Voice for Just Peace (Ireland) welcomed Rooney’s stand and tweeted that the group stands “in complete solidarity with [her] decision.

Many Irishmen and women empathise with Palestinians because the two peoples have a common history and experience of colonialism, ethnic cleansing and discrimination. After initially supporting the Zionists, Ireland’s political leaders came to realise what Britian’s intentions were when, in 1937, it proposed the partition of Palestine and the creation of a Jewish state in that country.

Speaking to the League of Nations, Irish independence leader and prime minister, Eamonn De Valera denounced Britain’s policy pf partition which had divided Ireland 15 years earlier. He dubbed partition “the cruelest wrong that could be done to any people.” A decade later, Ireland was hostile toward the UN partition plan rammed through the UN General Assembly by the US. Since Israel’s 1948-49 war of establishment and the displacement of 750,000 Palestinians, Ireland has been a stalwart political and financial supporter of the UN agency caring for the refugees.