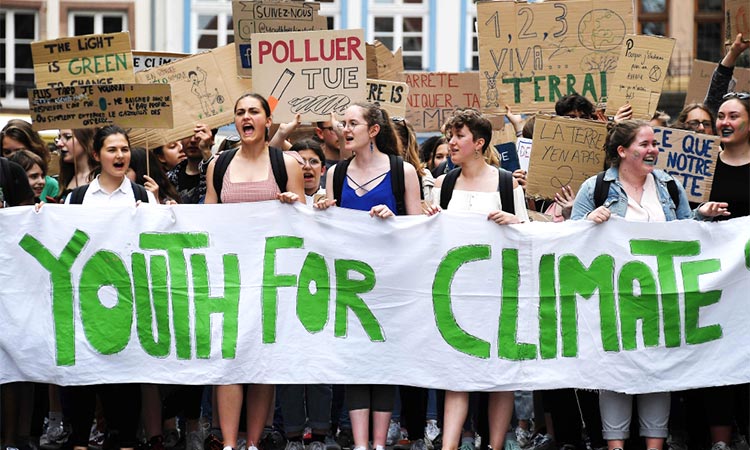 Climate change is now every nation’s top security threat, including the US. In World War II, Adolf Hitler’s armies marched across Poland, France and Russia, but they were driven back. America’s World War II generation is referred to as the “greatest generation.” They stepped up. Americans accepted a military draft, rations on gasoline and other products, and higher taxes to win the war.

During the Cold War, scientists began to consider the ecological impact of a nuclear exchange. Carl Sagan and others worried that a war might function like a chain of volcanic eruptions simultaneously pushing smoke and dust into creating a global cover that could trigger a deep plunge in global temperatures, a “nuclear winter.” If one side launched a massive first strike and the targeted nation did nothing, Sagan’s team envisioned that nature’s reaction to that first strike — burning forests, burning cities — would push vast smoke and dust into the upper atmosphere, where the winds would carry this globally, threatening perhaps two growing seasons and humanity’s food supply.

Nature is not a passive realm that will take whatever we dish out. We must see that nature — the dynamic system of ecological and climatic forces — is a superpower.

If climate disruption is the key national security threat America now faces, then that is the key standard by which we must measure our national leaders. This is a national and global security moment, a critical inflection point in world history. Humanity stands at a point that is critical to the habitability of our planet.

We witness Earth’s security being harmed by a small set of individuals who are thwarting America’s mobilisation to engage the mounting climate disruption threat. It is important to name them.

First, we have US Sen. Mitch McConnell, a Republican out of Kentucky. President Barack Obama made a deal with China to get it to accept caps on carbon emissions that smoothed the pathway to the success of the Paris climate agreement. This is a historic international treaty committing almost all the world’s nations to some levels of carbon emissions reduction. It is not at all enough, but it has been a beginning. Obama’s pledge was that America would push the Clean Energy Plan that would incentivise states to shut down coal-fired power plants.

McConnell’s response was to message all Republican Party members to attack “Obama’s War on Coal.” Kentucky has the second largest number of coal miners of any state in the country.

Second, we have Donald Trump, a real estate developer and consummate performer from New York who became president. He sucked up to the coal industry, denied the reality of climate change and yanked America out of the Paris climate agreement in exchange for photo-ops with happy coal miners.

Across his four years, he employed climate change denial as a weapon in his divisive stoking of the culture wars. He filled his Cabinet with fossil fuel CEOs — Rex Tillerson as secretary of state, Scott Pruitt as chief of the Environmental Protection Agency, Rick Perry as secretary of energy and Mike Pompeo as secretary of state, a former Kansas congressman who was named the “congressman from Koch” because of the Koch Industries’ lavish support.