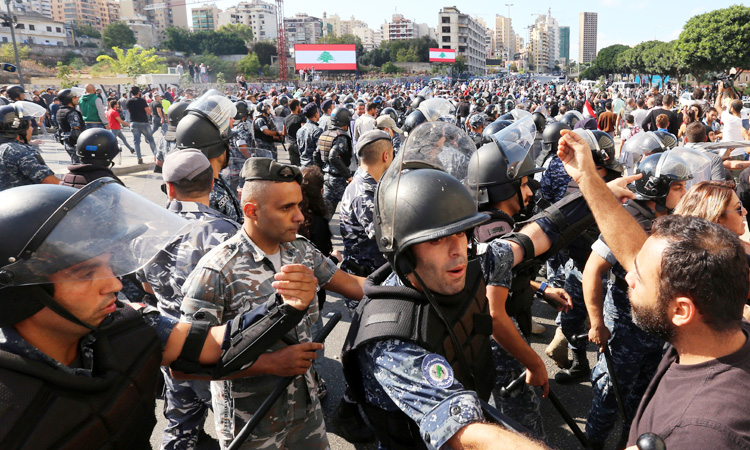 The protests were by the Shiite groups, Hezbollah and Amal. They were angry with the chief investigator, Tarek Bitar, who had issued summons to former ministers, as part of the inquiry into the 4 August 2020 explosion of 2,750 tonnes of ammonium nitrate stored since 2013 near the airport, which killed 200 people, injured thousands more and destroyed property worth millions of dollars.

The Lebanese Army has come out on the streets, but the civilian population is gripped by fear. The sniper gunmen are being identified with Lebanese Forces, the Christian party which holds 15 of the 64 seats in the parliament, and its militias have been active during the civil war. But the leader of the Lebanese Forces, Samir Geagea, condemned the shooting and attributed the sniper shooting to “lack of gun control”.

This is a dangerous outburst, whether sectarian or not, and it would drown Lebanon, struggling to recover from its economic and political woes, into chaos which it can ill afford. Interior Minister Bassam Mawlawi has warned, “Civil peace is not to be messed with. The clashes started with gunshots by snipers. Someone was shot in the head, and this is not acceptable.”

The anger and dissatisfaction of the Hezbollah and Amal is on two counts. First, that Bitar is singling out ministers who belong to their parties and therefore the investigation takes on a partisan colour. Secondly, they argue that Bitar is violating constitutional norms because according to the constitution, ministers and president can only be tried by the Supreme Council (Article 80, which specifies “The Supreme Council, whose mission is to impeach the President and Ministers…”). This is the second time that a demand has arisen to replace the investigator. Judge Fadi Sawan was replaced in February on a similar complaint.

Three ministers have been summoned by Judge Bitar: former prime minister Hasan Diab, former finance minister Ali Hassan Khalil, and former interior minister Nouhad Al-Machnouk. The former interior minister challenged Bitar’s summons in the Court of Criminal Appeals and legal representatives of Khalil and former public works minister Ghazi Zeaiter filed a suit in the Civil Court of Cassation. According to Beirut’s Daily Star newspaper, Bitar set the dates for questioning the former ministers after their suits were rejected by the Court of Cassation. Bitar, the paper says, has set the dates for questioning the three ministers before parliament reconvenes on October 19, and the former ministers, who are members of parliament, would regain their parliamentary immunity.

There is a general and popular demand that those in power at the time of the explosion last year which caused loss of life and property should be brought to book. But it seems that partisan concerns are indeed coming in the way. It is indeed a mystery as where the ammonium nitrate in such a huge quantity came into the country and why it was stored and why sufficient precautions were not taken given the fact that it is highly explosive stuff. The conspiracy theories are bound to flourish and the only way to counter it is to unearth the facts.

The internal problems of Lebanon become complicated because too many foreign countries and interests have legitimate and illegitimate stakes in the country, and there are too many internal divisions. Reconciliation inside Lebanon can happen much more easily if outside powers adopt a ‘hands off Lebanon’ policy. It is true that divisions inside the country run deep but the task of reconciliation is made difficult if others fish in troubled waters.