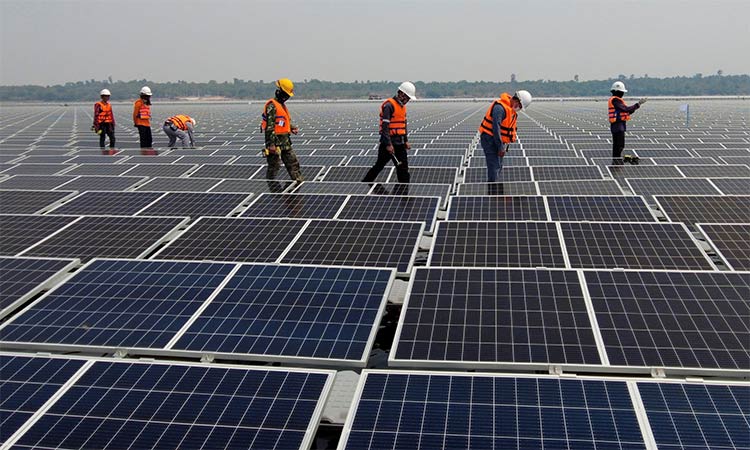 A study by the Institute for Energy Economics and Financial Analysis (IEEFA) states that to achieve the net-zero target by 2050 through large-scale adoption of renewable energy projects, India needs at least 65,000 sq. km of land for installing solar and wind power projects across the country.

As Mongabay-India reports, if India were to implement a net-zero target by 2050, an area equivalent to about half the size of the Indian state of Tamil Nadu – is required, according to this study.

The report notes the potential for land-use conflict that can arise over renewable energy installations, even in sparsely populated areas, slowing the rollout of infrastructure across the country. It considered the land-use implications of India’s energy transition and important location choices. It reviewed current land-use studies and then outlined likely future requirements based on the mid-century scenarios presented in recent reports.

According to the International Energy Agency (IEA), the path to net-zero emissions is narrow. It requires the massive deployment of all available clean energy technologies between now and 2030. A country can be considered net-zero when its greenhouse gas emissions are sequestered either through natural or artificial carbon sinks. The United Nations has said that net-zero emissions have to be achieved by 2050 to limit global temperature rise well below two degrees Celsius above pre-industrial levels.

The IEEFA report adds that “whether or not India commits to a formal mid-century net-zero emissions goal this year, it will continue adding very substantial solar and wind generation capacity over the next three decades.” It emphasized that part of this capacity “will replace thermal generation, but some will be required to meet population and economic growth.”

We need an unprecedented transformation of how energy is produced, transported and used globally, an IEA report has said. The world’s first comprehensive energy roadmap shows government actions to rapidly boost clean energy and reduce fossil fuel use can create millions of jobs, lift economic growth and keep net zero in reach. However, climate pledges by governments to date – even if fully achieved – would fall well short of what is required to bring global energy-related CO2 emissions to net zero by 2050 for a chance to limit global temperature rise to 1.5 °C, according to the report, ‘Net Zero by 2050: a Roadmap for the Global Energy Sector’.

The study elaborates how to transition to a net zero energy system by 2050 while ensuring stable and affordable energy supplies, providing universal energy access, and enabling robust economic growth. It sets out a cost-effective and economically productive pathway, resulting in a clean, dynamic and resilient energy economy dominated by renewables like solar and wind instead of fossil fuels. The report also examines key uncertainties, such as the roles of bioenergy, carbon capture and behavioural changes in reaching net zero.

The Roadmap sets out more than 400 milestones to guide the global journey. These include no investment in new fossil fuel supply projects, and no further final investment decisions for new unabated coal plants.

In the near term, the report requires immediate and massive deployment of all available clean and efficient energy technologies, combined with global innovation acceleration. It calls for annual additions of solar PV to reach 630 gigawatts by 2030, and of wind power to reach 390 gigawatts. Together, this is four times the record level set in 2020. For solar PV, it is equivalent to installing the world’s current largest solar park roughly every day. A major worldwide push to increase energy efficiency is also essential, resulting in global rate of energy efficiency improvements averaging 4% a year through 2030 – about three times the average over the last two decades.

Most of the global reductions in CO2 emissions between now and 2030 in the pathway come from technologies readily available today. But in 2050, almost half the reductions come from technologies that are currently only at the demonstration or prototype phase. This demands that governments quickly increase and reprioritise their spending on R&D – as well as on demonstrating and deploying clean energy technologies, putting them at the core of energy and climate policy.

A transition of such scale and speed cannot be achieved without sustained support and participation from citizens, whose lives will be affected in multiple ways. New energy security challenges will emerge on the way to net zero by 2050 while longstanding ones will remain.

India to be largest source of energy demand growth to 2040: IEA

It is expected that the country’s consumption is likely to double as its gross domestic product (GDP) expands to an estimated $8.6 trillion by 2040.