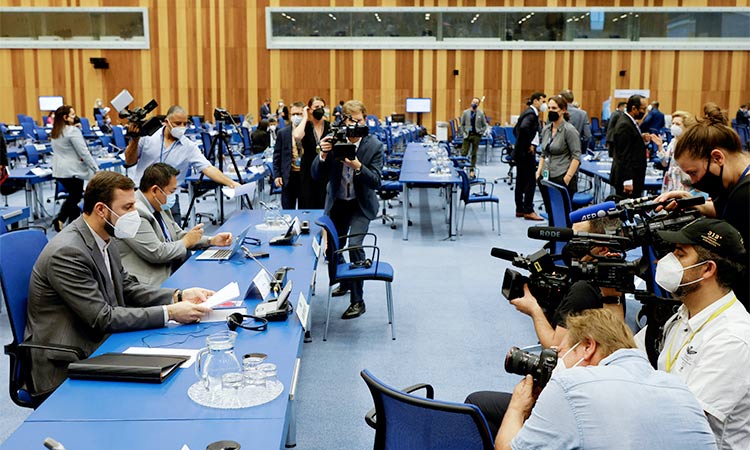 Iran’s ambassador to the International Atomic Energy Agency (IAEA) Kazem Gharibabadi waits for the beginning of a board of governors meeting at the IAEA headquarters in Vienna, Austria. File/Reuters

In anticipation of the resumption of the Vienna talks on rescuing the 2015 agreement limiting Iran’s nuclear programme in exchange for sanctions relief, the new hardline government in Tehran has signalled readiness to recommit to the deal by allowing UN inspectors to continue virtual monitoring of Iran’s nuclear sites.

A crisis was averted by a September 12th agreement by Tehran to permit the IAEA to replace expiring memory cards in monitoring cameras installed in nuclear sites. The deal was reached during a last-minute visit to Tehran by Rafael Grossi, director of the International Atomic Energy Agency (IAEA). The expired cards will remain in Iran until a new agreement is negotiated in Vienna that will lift unilateral US sanctions on Iran.

The meeting took place after the IAEA reported to its board of governors that Iran had not cooperated fully over recording equipment or provided an explanation for the discovery of minute particles of radioactive materials at locations which were not part of the nuclear programme. Censure by the board threatened to prompt Iran to pull out of the Vienna talks. They were launched during the presidency of moderate Hassan Rouhani, who championed the agreement reached during the US Obama administration but was undermined when Donald Trump pulled out in May 2018 and reimposed sanctions.

When Trump abandoned the deal, Iran had expected that the other signatories — France, Britain, Russia, China, and Germany — would find ways to evade sanctions and stick to the terms of the accord. This did not happen. Those challenging the US risked punitive sanctions. Iran waited a year before gradually pulling out of its commitments by enriching uranium to a higher level of purity than allowed, creating stockpiles beyond prescribed limits, introducing advanced centrifuges for enrichment and reducing IAEA access to declared nuclear sites.

While campaigning for the presidency, Democrat Joe Biden pledged to return the US to the nuclear deal, which he had supported as former President Barack Obama’s vice president. However, Biden did not honour this promise. Instead of re-entering the accord soon after taking office, Biden has stuck to the Trump policy of trying to use US re-entry as leverage to secure concessions from Iran on its involvement in regional affairs and its ballistic missile programme. At the same time, the Biden administration has slapped additional sanctions on Iran and Iranians, creating a climate of deep mistrust and prompting Rouhani’s team to put forward Iran’s own demands which are certain to be upheld by the new administration’s negotiators.

Before returning to the constraints imposed by the deal, Tehran wants proof that sanctions have been lifted and that the US treasury cannot interfere with Iranian oil export payments, access to banks, trade, and investment. This is precisely what happened during the Obama administration after the nuclear deal was implemented in 2016, depriving Iran of key benefits. If Biden does eventually return to the deal, Iran also wants guarantees that the US will not, again, withdraw from the nuclear deal under successor administrations. This is an impossible demand.

Biden’s monumental miscalculation provided an opportunity for Iran’s hardliners to eliminate moderate candidates in that country’s June presidential race in order to ensure the victory of ultra-conservative Ebrahim Raisi. He has appointed nuclear deal opponent Ali Bagheri Kani as the new deputy foreign minister for political affairs, replacing deal proponent Abbas Araghci, who led six rounds of talks in Vienna. Although Bagheri Kani may not conduct the negotiations, he is certain to push for a tougher line on the lifting of sanctions than Araghci.

Before his appointment, Bagheri Kani headed the judiciary’s human rights council, a post for which he was chosen by Raisi. Bagheri Kani comes from an influential family and is said to be related to Iran’s supreme leader Ayatollah Ali Khamenei – whose support decided the fate of the nuclear deal in 2015 and whose attitude will determine Iran’s policy on this issue going forward.

Circumstances have made Khamenei a pragmatist. On the domestic front, the Trump/Biden sanctions regime has hammered Iran’s economy hard. This has caused Tehran to pivot East. To offset lost earnings from oil exports, Iran has concluded a 25-year economic cooperation agreement with China. Iran also hopes US sanctions will erode as other potential trading partners have grown fed up with Washington’s intervention in their economic choices, particularly since US sanctions have deprived governments, firms, and individuals of lucrative business opportunities in Iran.

On the regional front, Iran has held talks with Saudi Arabia with the aim of ending rivalries and reducing confrontation. These talks could promote negotiations to end the war in Yemen where Iran gives limited backing to the rebel Houthis and the Saudis sponsor the government of President Abed Rabb Mansour Hadi.

Tensions in Lebanon between Iran-allied Shia Hizbollah and Saudi supported Sunnis could ease since, after 13 months, Beirut’s politicians have finally formed a government.

The Iran factor could become particularly important if the Taliban allows Afghanistan to become a rear base for Arab Al Qaeda and other radical factions seeking to destabilise this region. Daesh, which already has a presence in Afghanistan, counts itself an enemy of the Taliban, while Al Qaeda-offshoot Hay’at Tahrir al Sham, which rules Syria’s northwestern Idlib province, and similar groups congratulated the Taliban on its victory over the US and may count on free passage through Iran.

On both the international and regional fronts, Washington’s position as a reliable partner and protector has weakened considerably due to the Trump presidency and the Afghan debacle and could encourage allies around the globe to re-evaluate ties, including to Iran.