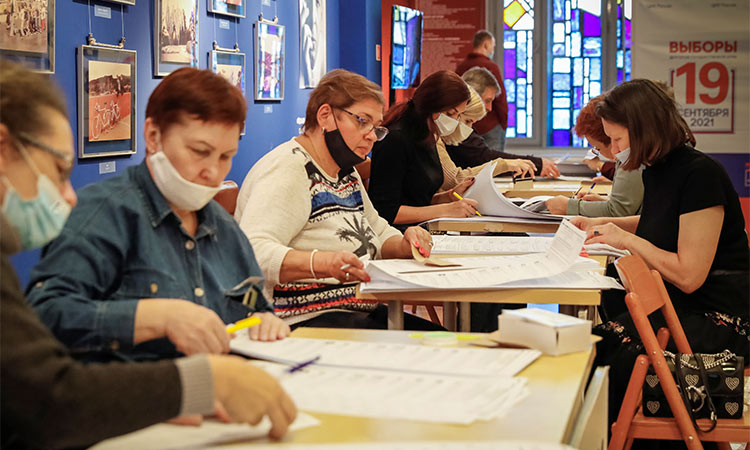 Members of a local election commission check ballots at a polling station ahead of a three-day parliamentary vote in Moscow on Thursday. Reuters

After a few weeks of desultory campaigning but months of relentless official moves to shut down significant opposition, Russia is holding three days of voting this weekend in a parliamentary election that is unlikely to change the country’s political complexion.

There’s no expectation that United Russia, the party devoted to President Vladimir Putin, will lose its dominance of the State Duma, the elected lower house of parliament. The main questions to be answered are whether the party will retain its current two-thirds majority that allows it to amend the constitution; whether anemic turnout will dull the party’s prestige; and whether imprisoned opposition leader Alexei Navalny’s Smart Voting initiative proves to be a viable strategy against it.

“There is very little intrigue in these elections … and in fact they will not leave a special trace in political history,” Andrei Kolesnikov, an analyst at the Carnegie Moscow Center, told The Associated Press.

Putin, however, on Thursday urged Russians to vote, saying in a video message that “election of (the Duma’s) new composition is undoubtedly the most important event in the life of our society and country.”

With 14 parties fielding candidates for half of the Duma’s 450 seats that are chosen by party list, the election has a veneer of being genuinely competitive. But the three parties aside from United Russia that are expected to clear the 5% support necessary to get a seat rarely challenge the Kremlin.

The Kremlin wants control over the new parliament, which will still be in place in 2024, when Putin’s current term expires and he must decide on running for reelection or choosing some other strategy to stay in power.

The other half of the seats are chosen in individual constituencies, where independent candidates or those from small parties such as the liberal Yabloko may have stronger chances. These seats are also where the Navalny team’s Smart Voting strategy could make inroads.

The programme sidesteps ideology in order to undermine United Russia, simply advising voters which candidate other than the ruling party’s is the strongest in a single-mandate race.

“Voting to harm United Russia is not a meaningful goal, not a goal to choose another candidate whom you ideologically support,” Kolesnikov said. But it showed potency in its inaugural use in 2018 when opposition candidates won 20 of 45 seats in the Moscow city council, and a year later when United Russia lost its majorities in the councils of three large cities.

However, it’s unclear how widely it will be used this year after authorities blocked access to its website. The service remains available through apps, but Russia has threatened fines against Apple and Google to remove the apps from their online stores. The Foreign Ministry last week summoned US Ambassador John Sullivan to protest election interference by American “digital giants.”

Blocking the website was the latest move to neutralize the Navalny operation, which was Russia’s most visible and determined opposition organization, capable of calling sizable protests throughout the country.

Navalny himself was jailed in January upon returning to Russia from Germany where he had been recuperating from nerve-agent poisoning; he was subsequently sentenced to two and half years in prison. A court later outlawed Navalny’s Foundation for Fighting Corruption and a network of his regional offices as extremist organizations, a verdict that barred people associated with the groups from seeking public office and exposed them to lengthy prison terms.

In August, Russia added the independent vote-monitoring group Golos to its list of foreign agents, a move that does not block its work but strongly suggests it should be regarded with suspicion.

The Organization for Security and Cooperation in Europe, whose election-monitoring missions are widely regarded as authoritative, will not send observers for the parliament vote, saying that Russia imposed excessive restrictions.

The Elections Commission ordered voting expanded to three days, concluding on Sunday, to reduce crowding at the polls amid the coronavirus pandemic. Critics say the decision raises the chance of ballot manipulation. Commission head Ella Pamfilova rejects the accusation, saying there will be “total video surveillance” of polling places and that ballots will be in secure containers.

Other ethical concerns also hover over the election. According to the state-funded pollster VTsIOM, more than one in 10 workers say they have been given directives by their bosses to vote. In St. Petersburg, a candidate from the Yabloko party named Boris Vishnevsky, who is running simultaneously for the Duma and a regional legislature, discovered that there are two other men using that name opposing him in each race — one of whom is a member of United Russia, according to the newspaper Novaya Gazeta.

Although polls indicate that general approval for United Russia is low, the party is expected to ride to an overwhelming first place in the new parliament. The independent Center for Current politics predicts it will score 299-306 seats - down from the 343 it currently holds but within the range of the 303 seats needed to change the constitution.

The center’s prognosis suggests that most of the seats lost by United Russia would be picked up by the Communist Party, the second-largest parliamentary faction. But the party largely conforms to the Kremlin line, as do the two other parties likely to get double-digit seats.

“The Communists themselves are not very dangerous,” said commentator Sergei Parkhomenko on Ekho Moskvy radio. The party is “a tool for imitating an opposition movement.”

Allegations of widespread voting fraud sparked large protests in Moscow and St. Petersburg after the 2011 Duma elections. But with opposition groups neutered, the prospect of unrest this time appears remote.