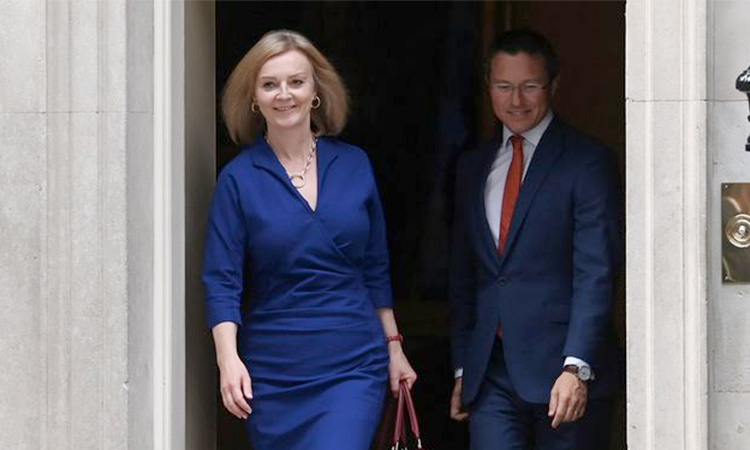 Britain’s new foreign secretary is a free-trade champion who once opposed Brexit and whose straight talk and willingness to wade in on the culture wars has made her popular among grassroots Conservative voters.

Prime Minister Boris Johnson nominated Liz Truss to be the country’s top diplomat on Wednesday —a plum reward for her work securing a raft of post-Brexit trade deals after Britain’s full departure from the European Union this year.

Truss, 46, is only the second woman to be foreign secretary after Labour’s Margaret Beckett, who was appointed by Tony Blair in 2006.

However, she will not have long to bask in her promotion, with major international challenges demanding her immediate attention. Top of the list is the Afghan crisis, which ultimately brought down her predecessor Dominic Raab, who faced a barrage of criticism for being on holiday as the Taliban advanced.

Longer-term issues include tensions with Russia and China, post-Brexit relations with Brussels, the Iranian nuclear issue and the fate of dual nationals imprisoned by Tehran.

Truss has been a staunch supporter of Johnson, who made her minister for international trade immediately upon becoming prime minister in July 2019. In this post, she became the face of the new “Global Britain” strategy, acquiring key diplomatic skills as London looked beyond the EU for closer trade ties, notably with Asia.

Truss campaigned to remain in the EU during the 2016 referendum, but has since spoken about the economic opportunities of Brexit.

She helped ink deals with countries including Japan, Australia and Norway, although the big prize of an accord with the United States remains elusive.

Her website describes as a “self-styled ‘Disruptor-in-Chief’ who is “not afraid to speak her mind, and believes liberating people to start and grow businesses without burdensome red tape is the key to our economic future”, winning her plaudits among Tory voters.

But some MPs characterised her former Department for International Trade (DIT) as the “Department for Instagramming Truss” because of her prolific output on the social media site, accusing her of self-promotion.

She is generally regarded as having performed competently in her trade role, but critics say her deals fail to plug the losses of leaving the EU’s huge single market and were little more than an update of existing deals with the bloc.

The ambitious Truss failed twice in her bid to become and MP before finally succeeding in 2010, when she was elected as representative for the east England constituency of South West Norfolk, four years after being voted in as a local councillor in southeast London.

She was promoted to government in 2012, becoming a minister in the education department, and has since held a series of portfolios. She was environment minister from 2014 to 2016, where she was mocked for a speech in which she vaunted British cheese, saying it was a “disgrace” how much the country imported.

She then became the first female justice minister before taking on the role of chief secretary to the Treasury. Her political journey began at the prestigious University of Oxford, where she graduated in politics, philosophy and economics.

But at Oxford, she was an active member of the Liberal Democrat party.

By her own admission, her switch shocked her left-wing maths professor father and nuclear disarmament campaigner mother, whom she accompanied to demonstrations as a child.

“One of his colleagues sent an email when he found out saying: ‘I see your daughter’s become a T***’ (Tory),” Truss told The Guardian of her father.

Truss, though, saw the Tories as a better fit for her low-tax beliefs, and quickly became earmarked for success within the party. “My personal philosophy is about giving people the opportunity to make their own decisions,” she told the Guardian in 2009.

She revealed more of her beliefs in a 2020 speech in which she called for “a new approach to equality... firmly founded firmly on Conservative values” and took aim at the cultural influence of “post-modern philosophy”.

“Whether it’s ‘affirmative action’, forced training on ‘unconscious bias’, or lectures on ‘lived experience’, the Left are in thrall to ideas that undermine equality at every turn,” she said.

Truss, who grew up in Leeds, northern England, worked for 10 years in the energy and telecommunications sectors before entering politics. She is married to an accountant and has two daughters.