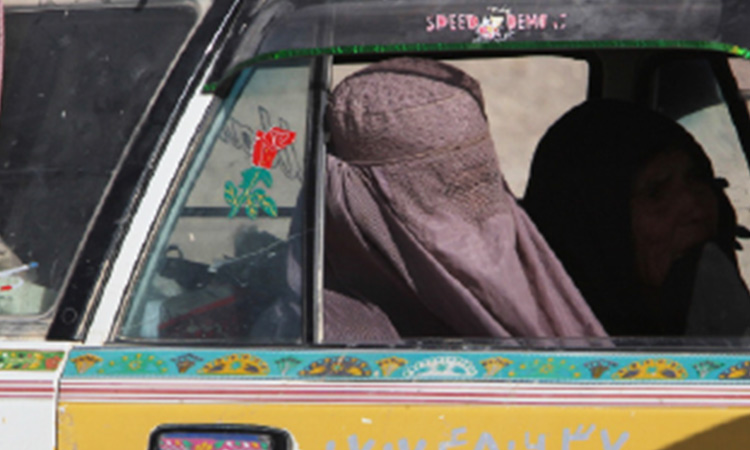 An Afghani woman watches from her car as the men of the vehicle are searched at a checkpoint near the village of Kolk, Afghanistan.

Defending the Taliban’s appointment of an all male caretaker cabinet, the movement’s spokesman Zikrullah Hashemi told Tolo news, «A woman can›t be a minister, «It›s like you put something on her neck that she can›t carry. [Women] should give birth and raise children.”

When the Tolo presenter pointed out that women are half of the society, Hashemi asked, “What kind of half?”

He criticised women who have mounted protests against the cabinet. He claimed they are not representative of Afghan women. To demonstrate this contention a small group of women shrouded totally in black chadors were allowed to demonstrate in favour of the regime after the Interior Ministry banned unlicensed protests in Kabul, Herat and elsewhere and whipped and beat head-scarfed women critical of the regime.

“We are not women of yesterday. We want our rights. We faced violence..but we will continue our fight,” stated activist Diba Farahmand in response to the attacks.

Ahead of taking power, the Taliban had promised that women would exercise their rights in accordance with Muslim canon law, Sharia. But, the Taliban relies on its ultra-conservative interpretation of Sharia which incorporates Afghan tribal social and cultural traditions.

Afghanistan was once in the vanguard of reform. After the government decreed equal rights for women during the 1970s, a minority of urban women adopted Western dress, travelled alone, attended university and took up employment outside the home. While a few brave young women dared to walk along Kabul’s streets in mini-skirts, most of their sisters in the city remained in purdah. Since 90 per cent of Afghans lived in the countryside, women were forced to wear burkas in public, had limited contact with men and had few educational opportunities.

This swing between modernisation and retrenchment has been a feature of Afghan life for more than a century. The country’s early moderniser was Soraya Tarzi (1899-1968) who was born in exile in Damascus into a reformist Afghan family. After the Tarzis returned to Afghanistan she met and married Prince Amanullah who succeeded the throne in 1926. With her husband›s full support, she became the prime mover of a campaign to raise the status of women.

He broke with tradition by dissolving the royal harem and made her his sole wife and full partner and their marriage the model of monogamy. The couple campaigned against the burqa and veil and polygamy, called for the education of girls, founded a girls’ school, a hospital for women, a welfare society and a theatre. In 1928, the king and queen were both awarded honorary degrees by Oxford University. The reformist drive was, however, undermined by conservative tribal figures who were encouraged by Britain. In 1929, the king abdicated and the couple went into exile in Bombay, where their youngest daughter, India, was born, before settling in Italy. Now 91, she continues with humanitarian work and promoting women’s rights.

Afghan’s contemporary women’s rights champions have modelled themselves on Queen Soraya. The first Afghan woman to rise to the post of provincial governor, Habiba Sarabi is a hematologist as well

as a reforming politician. During the first period of Taliban rule, she and her children fled to Peshawar in Pakistan. She went underground to teach girls in Afghan refugee camps and slipped across the border to educate girls. While governor, she promoted tourism in Bamyan province, the poorest in the country made infamous by the Taliban’s destruction of two ancient statues of the Buddha. She established a national park in Bamyan in the hope it would attract visitors.

Before taking up this post, she was Afghanistan’s second Women’s Affairs Minister. In 2020, she joined the negotiating team which tried and failed to make peace with the Taliban. It had meant to take over by military means rather than share power with secular politicians.

Former parliamentarian Fawzia Koofi — who once entertained the idea of running for president — fled house arrest in Kabul on one of the final US evacuation flights to Qatar. As a lawyer struggling for women’s rights, she twice escaped assassination. Born in a remote north-eastern province, Koofi was the first girl in her family to go to school and became the first woman to become deputy speaker of the legislature. She also joined the Qatar-based negotiating team.

Koofi is in despair over the abandonment of Afghanistan by the US and its NATO partners and the take-over by the Taliban. She tweeted, “After 20 yrs of US/NATO presence & all promises made to our civil society, women & youth, that chapter has abruptly closed. Our wealth is our young girls and boys. Those in [Afghanistan] and those who will come back. Taliban, hear us out. We must rebuild together! This land belongs to all of us.” Unfortunately, the Taliban has been deaf to such pleas.

Daughter of a fighter who lost a leg in the battle against the Soviet occupation, Malalai Joya grew up as a refugee in Iran where, at an early age, she worked in Afghan refugee camps and learned about the hard lives of exiles. She returned to Taliban-ruled Afghanistan in 1998 and became director of the Organisation for Promoting Afghan Women’s Capabilities in Herat and Farah provinces. She stayed on after the Taliban fell in late 2001.

When elected to the 2003-04 Loya Jirga (convention) held to ratify the new constitution, she spoke against the inclusion of domineering warlords and criticised the US for permitting their  participation. Despite an uproar, she was elected to parliament in 2005. After her swearing-in, she again complained about “the presence of warlords, drug lords, and criminals in parliament.”

At that time she was dubbed by the BBC “the most famous woman in Afghanistan.” In 2007, she was suspended from the assembly for three years for her comments about fellow lawmakers and was repeatedly threatened. In response, she stated, “They will kill me but they will not kill my voice, because it will be the voice of all Afghan women. You can cut the flower, but you cannot stop the coming of spring.” Her words are as true in today’s Taliban-ruled Afghanistan as under the failed US-backed regime.