Clash of interests between Apple and Epic Games - GulfToday

Clash of interests between Apple and Epic Games 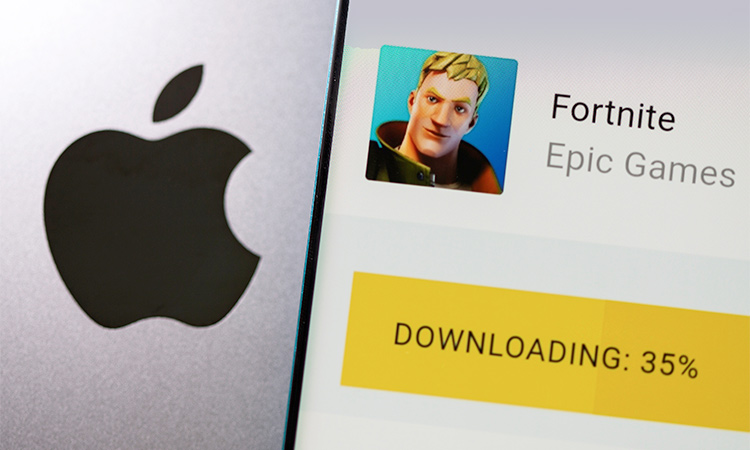 Fortnite game download on Android operating system is seen in front of Apple logo in this illustration. Reuters

The legal battle between Epic Games and Apple, one a videogame Fortnite provider, and the other the owner of Apple Store that dominates the market of all app innovations, fought in a California court for the last one year might appear to be a quarrel between two American tech companies which is of no interest to the rest of the world. Epic Games accused Apple of violating rules of fair competition and forcing other app developers to go through the Apple Store and pay about 15 per cent to 30 per cent to Apple while purchasing videogames of other companies.

Judge Yvonne Gonzalez said that Apple violated California’s competition laws, but that the tech giant was not yet legally a monopolist. But it refused to allow Epic Games a place on Apple Store though Epic Games can establish alternative routes for payment of its wares, and not bound by Apple Store. This has left Epic Games dissatisfied because it had expected an adverse verdict against Apple, and that would have made Epic Games appear a giant-slayer.

Apple has made modifications to its rules that payments have to go through Apple Store. But Epic Games can now function on iPhones without being bound by Apple Store restrictions. Judge Gonzalez has made the interesting observation that “success is not illegal” with reference to Apple’s innovative interventions that gives the company a huge market advantage. A similar case is pending against Google Play Store and Android phones. Experts are of the view that this would dent Apple’s stranglehold and the judgment has opened the space to challenge the tech giants with a monopolist presence in the digital world.

Judge Gonzalez has framed the nature of Apple Store policies in clear but careful language. She said “The Court concludes that Apple’s anti-steering provisions hide critical information from consumers and illegally stifle consumer choice.” And she drew the conclusion that “When coupled with Apple’s incipient antitrust violations, these anti-steering provisions are anti-competitive, and a nationwide remedy to eliminate those provisions is warranted.” She is pointing to either legislation or judicial directions on this specific issue. The reason that Epic Games was not too happy with the judgment is evident. Epic Games wanted the court to declare Apple Store policy to be unfair and therefore illegal. Epic Games CEO Tim Sweeney lamented in a tweet: “Today’s verdict is not a win for developers or for consumers. Epic is fighting for fair competition among in-app payment methods and app stores for a billion consumers.”

Apple has already modified some of the rules on App Stores indicating that Apple cannot ignore the demands and needs of other game developers and the consumers, and that it would have to make space for others however grudgingly.

Tech giants are facing legal challenges. In June this year, Facebook faced an antitrust case filed by Federal Trade Commission (FTC) and attorneys general of 40 states, but Judge James E. Boasberg of US District Court of the District of Columbia threw it out that the case was brought in too late and why the regulators did not block the deals when Facebook acquired WhatsApp and Instagram.

In 1998, Microsoft faced a similar challenge on the issue of monopoly, and the lower court judge had even ruled that Microsoft should be broken up. The verdict was overturned by an appeals court. At the moment the tech giants appear as villains trying to crush competition. But their reign might not continue for too long. There will be challengers and competitors and the digital landscape will change. Meanwhile, it will be an uphill task for the challengers, taking on the established players.