Time could be rife for a Cuban counter-revolution - GulfToday

Time could be rife for a Cuban counter-revolution 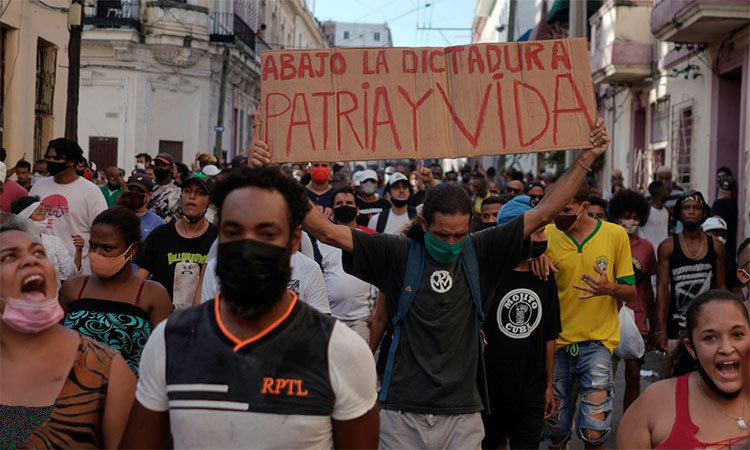 A protester holds a sign echoing the song ‘Patria y Vida’ in Havana on Sunday. Reuters


Is Cuba on the edge of a tectonic shift from Castroite communism to Western-style democracy? Until very recently, it would have seemed unthinkable. But when “Patria y Vida,” a music video sharply criticizing the situation in Cuba, becomes the anthem of massive street demonstrations, the impossible starts to sound possible.

Indeed, the demonstrations in Havana and dozens of other cities and the widespread popularity of “Patria y Vida” (“Homeland and Life”) suggest strongly that the Cuban people are fed up with the false promises of communism and are ready for a fundamental change in their politics and lives.

But are all the conditions present for such a dramatic change? One way of determining that is to compare Cuba with East Germany in January 1989 when the communist boss Erich Honecker boasted that the Berlin Wall would stand for another 100 years. In November of that same year, the Wall came tumbling down, and East Germans welcomed a new era of political and economic freedom.

East Germany was ready for a revolution because: It had suffered decades of economic decline and deprivation; Communist leaders admitted they no longer believed in communism, which had served as the ideological raison d’etre for East Germany and the other communist satellites behind the Iron Curtain; Soviet leader Mikhail Gorbachev announced that Moscow no longer recognized the Brezhnev Doctrine and would not come to the aid of a faltering communist regime.

Lutheran pastors sparked the massive public demonstrations that demanded the communist bosses relinquish their power and authority; US and other Western sanctions helped reduce East Germany to the economic level of a third world country complete with rationing of food and clothing.

The courageous example of the pro-democracy students in Tiananmen Square inspired East Germans, especially young people, to launch gigantic anti-communist rallies; West Germany presented a compelling picture of how free enterprise and democracy can produce a free and prosperous country.

So, in comparison, what of Cuba today?

Cuba has been in serious economic decline since the dissolution of the Soviet Union, which had provided billions of dollars in subsidies annually to the island nation. For a while, Venezuela under the Chavez/Maduro regime had propped up Cuba, but Venezuela is now suffering more economically than Cuba. As a result, basic goods are strictly rationed year-round in Cuba.

The rising generation does not care about Fidel Castro and Che Guevara and their vaunted “revolution.” What they know is that communism has failed to put bread on the table.

As never before, culture plays a key role in the politics of Cuba. Representative of the new culture is the San Isidro Movement, whose pro-freedom “Patria y Vida” music video has received more than 7 million YouTube visits in a nation of 11 million.

How successful the Cuban people can be when free is proven by the remarkable performance of the Cubans in Miami, one of the wealthiest communities in America. Their success is proof that freedom works.

What then are the differences between the communist Cuba of today and the East Germany of 1989?

Most Cuban communists still cling to Marxism-Leninism and Fidel Castro’s 60-year-old propaganda, a major source of their political power. Cuban police are willing to use force and even bullets to break up “Libertad!” rallies and demonstrations.

Hundreds of dissident leaders are jailed and separated from the Cuban people.

So, some but not all of the necessary conditions are now present for a Cuban counter-revolution. There are things that the United States and its allies can do to further the cause of freedom and democracy in Cuba.

The US should maintain the economic sanctions against Cuba, for the best of reasons: They expose the inability of the communists to provide the people with basic necessities.

The US should form an international coalition of democratic nations that condemns communist Cuba for its crimes against humanity, past and present, and steps up international pressure for a free Cuba.

It may seem that a Cuba libre is not possible, but we must remember East Germany and the boast of its communist boss that the wall would stand for another century. The widespread July 11 demonstrations including the amazing popularity of “Patria y Vida” signaled that Cuba is at the beginning of the end of the communism that has oppressed it for six decades.